Before seeing the new documentary The Salt of The Earth, I’d never heard of photographer Sebastião Salgado. Turns out I’ve seen a number of his photos over the years, but I never knew a thing about who took them. Photos like this one, of a gold mine in Brazil: 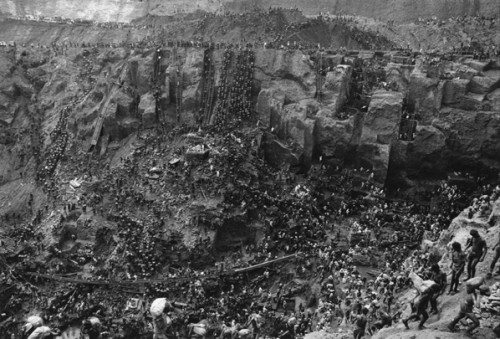 Or then again, was I only remembering the opening scene from Powaqqatsi? Possibly. I’ve definitely seen this photo: 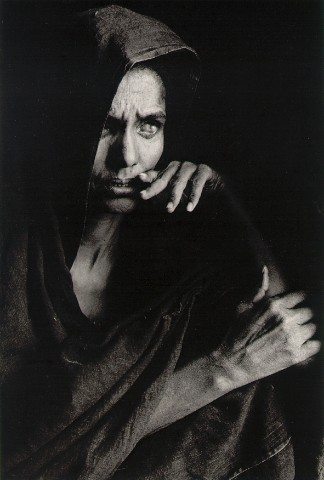 This is the photo Wim Wenders, who directed The Salt of The Earth with Salgado’s son, Juliano Ribeiro Salgado, saw years ago at an exhibit and bought, so moved was he by the image. He hadn’t known of Salgado either, but soon learned much, and eventually met him, and when, years later, Salgado and his son, who’d been filming his father with the intention of creating a documentary about him, asked Wenders to help create the film, Wenders accepted gladly.

So The Salt of The Earth is in no way a critical study of Salgado and his art. It’s a film made by people who know and love him, and as such it’s less an examination of Salgado than a description. It’s a story, is what it is, of a man and his life and his photography, and as a story it’s fascinating and moving. 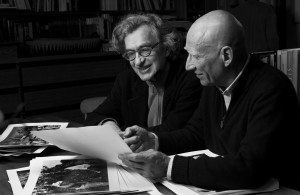 Wenders and Salgado check out the photos

As a young man in Brazil in the ‘60s, Salgado started out as an intellectual studying economics. He married his first love, Lelia, and with her went to France, where he intended to continue his studies. But Lelia got herself a camera. Salgado found he liked taking pictures with it. He liked it a lot more than he liked studying economics. So they spent all of their money on photography equipment, and Salgado embarked on the first of his many journeys around the world.

He and Lelia devised themes around which his work would center: The Other Americas was the first. Salgado lived with and took photos of peoples in South America, photos like this: 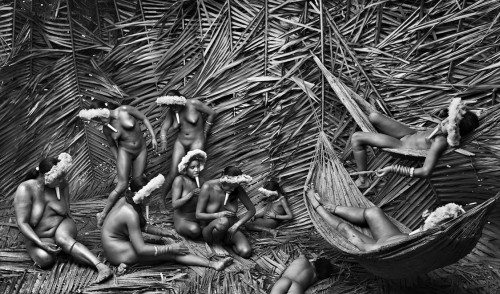 From there he moved on to workers around the world, then migrations of people, those forced from their homelands by war or natural disasters, then the oil fires of the first Iraq war (as filmed by Herzog in Lessons of Darkness), all eventually leading to his documentation of the peoples fleeing genocide in Rwanda. He spent much time in Africa over the years, but it was his time photographing Rwandan refugees that seems to have soured him on the human race.

When he returned to photography, it was with a project called Genesis, his subject the natural world as it might have existed millions of years ago. It was during this part of his life that he and Lelia returned to Salgado’s childhood home, farmland in Brazil, and replanted it with millions of trees, bringing back to life what had become a dry, desolate wasteland. The results of which reforestation are completely amazing and inspiring. 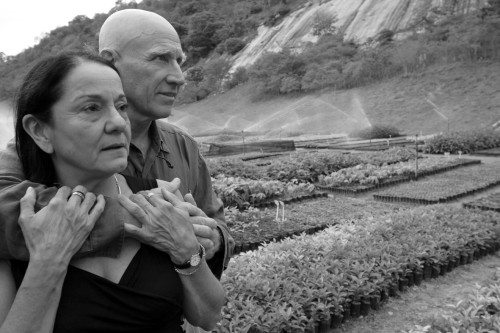 Salgado and his wife, Lelia

The structure of Salgado’s life and the course he charts through choice of photographic projects create a natural dramatic ebb and flow that works great for a movie. It goes from intriguing to compassionate to devastating to utterly emptying to restrorative to hopeful. Has Hollywood bought the man’s life story yet? I can almost hear Ben Stiller begging for the film rights.

Not much more to say about this one. It’s worth going just to see Salgado’s photos on the big screen. It’s opening with a typical slow roll-out across various cities over the next few weeks. Check it out.

(And for more info on Salgado, his art, exhibitions, etc., check out Artsy’s Salgado page here.) 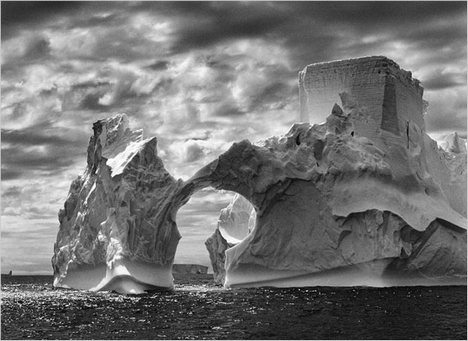