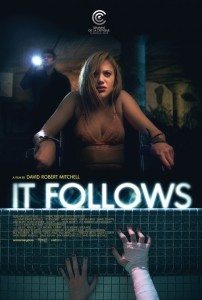 Early on in It Follows, eighteenish-year-old girl Jay (Maika Monroe) goes on a date with her new beau, the twenty-one-year-old Hugh (Jake Weary), to a movie. In line, they play a game: one person picks a person in the crowd they’d like to be, the other tries to guess. Hugh stumps Jay by picking a little kid. Why a kid? Because wouldn’t it be great to to have your whole life in front of you? So says Hugh. Jay reminds him that he’s rather young himself. And they talk about other things until Hugh spots a woman in a yellow dress—a woman Jay can’t see. Uh oh. Hugh panics.

It’s not until their next date that they sleep together, after which Hugh explains, in a rather disturbing fashion, what he’s done. He’s cursed Jay by sleeping with her. She will now be followed. By what? By IT. It comes in the form of different people. They will walk, slowly, toward her. If they reach her, they will kill her. The only way to escape? Sleep with someone else, and they will be followed instead. But if they should die? It’s back to you. 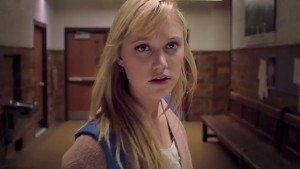 Which as a horror movie set-up sounds pretty run of the mill. Sex will get you killed. Even more obviously, it reads as some kind of STD metaphor, with kids passing on a fatal disease to everyone they screw.

Hugh wishes he were a little kid. Jay reminisces about being young and imagining what it would be like to drive around with a boy. Paul (Keir Gilchrist), childhood friend of Jay and Jay’s sister, Kelly (Lili Sepe), reminds Jay of their first and only kiss, the first kiss for both of them. Conversations all tend towards remembering moments from their younger lives. This is a story of kids on the cusp.

Writer/director David Robert Mitchell is not interested in cheap scares or gore. Aside from the opening sequence, which features a very nasty tableau of gruesome death, there is little blood in It Follows, and still less death. This isn’t a story of kids being picked off one by one. After the opening, only one person dies in the movie.

What Mitchell is doing here is using horror movie tropes to suggest the greatest horror of them all: our own inevitable death. It probably won’t come today, it probably won’t come tomorrow, but it’s out there, it’s coming for us, and it’ll catch up to us eventually, no matter how far or fast we run. We are born, we grow up, and so, it follows, we will die.

Talking over the monsters

With cinematographer Mike Gioulakis, Mitchell evokes the widescreen visual mood of John Carpenter’s Halloween, with its flat light and bland suburban houses lining wide streets (the movie is set in the suburbs of Detroit). And, crucially, he uses as inspiration Carpenter’s method of hiding his killer in the background, out of focus, or far to one side of his widescreen frames.

Another nod to Carpenter is the score, by Disasterpeace, which is partially very modern, loud, and dissonant, and partially reminiscent of Carpenter’s ‘70s music.

The followers in It Follows don’t run. They walk. As do all the best movie killers. One of the scariest scenes is at a lake where Jay and her friends have fled to. They sit on the sand or float in the water while, quite a ways in the distant, a lone figure marches steadily closer. In another scene, at a high school, the camera slowly spins around in a circle. Every time it passes a window, a follower draws closer and closer. Sometimes our heroes don’t even see the followers. But we do.

Mitchell’s style is one of casual realism. There’s no stilted dialogue or acting. The kids are very naturalistic. Parents are absent. I think there’s one scene where two mothers have a brief conversation. Adults in general only show up tangentially in a few scenes.

All we have here are kids, almost adults, but clinging to their youth. 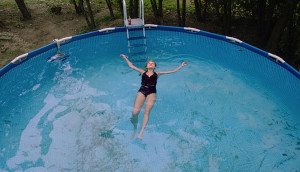 Ah, to be young and carefree

Representive of, perhaps, the womb, two swimming pools figure prominently in the movie. In the beginning, all innocence and youth, Jay swims in the pool in her backyard, one of those big plastic-walled things. She retreats to the pool later on, at a point when she thinks she’s freed herself of the curse. At the end of the movie, we’re shown a shot of the pool with one plastic wall pulled down, the pool empty. There’s no going back.

The other pool us a huge indoor one in some kind of abandoned school, or some such building in Detroit, where are heroes go with a strange sort of plan to kill the monster. Jay floats in the pool, waiting for the thing to come. The pool is supposed to protect her, in a sense. It doesn’t. 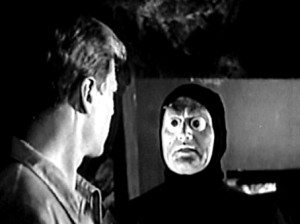 If only they were this easy to spot

Death is everywhere in It Follows. The kids watch a movie on TV early on. It’s the ‘50s science fiction flick Killers From Space. Yara, friend of Jay and Paul and Kelly, is seen reading an odd little handheld device throughout the movie. She’s reading The Idiot by Dostoevsky, and quotes from it here and there, reminding us that death is inevitable. In a scene at school, Jay’s teacher quotes T.S. Eliot: “I should have been a pair of ragged claws…”

Paul, Jay’s meek childhood friend, wants to sleep with her. In the context of the movie, he’s such a nice, meek guy, and so desperate for Jay, that he’s willing to risk the monster coming for him just to get in her pants. Which seems a little ridiculous. “You want to die that bad, kid?” one finds oneself asking. But in the metaphorical context, it makes perfect sense. He understands that growing up marks a scary change, but he wants it anyway. He’s done being a kid. If Jay can suffer adulthood, so too can he. 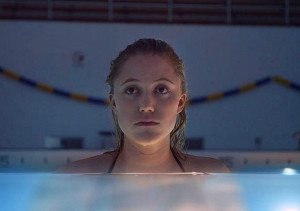 The pool won’t save you now

As a horror movie, It Follows is strange and ominous, but perhaps not entirely successful. It’s oblique enough that without thinking at least a little bit on its metaphorical underpinnings, it might come off as underwhelming. (If all you see is some kind of “sex will kill you!” message, you’ll likely not come away too impressed.) This in contrast to last year’s freaky horror movie, The Babadook, which works beautifully both as a monster movie and as a profoundly disturbing metaphor for parenthood and insanity.

It Follows works best as the scariest indie coming of age movie ever made. Its abstract ending sums it up. There is no expected resolution of any kind. It ends as it must. Walking hand in hand, death forever on the horizon.

2 responses on “It Follows: The End Is The Beginning”