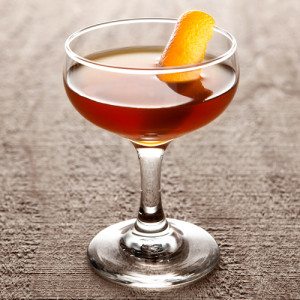 A blood and sand is an unusual cocktail in that its primary ingredient is scotch, and as anyone who appreciates a fine scotch will tell you, only an asshole wastes scotch in a cocktail. Nevertheless, assuming you’ve bought a less than stellar bottle of scotch, which if you’re me you have, adding in vermouth, cherry heering, and the juice of a blood orange makes it go down real nice.

I bring it up because if, also like me, you’ve just sat through Kill Me Three Times, and may god have mercy on your soul if you have, you’re going to need a drink. To start. I’m guessing after three of these I’ll pass out and wake up in the morning having forgotten I ever saw it. I could wish for nothing better. 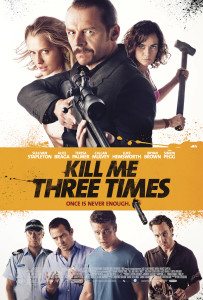 Kill Me Three Times is a wacky hitman movie directed by Aussie Kriv Stenders and written by James McFarland in a desperate bid to create a new Reservoir Dogs. Or at least a Lock, Stock And Two Smoking Barrels. Or any other movie about a bunch of poor bastards killing each other you’ve seen and liked far more than you’ll like this, if you were to see it, which I can’t recommend strongly enough you don’t. (If you’re in the mood, it releases today on VOD, and in a week or two in your local theater.)

It’s really quite baffling. It starts off with Simon Pegg as hitman Charlie Wolfe lying on his back, presumably shot or something similar, saying, “Fuck me!” before narrating the wacky story of how he ended up on the wrong side of an ass-kicking.

So you’d think Charlie would be the focal character, the too-clever hitman screwed over by a bunch of idiots too dumb to do what’s expected of them. But first off, he’s not very clever. A problem because he’s played as being clever. The filmmakers and Pegg think he’s clever. He’s not. He proves to be something of a bonehead. Only it’s played as though he’s smart and bad luck has screwed him. This is confusing and unfortunate.

However, Charlie isn’t the focal character. As it turns out, Alice (Alice Braga) and Dylan (Luke Hemsworth, brother of Thor) are the main characters. I mean not to give anything away here, but apparently I was supposed to give a fuck about them, or so I learned at movie’s end. I gave not a single fuck about either of them. Happy endings about characters I don’t give a fuck about are not, in fact, happy. They are really quite sad. Drives a guy to drink. Speaking of which, blood and sand number two coming up. A moment. 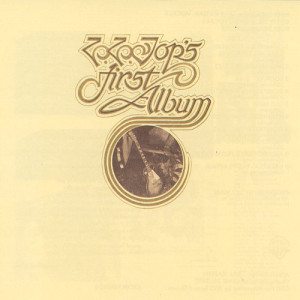 Yes. You need this one.

You see, it’s a sweet drink, yes, but the scotch cuts the sweet like a knife. It doesn’t linger. It starts sweet, but by the time it’s made it to the back of your tongue the scotch takes over, and if ZZ Top’s First Album is on while you’re drinking it and writing about this movie you hope to have forgotten by morning, you’re going to be fine. I promise.

Where were we? Oh yeah.

Note to filmmakers making a neo-noir in which everyone is trying to fuck over everyone else: everyone needs to be fucked over in the end. See: Blood Simple, for one example among EVERY OTHER MOVIE LIKE THIS ONE, EVER. Not to say filmmakers shouldn’t bust open genres and do something surprising. They should. But genres are genres for a reason. You have to understand the rules to break them.

I’m guessing you recall a little movie called Pulp Fiction. In it, Tarantino flipped sequential story-telling on its head, and he did it for a reason: to mess with expectations. Watch Pulp Fiction for the first time and you’ll have not a clue what’s going to happen next. Tarantino understood the rules. He broke them to unbalance the audience. He abandoned well-worn crime movie structure and left his audience dangling. 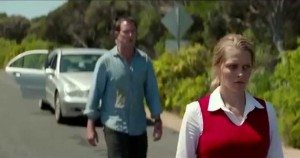 Kill Me Three Times is called Kill Me Three Times because fuck if I know. No one is killed three times, but giant titles appear three times during the movie. KILL ME ONE TIME, says the first one, and so on. The gag is that there’s this one section played out of sequence, right at the start, where Charlie the hitman follows this dumb couple, Lucy (Teresa Palmer) and Nathan (Sullivan Stapleworth), as they try to kill Alice, and seemingly succeed. We get the idea that Charlie was supposed to kill this very same woman as he spies on the goings-on unseen. But we don’t care. Why would we? We have no idea who any of these people are.

Alice’s car goes up in flames, and we cut back in time—KILL ME TWO TIMES—to the set-up of what we just saw. Why do this? I have no idea. Played out in real time, we might actually begin to give a fuck about someone in the movie. Nothing else is told out of sequence. Just the one part. So the movie has no balance structurally. It feels lopsided. 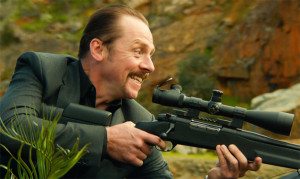 Happy to be a killer

And who’s killed three times, anyway? Alice? Is that the joke? That three times she’s almost but not quite killed? It can’t be. Part two is just part one played out in real time. Sort of. Except for the killing part. Or I guess in the second iteration we see she didn’t die? So even though it’s the same exploding car, just seen from two perspectives, that counts as two separate attempts on her life? And what about the third? She doesn’t figure into the third. It’s been like an hour since I watched this movie and I can’t remember who the third section was about.

Blood and sand number three, I think, is where things really come together. The ZZ Top is kicking in, and of course this is the recent mastering of the original album, the ‘80s versions are shocking in how awful they are, if you’re listening to any ‘70s ZZ Top albums mastered in the ‘80s you might as well be pounding your head into the wall, and the bad movie you just watched is fading, fading, such that only the garish colors and horrifying music remain clear. 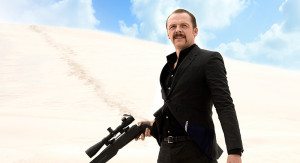 Holy hell. The music. I swear they got some band to re-record the soundtrack to Blame It On Rio for this thing. It is, in a word, unconscionable, this score. It matches the visuals, all midday sun and bright colors. The movie is set in some kind of Australian beach resort town or something. Maybe five minutes takes place at night. It’s going for the kind of colorful ‘80s neo-noir of Something Wild and Miami Blues, visually.

Getting back to the story, Alice, who spends the bulk of the movie slowly climbing up a hillside, has this rotten husband, Jack (Callan Mulvey), who owns a bar and has a gun and some money in a safe, pretty much just like Blood Simple, only Jack’s no more interesting than anyone else, and mostly you just wonder who it is that’s going to kill him and when and why not sooner? Jack hires Charlie, which is why… which is why… Sorry, I can’t recall where this paragraph was headed.

I will say this: I like Simon Pegg and I like him as a hitman and it’s too bad he didn’t have a better script to work with here. If he were allowed to be a badass instead of a jerk, if his character was the hub around which the movie spun, Kill Me Three Times might have been salvaged. Instead of being, on the whole, like watching snails mating. And then exploding.

As a side note, have we really reached the point in filmmaking where we can’t set a car on fire or put a squib on a man’s neck and have a little blood squirt when he’s shot? Cars aflame with CGI fire look terrible. Gunshot wounds to the neck look even worse. Surely a budget allows for a little fake blood? A little fake blood. It’s all I ask of any movie.

And on that note, I leave you with Sifl & Olly. You’re welcome.