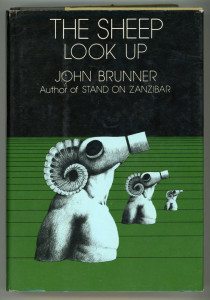 The modern ecological movement really took off once the hippies got involved. Rachel Carson’s famous book, Silent Spring, about the dangers of chemicals, got the ball rolling in ’62, but the world took a few years to catch up and become suitably outraged. In ’68 came two other notable books, both about human overpopulation. One was the non-fiction The Population Bomb, by Paul R. Ehrlich, the other was John Brunner’s science fiction novel Stand On Zanzibar. Neither took kindly to humans. A few years later Brunner would publish The Sheep Look Up, presenting a different sci-fi future, one destroyed by pollution run rampant (this one I’ve read; good stuff! If you like grim dystopian futures in which humanity is destroyed by its hubris, that is).

The first Earth Day took place in ’70, and Greenpeace was born in ’71. The time for Earth’s revenge had come. Hollywood took notice. 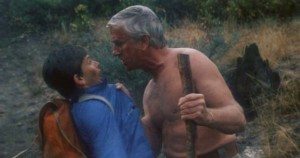 And DON’T call me Shirley!

Silent Running (’72) was set in a future where life on Earth was all but extinguished, the last plants and animals kept alive on spaceships. Soylent Green (’73) presented a future destroyed by pollution, overpopulation, and not enough food. The Food of The Gods (’76) begins with a strange substance bubbling up from underground, as if offered by an angry Earth, which when fed to farm animals turns them into giants. Empire of The Ants (’77) shows what happens when humans despoil nature with toxic waste: giant, superintelligent ants take over. Day of The Animals (’77), with the help of Leslie Nielson, is about animals gone mad thanks to humankind’s destruction of the ozone layer. When rabbits are injected with hormones to sterilize them in Night of The Lepus (’72), they grow into carnivorous giants. And of course movies like Jaws (’75), The Swarm (’78), Piranha (’78), and Kingdom of The Spiders (’77) did away with explanations, and simply featured various creatures ganging up on us.

In short, the ‘70s were not a good decade to be human. 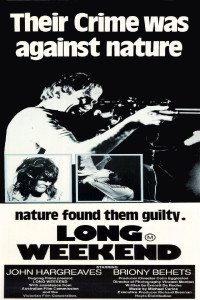 A nature’s revenge movie with a bit more subtlety and style than usually seen in the genre is Long Weekend (’78), a low budget Australian flick little noticed or respected upon its release, but which has steadily grown in respect since.

Written by Everett De Roche in a matter of weeks and directed by Richard Franklin (the two of whom would later make another low budget, highly repsected Aussie B-movie, Road Games (’81), starring Stacey Keach and Jamie Lee Curtis (which I only saw recently, and is worth checking out for its offbeat weirdness)), Long Weekend is short on character development and story, but makes up for it with atmosphere and a touch of the surreal.

Nothing much happens in Long Weekend. We meet a bickering couple, Peter (John Hargreaves) and Marcia (Briony Behets), as they pack up for a weekend in nature. Along the way, they toss cigarette butts out the window and run over a kangaroo. They arrive late at night, and fail to find the spot by the beach they’d been after. They twice pass a tree with an arrow carved into it—or was it two different trees? Have they driven in a circle?

No matter. They sleep in their car and wake up to find themselves but a hundred yards from their intended destination. Hurray! Everything’s going to work out fine. Only look—ants! Yuck. Better fetch the can of insecticide, Marcia, and spray it EVERYWHERE. So much icky nature in nature. And this eagle egg? Smash it! Ha! Take that, you dumb eagle egg! [Cue angry eagle observing from on high.] 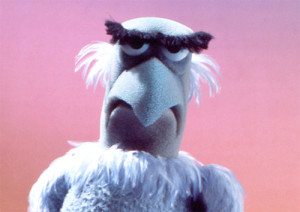 Swimming in the ocean, Peter spots a scary black shape nearing him. Marcia sees it from the beach. Shark? It must be. What else swims in the ocean?

Peter gets out of the water and fetches his rifle and shoots about twenty rounds into the water. Blood bubbles. Got him!

Later on, a bullet-ridden dugong corpse washes up on the beach. Guess those weird nighttime moans weren’t evil spirits but the cries of the friendly sea cow’s babies. Awwww! Sea cow babies? How cute is that? As cute as the baby ducklings swimming away from their mother, shot to death by Peter? 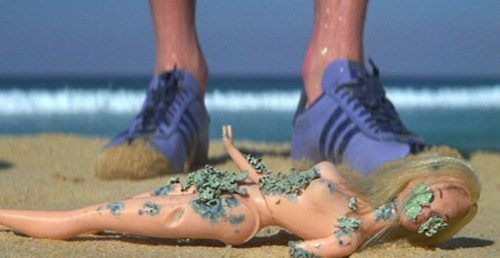 Impressive in Long Weekend is how vague the animal threats are. An eagles flies in Peter’s face, a possum bites him, spider webs freak out Marcia, and…well, not much else. It’s more that the natural world is closing in. It’s threatening in a kind of omnipresent but nonspecific way.

The one thing decidely off: the dugong, every time they notice it, has moved closer and closer to them. As if it’s been crawling up the beach. Which is odd, it being dead and riddled with bullets.

Sufficiently creeped out, they finally pack up and get the hell out of there. Or try to. Nature’s threatening vibe turns them against each other. Unpleasantness ensues. Nature gets her way, without ever having to do much but exist.

Long Weekend is all about tension. Waiting for what’s coming to come. No characters are developed. No explanations are provided. Nature gets her revenge, plain and simple. And it’s enough. It’s a weird, freaky movie.

Frogs (’72) tries for something similar, and comes up with much less. It is, to be blunt, a turd of a movie. But kind of fascinating all the same.

It’s set on an island somewhere in the American South—maybe Florida? Louisiana?—at the mansion of old man Jason Crockett (Ray Milland, cashing a check), where his family has gathered to celebrate his birthday, or maybe the 4th of July? Or maybe it’s the same day? Whatever. 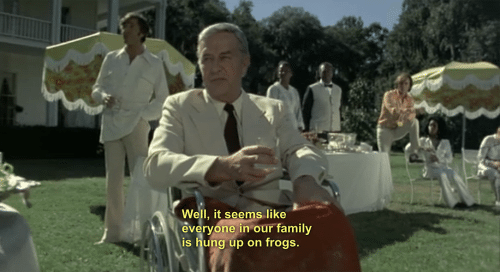 Why yes. Yes it does.

Nature photographer Pickett Smith (Sam Elliott) turns up and is invited to stay for lunch. The family consists of the typical young, rich, pretty jerks. The set-up reminded me of the “Father’s Day” segment from Creepshow, which has the good sense to last no more than fifteen minutes. Frogs goes on for an implausible hour and a half.

Right off the bat, everyone’s worried about the unusual number frogs hopping around and croaking all night long. Tension in the movie is created by the clever technique of, every minute or two, cutting to close-ups of frogs. I’m not exaggerating. At least once every two minutes, cut to a frog. THE FROGS ARE COMING, PEOPLE. 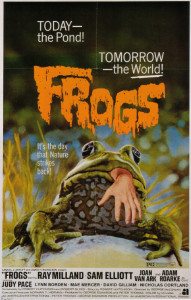 I mean just look at the poster. That’s a human hand in its mouth. The frog ate a human! I can’t wait for that scene, thought anyone foolish enough to see this in a theater. No such scene exists (hey, Speilberg, how about a remake?).

In fact the frogs never kill anyone, let alone gobble them up. The creepiest death comes by tarantulas. Another character is offed in a greenhouse when sneaky lizards tip over jars of poison. But my favorite death has to be the one where the nice lady runs into the shallow water at the edge of the property, gets a foot stuck in the mud, and stands there screaming as a very, very slow tortoise inches toward her.

Snakes get their shot, insects are intermittently annoying, and one poor bastard gets taken down by gators in the oil-choked pond. But the frogs? They hop around in alarming numbers, and that’s about it. Wheelchair-bound Ray Milland is definitely terrorized by the frogs at the end. He screams and falls over, anyway. And a few frogs hop over his body. But do they gnaw off his face or something? I wish. 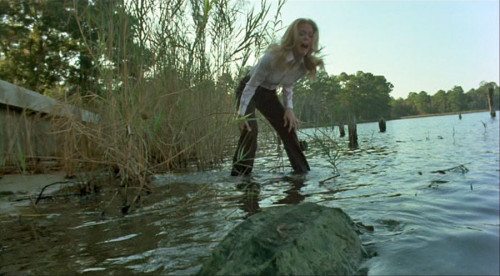 It’s coming! To get me! There it is! It’s still coming! It will be here pretty soon I think! Help!

Frogs acheives a certain amount of atmosphere with its swampy setting. Everything’s green and decaying and the sunlight through the trees and mist is diffuse and ghostly. It achieves little else.

For a trashy horror movie, Frogs is mysteriously lacking anything sexual, unless you count the two scenes where Sam Elliott takes off his shirt. No sex, no gratuitous nudity, barely a drop of blood. What were the producers thinking? How do you make a movie called Frogs and not include a shower scene? Naked women and frogs are a natural fit. Very biblical. Didn’t Eden have a frog problem? I’m pretty sure I read that somewhere. 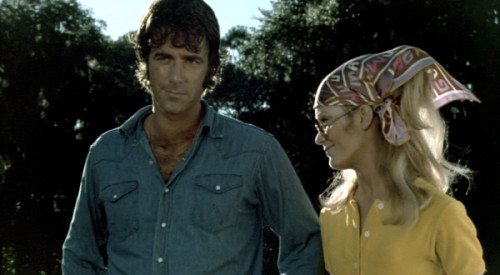 Nature’s revenge movies of the ’70s never really hit the big time, aside from Jaws. Too bad. I think it’s time for a resurgence. In the meantime, if you’re looking for something spooky, Long Weekend is a sleeper worth your time. As for Frogs, the poster is the best thing about it. 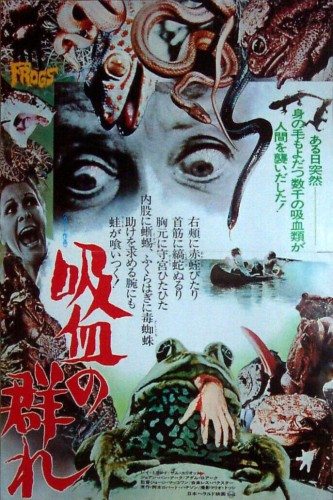 2 responses on “Long Weekend, Frogs, and Other Vengeful Tales of Nature”