There is no question that Carol Reed’s 1947 Northern Irish noir Odd Man Out is an intriguing film — one Roman Polanski has repeatedly called his all-time favorite. Tense, brilliantly shot, and abrasive, the film strands you in the night streets of a city that might as well be Belfast. There, you are hard pressed, hunted, and wounded. You are also eventually and unfortunately beset by a series of moralizing boors who can’t shut the hell up. 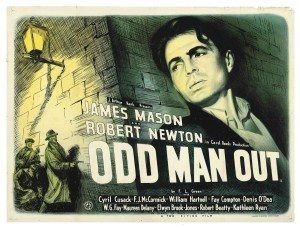 So it’s two-thirds of a great film and one-third bitter aftertaste. Not exactly my cocktail of choice.

Carol Reed is better known for directing The Third Man — a film more frequently cited as a favorite of cinephiles (and one getting a 4K re-release this summer). Here, Reed pairs for the first time with his Third Man cinematographer Robert Krasker to direct the distinctive James Mason. Mason plays Johnny McQueen, the leader of an IRA-type group about to stage a heist. The robbery goes down smoothly but McQueen falls out of step during the getaway. He kills a man, takes a bullet, and ends up abandoned in the road.

In that way, Odd Man Out is similar to the recent film ‘71, which you ought to seek out. Mason’s McQueen has a simply described task that’s nearly impossible to achieve: he must cross the city as a most wanted man and, if at all possible, survive. 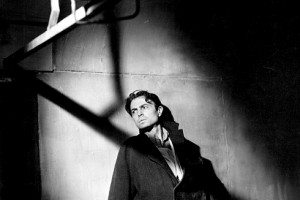 Krasker’s cinematography and Reed’s directing style here work to great effect. The harsh black & white is painted with lines of light like migraine daggers and shadows dark enough to lose your wits in. Mason scrambles from danger to danger as his compatriots and his young love battle resonating waves of calamity. These early scenes fill you with excitement, a taste of iron in your mouth and an icy hand on the small of your back.

Then, when the script reaches the stage most dire, it dumps you with a passel of sloppy drunks and promises to be back soon.

The blame must fall either to novelist F.L. Green, on whose work the film is based, or with screenwriter R.C. Sherriff. One or both take a tight, panicked noir cocktail and drown it in the cinematic equivalent of huckleberry wine. Mason is left to find a quiet corner as characters no one in their right mind could care about drone endlessly, personifying ideas in scenes that belong in a mortuary furnace. All the tension drains from Odd Man Out as nudniks debate whether McQueen is worth saving for his soul, his heart, his body, his worth, or his political significance. 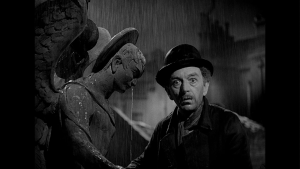 Here. Here’s where you should start fast forwarding.

It is as if the roller coaster you’ve taken a seat on pulls off to a siding so you can listen to theme park employees ponder their health insurance options for half an hour. And then Reed remembers that he’s making a noir and ties things up appropriately, and even strongly, but it’s too late. It’s equally as too late for you to love Odd Man Out as it is for Johnny McQueen to live his dreams.

There are delightfully grim scenes in the film. It looks nearly as good as The Third Man, making North Ireland’s alleyways as maddening as Vienna’s sewers. The supporting cast gets some juicy meat to feed on and many of them make of it a substantial meal — including Dan O’Herlihy and others. Mason, as the lead, is only hindered by the film’s refusal to stick with him. In the wobbly third act, his character goes as awry as the movie, but the actor muddles through more or less. 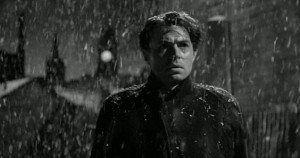 Odd Man Out is odd. I think upon consideration that I do recommend you watch it; only when the character of Shell (F.J. McCormick) finds McQueen, you should also find your fast forward button. From this point on, there’s a lot of wrong-footed nonsense until Shell actually gets McQueen on his feet and walking towards Father Tom’s. Sure, you’ll miss a good scene or two in the bar and another with Kathleen (Kathleen Ryan) and Grannie (Kitty Kirwan), but you’ll also not be tempted to throw your glass at the television. That half an hour will also spare you all of Robert Newton’s preposterous portrayal of the insane artist Lukey, a character slightly less irritating than Jar Jar Binks.

It’s a pity, really. If I were an editor, I’d be tempted to put together an alternate cut of Odd Man Out. It would strip the film of its grand message, but it’s a noir. Its message should be clear from the get go: there’s no hope for you.

4 responses on “Odd Man Out Lives Up to Its Name”