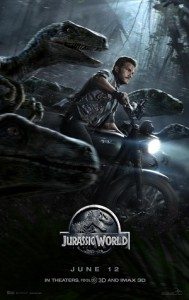 Jurassic World is a dreary, depressing, corporate money-sucking machine so absent of wonder it’s enough to make the child in you beg for a quick death. Its director and one of its many, many writers, Colin Trevorrow, claims that the big hybrid dinosaur at its center, the Indominus rex, represents corporate excess, and the demand that everything be bigger and louder and dumber.

Which is hilarious. What else is Jurassic World but a prime example of bigger, louder and dumber? It’s a movie that complains how we’ve all lost any sense of wonder, then proceeds to bludgeon us for two hours with with its wonder-free corporate dinoscape.

I watched Spielberg’s original Jurassic Park last week for the first time in years, just to remind myself what it was like. It’s not bad. It’s a fun cartoon for kids. I watched it with soon-to-be-Mrs. The Supreme Being, who was 10 when it opened, the ideal age to have seen it. She still loves it, probably just as much as I love Raiders of The Lost Ark. The dinos, many of which are practical creatures designed by Stan Winston, still look pretty good, though the CGI is in places dated. Spielberg knows how to direct these kinds of movies, and Michael Crichton’s story is just-not-dumb-enough to work. 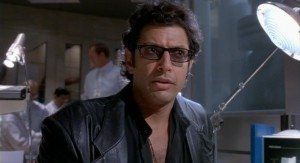 The best thing Crichton brought to the story was its theme, which isn’t “man should not play god,” it’s that no matter how perfect a system we as humans create, it cannot be flawless. Errors will necessarily creep in. Jeff Goldblum’s character exists to give voice to this. His point about chaos theory being that no matter the precautions taken, things will go wrong. In a regular theme park, not so big a worry. Rides break down. Employees are lazy. Maybe once in a decade some poor bastard tourist dies. But in a theme park where prehistoric lifeforms have been capriciously brought back to life? The potential for disaster is not only huge, but, more to the point, totally unpredictable. One tiny error could blossom into something huge, like the butterfly flapping its wings causing a hurricane half a world away. As Goldblum explains.

So anyway, in Jurassic World there is no theme, aside from the self-negating one about how people need bigger, louder, dumber shit to be amused—i.e. movies like Jurassic World. Other than that, what’s left? I guess something like, “Don’t make a giant, murderous super-dinosaur, because maybe it’ll do bad things”? 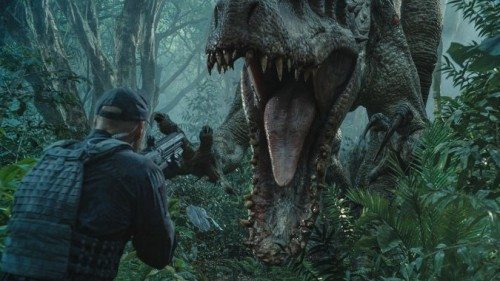 Why does the Indominus escape and wreak havoc? It’s been living in peace for quite a while by the time the movie starts. There is no inciting incident of any kind. I guess it just came time for it to run rampant?

What I don’t understand is why nobody writing this thing looked to the first movie’s theme as inspiration. In Jurassic Park the dinos don’t suddenly break free and kill everyone. The park really is well designed, but only insomuch as any human system is. It can’t account for the actions of a surly employee who feels mistreated. 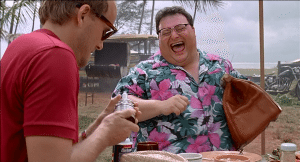 Nedry (Wayne Knight) concocts a plan to steal dino embyros, but he enacts it the same night a massive storm hits. Slowly but surely, events conspire to create disaster. Nedry is the butterfly. Or maybe the park’s creator, Hammond (Richard Attenborough) is, by not paying Nedry enough to keep him happy. In any case, it’s humans being humans that cause the problem. The best laid plans, etc.

Jurassic World needs a Nedry. Not even that. It could be anyone, not even someone up to no good. An innocent human committing an innocent error, one that sets events in motion, one that sets the butterfly’s wings flapping.

Instead there’s nothing. Just a giant dino that escapes because the screenplay says it’s time to escape. It has no goal, no purpose. It runs around killing stuff because that’s what it does. It might as well be a hurricane for all the personality it has.

None of the human characters has any more personality than Indominus. What genius decided to have the kids in the movie both be boys? What century is this? They can’t have even one be a girl? How about both being girls? Crazy, I know. The only female character is Claire (Bryce Dallas Howard). She begins the movie as the most irritating human on earth, an emotionless monster who hates children and animals and is only concerned with the park’s bottom line.

But don’t worry. At some point mid-way through the movie, her motherly instincts take over and she shoots some bad pterodactyls. She’s cool now! Hurray! 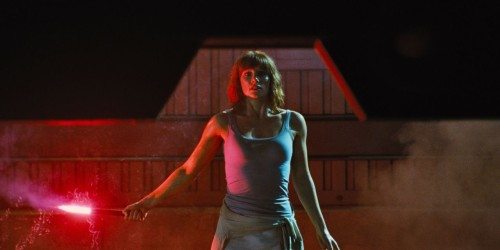 Won’t someone please eat this woman?

Her foil is Owen (Chris Pratt), who has a special bond with some raptors. His character is strong and smart and good and never changes once. Everything he says is true, everything he does is right. He makes not a single mistake or misstep.

As for the two boys, lost in the park, running from dinosaurs, all I could think about was which one I wanted to see eaten first. Spoiler: they both live.

Speaking of which, Jurassic World is wall to wall death. I’m generally not so concerned when people die in monster movies; when they don’t it feels fake. But the deaths in Jurassic World feel callous. It’s just kind of ugly, the way people are picked off over and over again. They’re treated like blips on a screen.

The story? For the most part it’s just a big mean dino running around killing everyone. As a bonus, we get evil Vincent D’Onofrio as Hoskins, some kind of army guy? Or something? He’s never defined outside of his obviously evil nature. You see, he has this plan to use raptors in the army to replace soldiers. Right? Great idea. And highly plausible. When Indominus goes wild, he’s thrilled. Now he can unleash Own’s trained raptors to kill it.

Yet by the end I think it’s revealed that Hoskins had somehow struck a secret deal with the head of the genetics lab, Dr. Wu (B.D. Wong), to include raptor genes in the hybrid Indominus’s genetic makeup, so it could eventually be used as a military weapon? Does that actually happen? Because it’s so stupid I’m having trouble believing it. I mean if Hoskins wants Indominus for a weapon, why is he so keen on the little raptors killing it? It doesn’t matter. This all happens at the end in a blur. It’s so tangential to the story it’s not even a spoiler.

This movie can’t be spoiled. You know exactly what happens. Dino runs amok. People die. In the end its defeated and the people we’ve come to know and hate survive. 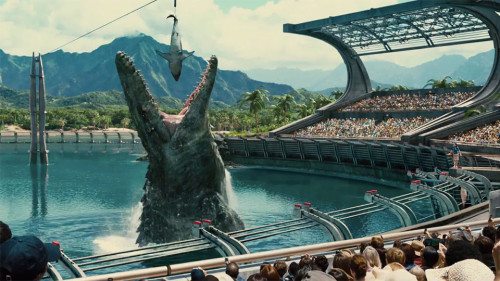 Ha ha. Get it? It’s eating a shark? Like that’s Jaws? And this movie is so much bigger and better and Jaws is small and dumb? Funny stuff.

Spielberg was smart enough to understand that just putting effects on-screen isn’t enough. You have to imbue them with meaning. The characters in Jurassic Park, simple as they are, are allowed to be amazed by the dinos. And we are amazed with them. In Jurassic World no one gives a shit about them.

There are maybe two shots in the movie, lasting maybe 15 seconds combined, where tourists cruise past non-lethal dinos in their natural habitat that are kind of beautiful and wond—Cut to Indominus killing and eating! Quick! No time for wonder! Death is all around! 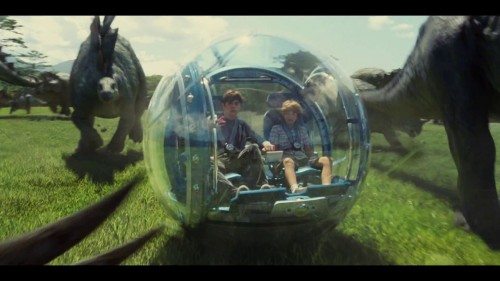 Anywhere you want to go, fellas…

Every second of this movie is dumb. You could spend all day picking it apart. Not a single scene exists for any other reason than to get us to the next dino-rampaging set-piece. At one point the two kids go on a “ride,” where they get to cruise around the park in these plastic roller-ball things. Only there’s no track. They actually get to drive it around wherever they want to go. And when danger arises and they’re signaled to return, they ignore it, and keep on cruising.

I mean, seriously? I know it’s a dumb action movie, but come on. Patrons can just drive around forever, anywhere? With no way to make them return? Must be rough running that attraction. “Sorry y’all, guess them folks in the roller balls are still looking at dinosaurs. Wish I could get them to turn around. Maybe come back tomorrow and get in line early? Dunno.” 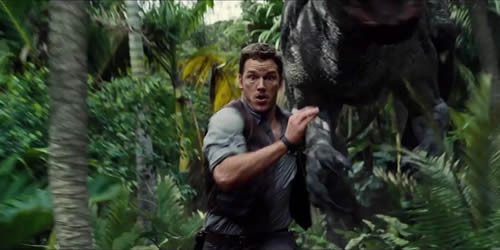 The dino whisperer on the run

It’s so obvious this script was written by committee. At one point he two boys have a little cry about how their parents are getting divorced. Huh? Their parents are barely in the movie. They’re not on the island. And that’s the lone mention of divorce.

On and on it goes. Visually the effects are all state of the art. Too bad they’re in such a depressing movie. The sequence where pterodactyls fly around eating people is a nice one. As for Indominus himself, he’s rendered with zero imagination. He’s, like, a big grey lizard. No character whatsoever. The best CGI has to offer, and still all we get is another lizard. In the end he fights, um, another dino, I won’t tell you which one, you’ll never guess, and that dino gets a last moment in the spotlight—the camera flies at him, spins around him, he roars on a mountain platform overlooking the ruined park…and it’s visually flat and uninspired.

The best shot in Jurassic Park is deservedly iconic: The T-rex roaring in the visitor center while the banner flutters down in front of him. Spielberg understood the wonder of dinosaurs back then. Director Colin Treverrow does not. His direction is what one generally calls “serviceable.” He is merely a cog in a vast money-making machine.

And make no mistake, Jurassic World will make all of the money. It’s on track to rake in almost $200 million its opening weekend. People seem to enjoy it. The Friday night Imax audience I saw it with applauded when it was over. Which I appreciate. The noise of it woke me up. 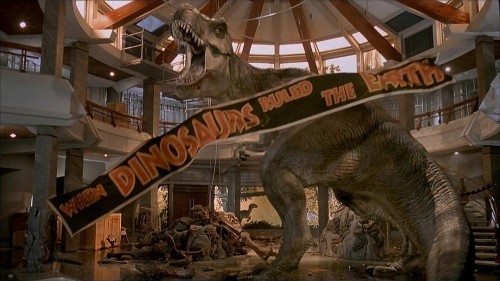 When dinosaurs ruled the Earth, in the distant past of 1993