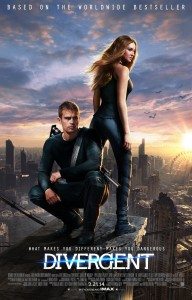 I realize that this may come as something of a tragic surprise to you, but the major motion picture adaptation of the dystopic YA novel Divergent is about as good as having your genitals bedazzled with fire ants. One would be hard pressed to even summarize the preposterous inanity that packs the film—from beginning to end—like the cheeks of a hamster with a thumb tack fetish.

After the big war, see, Chicago survived by building a giant wall around it, failing to repair any of its buildings, spending a lot of money on matching outfits, and splitting the population into rigidly policed units based on their sole—and I mean sole—character trait. Of which there are five. Traits, not characters, but since each character-trait-group is homogenous, sure, there might as well be five characters.

Except oh noes! Tris, the horribly and depressingly miscast Shailene Woodley is ‘divergent.’ This means that she is smart, and giving, and brave, and uh… dopey and sneezy? Wait. I’ll remember. Right: honest and peaceful. Or, more accurately, frank and boring. 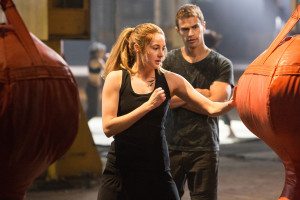 Never has a punching bag felt so at peace.

If any of that makes sense to you, I’m genuinely sorry. It is potentially the stupidest politico-social system since that time I introduced my crayfish to the cat. All the chilluns in once-Chicago pick their future clan association out of the sorting hat from Harry Potter, which has somehow been converted into a mind-sharing injectable narcotic. This was obviously something they worked up with all the time they had since neglecting to work up the internet or television or common sense.

Once you’ve been told what clan you’re meant for, that’s it, unless you decide otherwise, in which case no big deal. Tris, though, she’s divergent and that means she can’t just pretend to be an extra in the video to Beat It and run around and jump on and off trains while hollering in her black pants because she is a threat to their very (stupid) way of life.

What’s that old saying about building a house out of stupid cards? 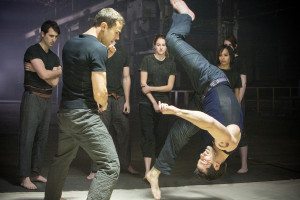 Hi-yaa! I am dauntless! I wear black and holler and live in a Chicago crevasse.

And on it goes. Shailene Woodley, who isn’t not talented, is the least convincing action heroine since Clare Danes failed to save Earth from Skynet in T3: Rise of the Machines. If you’ve seen that movie, then you know exactly how harsh I’m being.

There is some cataclysmically bone-headed plot that drives the second half of the film, in which Kate Winslet’s character, the ‘erudite’ leader, mind-controls all the ‘dauntless’ black be-pantsed hollerers to massacre the ‘abnegation’ milquetoasts so the smarties can take over the husk of what was once a good place to see a blues concert.

Now, in this film, Chicago is a good place to take the least-safe amusement park rides of all time and to fall into the stony crevasse which is, uh, under some warehouses? in Chicago? And that’s where the dauntless people go to chill out because, um. Yeah.

Oh wait! Here’s a really shitty pop tune to make you forget why you ever wanted to be alive in the first place.

Don’t worry. I’m sure everything will be explained in parts two and three point 1, 2, and 3 and the television show. This film also stars Miles Teller whose entire role is to act like a shithead with no filter, Zoë Kravitz, Theo James, and Jai Courtney as Jerky McJerrkihan (making his second appearance in a ‘what not to watch post’, if you’re sensing a theme).