The Maze Runner is a movie that I have watched. What is it about? Well, imagine Lord of the Flies crossed with Labyrinth and you get the idea. Or maybe you get a better idea? I wouldn’t be surprised.

The film is, on the whole, surprisingly not excruciatingly terrible. It is only aggressively not very good at all.

It is also amazing in these five ways I struggled mightily to think up.

1. Even though this is a film about kids who are trapped in the center of a deadly maze, there are no notable scenes of those kids lost in the maze, or exploring the maze, or puzzling about the maze. Turns out, they’ve got a map of the whole thing the entire time. Amazing! Or amazing? Wait. I know: Amazing‽

3. Despite having to spend most of the film running away from giant mechanical spider things, some of the actors in this film churn out some decent performances, and most actually look like teenagers — particularly Blake Cooper playing the chubby dweeby kid, who dies in a scene that will surprise you if you have never seen any sort of filmed entertainment before. 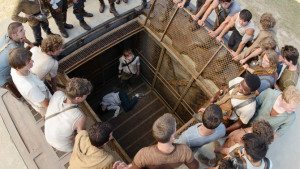 Aw man! It’s only a girl. And she’s holding a note saying “This is the last one, ever.” Let’s go throw rocks at a tree or something.

Not a single maze runner asks her to the maze prom.

5. Try as I might I cannot think of a fifth amazing thing about The Maze Runner. I suppose that’s sort of amazing? Or, at least it’s as amazing as The Maze Runner?

I cannot wait for the sequel so I can swear I’ll never watch it only to watch it as soon as it arrives on whatever streaming media service it comes to first. The trailer just came out. It looks like soiled pants.

My favorite part about this trailer is when, at the beginning, they declare The Maze Runner a complete success.