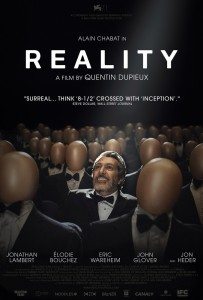 I’m not sure if Quentin Dupieux growing less weird is a good thing, because Reality, his newest movie, is less weird than Wrong, and it’s less good too, although I can’t be certain of either of those pronouncements. On the other hand, it’s weirder than Wrong Cops, and much better, though I like the final scene of Wrong Cops more than any scene in Reality.

Dupieux isn’t merely weird for weird’s sake. He’s not just going for laughs. But I’m not sure what it is he is going for. I mean in general one could say he’s busily mocking the film industry and its demands on what films should contain and do and be, but this feels like a cop-out. Unless Depieux really is just goofing off.

I tried and failed to watch Rubber when it came out. It didn’t work for me. Wrong I kind of mostly sort of think I might have liked. It’s like a box full of spring-loaded monkeys. Open it and a bunch of monkeys bounce up and down and punch you in the face. Some of them are funny. Some of them hurt. It’s hard to tell which is which. Wrong is about a man who’s lost his dog, and whose tree is not the tree it used to be. We want to see the man reunited with his dog. This is a good hook on which to hang your hat. 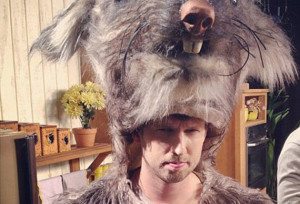 Reality lacks such a hook. It is the story of a man, Jason Tantra (Alain Chabat), camera operator for a public access cooking show hosted by a man wearing a rat costume who can’t stop scratching at his imaginary eczema, and his attempt to get funding for his movie idea. Called Waves, it’s about televisions using microwaves to cause all humans to bleed out of every orifice until they die.

The producer he pitches it to loves the idea, but wants to know what sounds people will make while they’re being microwaved. Tantra says they will groan. Yes, but what will the groan sound like? The producer wants a groan that will win him an Oscar. 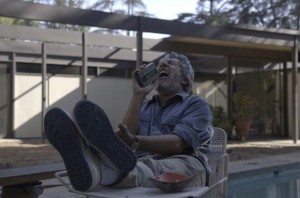 Trantra is given 48 hours to find the perfect groan. This isn’t exactly funny, and it isn’t exactly weird, either. I don’t know what it is. A commentary on ridiculous movie producer demands? Sure. But if that’s all it is, it’s kind of limp. Which is why I’m trying to give Dupieux the benefit of the doubt here.

In a separate story thread, a hunter shoots a boar in the woods, and while gutting it in front of his young daughter, she sees a blue VHS tape in its entrails. Now we have a mystery. What’s on the tape? And why is it inside a wild boar? 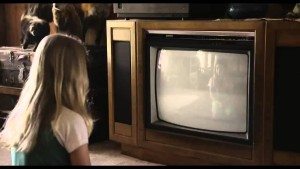 About to watch the mystery tape

This thread might be a dream. Also, it might be a movie the producer is watching the dailies of. Then again, Tantra might also be in a movie, or a dream. By the end of the movie, everything and everyone is pretty well mixed up together in a way I found less than satisfying.

And yet Reality is still oddly compelling. I wanted to see what happened next, even when whatever happened wasn’t quite as interesting as I wished it were.

Jon Heder plays Denis, host of the cooking show. He sees a doctor who tells him the eczema is inside his head. Is the movie the audience’s eczema? Are we scratching it for meaning when the only meaning is what we find inside our own minds?