I’m no accountant, but I’m pretty sure The Hobbit: The Battle of the Five Armies represents the highest investment to boredom ratio in the history of man, easily topping the other two Hobbit movies and most of the Creosotic Era. 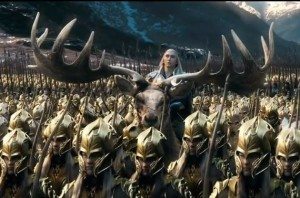 I think one of the five armies was War Moose?

It starts right away with some aggressive boring and perplexing meaninglessness and then just goes from there. At no time could one be reasonably expected to give a good goddamn about anything that’s happening. Half the time I didn’t know who any of the characters were or even what species they were — elf, scrunt, dweezil, or whatever. The other half the time I was hoping they would die quicker and make less of a fuss about it.

This movie was so boring I forgot there was a dragon in it. A giant, fire-breathing, sky-lizard voiced by Benedict Cumberbatch, whom I forgot all about. My favorite part was when Evangeline Lilly‘s elf princess gets it on with Aiden Turner’s dwarf corpse. That was when The Hobbit: The Battle of the Five Thousand Armies went from being boring to being sublimely boring. Also, that’s when I was eating cake.

Then there was approximately another hour of Hobbity faffing about before a final hour of credits.

This movie makes me embarrassed to like The Lord of the Rings movies as much as I do. Let’s just pretend it doesn’t exist and never speak of it again.

3 responses on “The Hobbit: The Battle of the Five Armies”