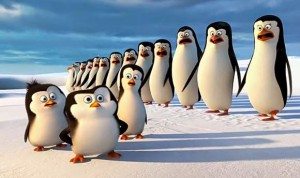 I am cute and deadly.

You what everyone likes?

That’s right: penglings! Or pengwings? And then, also, some folks dig penguins. Particularly the four loveable lugs what have pepped up the series of Madagascar films. Those being Skipper (Tom McGrath), Kowalski (Chris Miller), Rico, (Conrad Vernon), and Private (Christopher Knights).

So I have a great idea! Lets make a spinoff film starring these penglungs! We’ll even get Cumberdink Humperbatch to play a role, since he particularly loves pengilins. That’s exactly the way you go about building a franchise, right?

You create an original property. You, over time, develop a fan base for it. And then you start dealing out subsidiary properties as fast as parking tickets in San Francisco. 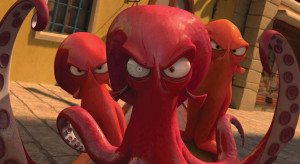 I have a soft spot for cephalopods. It’s right behind my ear.

Nobody much saw it, Dreamworks took another blow below the waterline and that was it for the adorable penglungs and, more importantly, Dreamworks’ Northern California studio, PDI.

Not too inspiring if you’ve got a Minions film coming out? Or can we even learn lessons when it comes to audience tastes and franchise potential?

While you ponder that question, in the cinemas and on the televisions and in your uteri, Disney/Marvel/Your Mom keeps churning out properties based on somewhat suspect superheros. As if vacuuming perfectly in corners is even a real superpower! 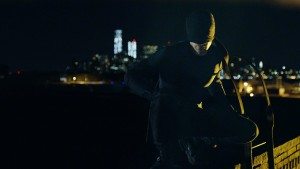 I thought dark was D.C.’s thing?

Daredevil; this is a show I’ve been watching. Why, when I’m as excited about Avengers: The Age of Ultron as I am about bad clams?

I’m watching this show because: a) I used to read Daredevil comics when I was in short pants and b) I am too tired after childcaring to think about anything substantial. So yes, I’m watching it. It is both pretty good and not at all good. Charlie Cox makes for a charismatic hero. The ‘street-level’ vibe of Daredevil’s semi-super-powered heroics are much more compelling than space gods saving the damn world every week. Then, on the other hand, Vincent D’Onofrio is a giant lumpen turd of a villain. In character as Wilson Fisk, the man manages to convey the ferocious heft of a tiny, fuzzy, pungwing wearing a bonnet with little flowers and shit sewn on it. 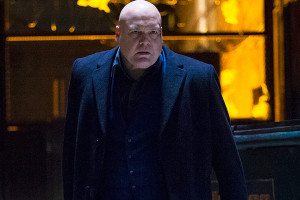 Basically, he’s not scary. He’s not imposing. He’s not funny or engaging or good to look at. And he sucks all the energy out of every scene he’s in like a black hole made out of ham.

Daredevil the show isn’t the comic I remember, but it’s familiar enough to be enjoyable. It’s not quite as enjoyable as the Penguins of Madagascar, but hey: Netflix.

Asking if Marvel is good at legging out a franchise is like asking if a pile of gold-encrusted rubies is worth anything. Marvel’s got superhero traction; they’ve strung all these (reasonably) idiotic characters and scenarios together into a fairly cohesive world, and they just churn it out with what sure seems to be deft strategy. 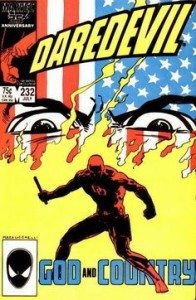 The Daredevil I remember.

In Daredevil, which all takes place in Hell’s Kitchen, Manhattan, the show’s premise relies on the fact that this part of the city was knocked to shit by the big battle that ended The Avengers. Of the crime going down here, there’s nothing that would get Tony Stark‘s knickers twisted, but if you’re a blind attorney with really good balance you might stay up late and give a few gangsters whatfor.

So this attempt at franchise flies. Signed up for season two? That’s right: it’s Daredevil. Not signed up for a sequel? Pengwilgns of Madagascar.

From this we learn an important lesson: superheros make money but not flightless waterfowl. Stick to long-established properties that pull on the heartstrings of those with cinema-attendance allotted dollars.

Unless you’re D.C. Comics and your idea of a blockbuster is Batman v. Superman: The Dawn of Justice. Have you been following the news about this one? 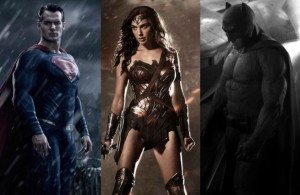 It’s like Warner Brothers decided to set themselves off from Disney/Marvel by intentionally making a film that would implode.

I’ll get excited about Mad Max: Fury Road, bringing back a thankfully re-cast Max to survive insane, practical stunts under the guidance of original director George Miller. I’ll roll my eyes at Arnold Schwarzenegger dragging his old bones out for one more run at the seriously flagging Terminator franchise. When it comes to Star Wars and Star Trek, I’m prepared to attend with low expectations—Harrison Ford’s return as Han Solo being whatever the opposite of confidence inspiring is.

Did you see Kingdom of the Crystal Skull? 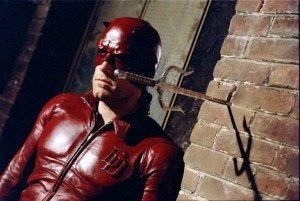 Sure. Why not? Affleck killed as Daredevil.

But Batman v. Superman. I’m not even sure what I can say about this film. The trailer looks like an ad for life insurance. The last Superman film, Man of Steel, sucked chunky gall bladder milkshakes. To this, they’re adding in a new Batman, one that follows in the footsteps of the Christopher Nolan/Christian Bale incarnation by applying a single adjective—’dark’—and the questionable acting talents of Ben Affleck.

As if we’re stupid enough to go see another Batman film, just because it’s got someone playing Batman in it? Which, granted, we probably are. In this one, Superman and Batman fight and I guess Aquaman and Wonder Woman show up so there can be more D.C. Comics films that are ‘dark’ and star Ben Affleck and are written by David Goyer.

When I started writing this post, I wasn’t sure where I was going, except to say: go figure. Audiences are strange. You can chase them, and try to manipulate them. Sometimes that works and sometimes it don’t.

Seems like studios these days are more and more often trying the ‘all their eggs in one basket’ strategy, since that’s coming up aces for Marvel. I just wonder how many of them will trip over their own feet trying?

I have to think that sooner or later the superhero thing will implode or the studios will.

Until then, I’ll be vacuuming in the corners. And yes, the Lycra bodysuit helps.