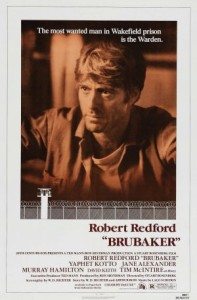 Brubaker is one of those films that you really need to read about. Mostly that’s because watching it is a disappointment.

Released in 1980, Brubaker reunites director Stuart Rosenberg (Cool Hand Luke) with the elements of his greatest success: those being the work farm prison and the sorry cons who try to survive it. In this go round, Robert Redford takes the place of Luke‘s Paul Newman. Instead of George Kennedy, Strother Martin, and Dennis Hopper (playing the best named character ever: Babalugats), here we get Yaphet Koto, M. Emmet Walsh, Murray Hamilton, David Keith (not Keith David, alas), Everett McGill (Twin Peaks‘ Big Ed), and — in his first credited film role — Morgan Freeman. There’s even a Lalo Schiffrin score!

Sounds great, right? Now, let’s add this: Redford’s Warden Brubaker starts the film as a con, slipping into his own prison undercover to see how bad it is.

How bad is it? Well, it’s a festering cess of ghastly misery. Prisoner ‘trustees’ police their peers violently and indiscriminately. Corruption sucks the food out of the inmates’ mouths, leaving them with maggoty sludge. The building is literally collapsing around them and instead of working to grow food on the prison farm, cons get lent out to local businessmen as slave labor.

All this Brubaker sets out to change, battling corruption and endemic violence as a lone wolf reformer. It is a ‘can he succeed’ story based on a real-life warden and a pair of prisons in Arksansas. It is also strangely inert.

What we have here is a dead parrot. 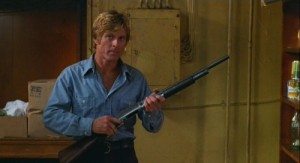 As Brubaker fights back against his various adversaries — in and out of the prison system — no character ever solidifies into someone worth our concern. We learn almost nothing about any of the prisoners, the politicians, or about Brubaker himself. When the levels of corruption the warden uncovers threaten the status quo, Brubaker gets cornered and ordered and isolated. Like Newman’s Luke, he remains indomitable. Except in this instance, what of it?

There are bodies buried in the fields, those of prisoners murdered over the years. Brubaker wants to dig them up. He refuses to let them stay interred. But why? Whom will he help by proving that his predecessors were criminal? He is, essentially, standing up for justice at the expense of everyone around him. His is a position so elevated that it’s unkind, a point many other characters in the film make clear. But Brubaker will not budge and this is deemed heroism.

Perhaps it is, too. Remaining unbowed in the face of threat; that’s brave. Exposing the dirty secrets of those in power is an act I’d usually applaud. Here, however, I fail to grasp what — beyond his rigid principles — Brubaker hopes to prove. In the film, he learns that his actions have fatal consequences on those around him, then he continues to act exactly as before.

By the end, Brubaker had me standing up for the forces of corruption. I’d call that disappointing. 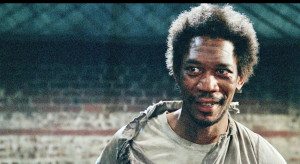 Compare this to Cool Hand Luke, in which Luke also couldn’t be contained. From it’s opening scene of decapitated parking meters, we understand what drives Luke. There is no corollary in Brubaker. As a pretend convict, he watches men die. He watches men get whipped and raped. Finally, when Morgan Freeman’s character, crazy from solitary confinement, threatens to kill David Keith’s Bullen, Brubaker reveals himself as warden. He places his trust in unproven men and sets forth to clean house.

It is mechanical and — worse — dull.

And the ending, a variation on the Dead Poets Society maneuver, feels as unearned as a Ph.D. ordered off the back page of Rolling Stone.

That’s the time when I allegedly ‘punched somebody out.’ He was the head of the studio, and there was a lot of talk about it—and by the way, it was grossly exaggerated. 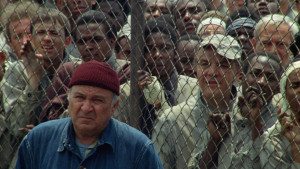 So ten days into the shoot, Rafelson goes and Rosenberg comes. That’s how it feels, too. Like with Ant Man, one wonders what vision accompanied the original plan, as here all that remains visible is a prayer for box office income.

Brubaker did well enough upon its release and even got good notices. I’m at a loss as to why. It plays like a tv movie, shoving standard prison-film beats into a standard-sized box. With this much collected talent on hand, it’s almost heartbreaking.