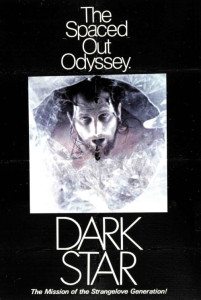 After much thought, I have come up with something nice to say about Dark Star, the 1974 sci-fi feature / student film directed by John Carpenter and written and staring Dan O’Bannon.

It is slightly funnier than Alien — which O’Bannon wrote next — and it introduced the world to John Carpenter, who can be forgiven pretty much anything for directing The Thing.

But yeah. Any film — and I watched the Director’s Cut — that starts with a written scrawl explaining that the film you’re about to see is a comedy… well, let’s just say I blame myself. It is one of the world’s unquestionable absolutes: there is nothing less funny than comedy explained. 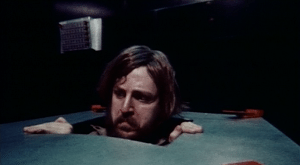 Judged as a student film, Dark Star is indeed interesting for its creative navigation of budget shortfalls. The ideas it addresses are also kind of fun in a precocious sort of fashion. Four lugs blooping around deep space, blowing up planets, and having college sophomore-style philosophical discussions; it’s like a Road Runner cartoon without the wit of Chuck Jones, watched while on ketamine.

According to the theoretically reliable Wikipedia page, the Director’s Cut of Dark Star trims out some of the late-edition footage that was shot to pad the original student work into feature length. I, for one, appreciated the shorter running time.

Dan O’Bannon plays one of the men on board the ship, and he acts just as well as any one else in the film, except for perhaps the beachball-with-feet alien, which improbably serves as the prototype for H.R. Giger’s xenomorph.

We all have to start somewhere. Stanley Kubrick‘s first feature, Fear & Desire, for example, is slightly less enjoyable than this film. Dark Star didn’t do much for me on it’s own, but without it, well — some of our favorite films wouldn’t exist.

But hell if I’m going to watch this one again.