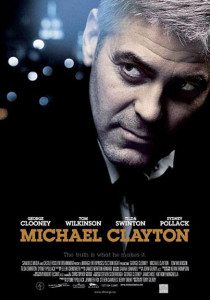 The climactic scene of Michael Clayton (’07) is two people talking in hushed voices outside a conference room for maybe three minutes, and it’s more exciting than a hundred Marvel movies smashed together into a tiny little ball and bounced off your forehead.

More impressive still, the lead-in to this scene is a kind of car chase in which two killers chase down Michael Clayton after fumbling a bomb into his car’s navigation system. They need to make sure he’s in the car, alone, before they can set it off via cell phone. Which is certainly a taut sequence, filmed with rapid editing and mounting tension. Thing is, the end of this sequence is shown at the beginning of the movie. Clayton gets out of his car to commune with a trio of horses on a hillside and his car blows up out of the blue behind him. A bit shocking, yes, but we’ve no idea what’s going on yet or what it means. So at movie’s end, we know how this plays out: the car bomb doesn’t kill him. 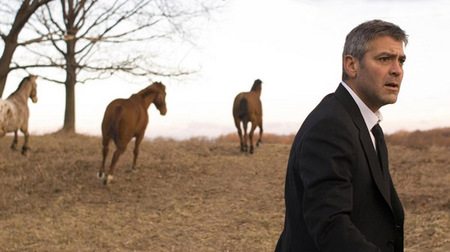 This is serious filmmaking here on the part of writer/director Tony Gilroy, to know you can play your car-bomb scene having told your audience how it ends, and to play it as the action climax to your movie. Then to follow it up with the real climax: a short conversation.

Gilroy is a master of the short conversation, and Michael Clayton is his best movie, as either writer or director. He’s best known for writing the Bourne movies, and his technique is the same across all of them. He plays scenes as sketches. Rarely do they have beginnings or endings. They are fragments, a few snatches of dialogue, a knowing look, which slowly add up to a whole. This is not an easy technique to pull off. Even in Gilroy’s hands it’s not always successful. Of the Bourne movies, the second, The Bourne Supremacy (’04) is the only one that really works. In the first he was still finding his footing, and by the third the formula had worn thin. Seems there’s a fourth one (which Gilroy also directed), but it stars Jeremy Renner, whose deal with the devil has been paying off for far too long, if you ask me. 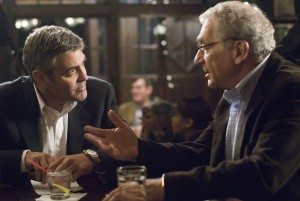 The actors in Michael Clayton are uniformly dynamite. We get Tom Wilkinson and Sydney Pollack in the same movie, both of whom, even in the small roles they’re typically given, always provide serious acting heft. Wilkinson, as attorney Arthur Edens, gets a particularly juicy part as the man who loses his mind, or stops taking his meds, anyway, after six years working on the same case: Defending U-North, a Monsanto-like corporation he knows has poisoned some 500 people.

Three scenes of his stand out. The movie opens with the first: his manic, voice-over rant about the mad dream revealing to him the truth of his evil existence. Later in the movie the rest of the scene is played out in a jail cell, with Arthur explaining his revelation to Clayton. The second is Arthur’s initial breakdown, and we only see it as a videotape played on a black and white TV, a deposition in which Arthur strips off his clothes and tells a young woman, one of the class-action plaintiffs, that he loves her. The last is Arthur’s wordless wandering through Times Square. Wilkinson sells it like only the best actors can. Freedom shines in his face. Understanding. Knowledge of something deep and true. He is the one sane man in the crowd. And he is completely off his nut.

George Clooney is Clayton. There are certain roles Clooney excels at. This is one of them. The low-key, put-upon mop-up man for a law firm. He’s great at what he does, but it’s a dead-end. He knows it, but he can’t escape. Gilroy fills in the spaces of his life with more brief suggestions of scenes. A weird conversation in the car with the son he barely pays attention to, a very nice older man telling him he owes $75K on his failed bar, two brief moments with his pathetic brother. Clooney’s talent is in playing understated. When there’s little else to the character, or when smug self-confidence is all that underpins it, there’s a flatness to his roles. But when underlined with desperation, as in Michael Clayton, his characters come alive. In his final confrontation with Karen Crowder (Tilda Swinton), the desperation bursts out, and sells the whole movie.

Tilda Swinton. She is never boring. As Crowder, newly appointed general counsel at U-North, she’s seconds away from a nervous breakdown in every scene. She’s in total control and utterly falling apart, constantly. She looks like she’d rather be anywhere than wherever she is, no more so than when she meets the hit-man and attempts to say she’d like Arthur whacked without actually saying so. The hit-man won’t let her weasel out of it.

Hold the demons in, Tilda

One little thread running through the movie is the book Clayton’s son is obsessed with, called Realm & Conquest. His initial description of it is all about lone warriors surrounded by traitors, with Clayton points out sounds all too famiar. Which scene is a kind of screenwriting trick: have the kid’s book explain the theme of the movie. But then it gets stranger. In what is actually his fourth wonderful scene, Arthur, a nervous wreck, in his underwear, lying on his motel bed, talks on the phone with Clayton’s son, who tells him about Realm & Conquest. Arthur is interested. But, like, really interested. When the kid’s stepdad tells him to get off the phone, Arthur almost panics. He needs to know the name of the book!

And once he’s dead, and Clayton is searching his apartment, there’s the red book, with passages underlined and highlighted in various colors. Is Arthur truly nuts? Yes, but in an interesting way. He knows the truth about U-North. He’s not nuts about that. What’s nuts is his belief he can hurt them without them hurting him first. The truth has been revealed to him, but it’s blinded him to everything else.

Clayton puts the pieces together by the end. He finds Arthur’s order for thousands of copies of the damning U-North memo. But he’s no smarter than Arthur. He’s just luckier. If he hadn’t seen those dreamy horses on the hillside and left his car to look at them, he’d have been blown to pieces. Thanks, horsies!

Then that final showdown between Clayton and Crowder. All the slow-simmering tension of the movie released at once. It’s quietly, intensely devastating. 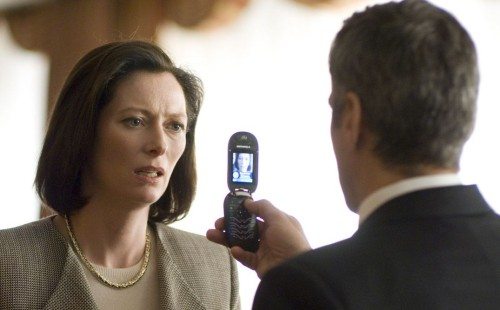 8 responses on “The Quiet Devastation of Michael Clayton”