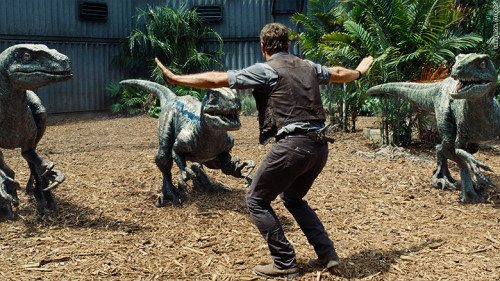 What is Jurassic World about? On the surface, it is a big summer blockbuster about dinosaurs and a newly revived franchise that will help Universal Pictures print money for the next 10 years or so. But what is it REALLY about? It is about Steven Spielberg and how his vast influence on movies is getting out of his control.

I have seen Jurassic World twice. The first time because my kids, both rabid fans of Jurassic Park, were dying to see it. The second time because it was bloody hot in Southern California one day and my kids wanted to see it again. The prospect of sitting in a movie theater with air conditioning was appealing. 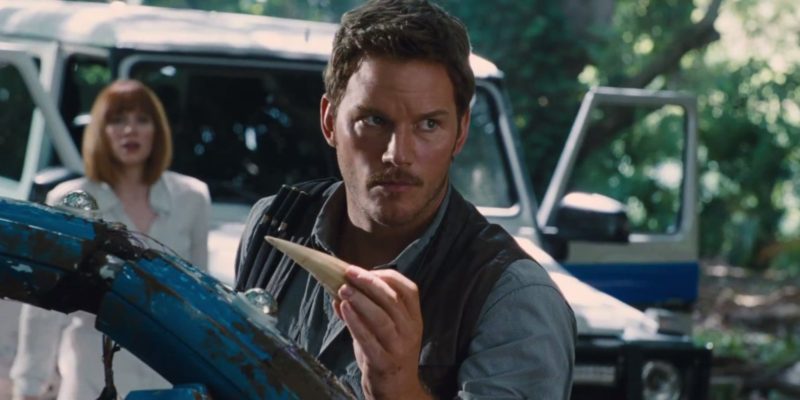 Not until the second viewing did I realize how many shots in the film reminded me of Spielberg’s movies. Chris Pratt’s character pulls a tooth out of wreckage like Richard Dreyfuss finding the tooth in Ben Gardner’s boat in Jaws. Parts of a truck chase resemble Elliot unhooking the tube from the van in E.T. Motorcycles speeding alongside the truck echo shots from Raiders of The Lost Ark.

Jurassic World seems to be about the experience of watching Spielberg movies. At the beginning of the film, we are introduced to a wide-eyed kid filled with imagination and wonder and a jaded teenager, too cool for anything and more focused on sex and new technology than any adventure. And because it is a Spielberg production, the subplot of divorce and unstable parents is shoehorned needlessly into the story.

The younger kid loves the park. (Ty Simpkins is the actor. I don’t remember the character’s name. Neither do you.) Nick Robinson plays the jaded teen. He hates it until he gives into how cool it is. Yup, even teens prone to saying “whatever” like a good Spielberg adventure.

But Spielberg films also belong to the generation who grew up on them and refuse to let go or give credit to anything new. Jake Johnson plays the Jurassic World team member who wears a Jurassic Park t-shirt and talks about how the old park (or movie) was better before it sold out. This self-important hipster is obviously forgetting that the original park was about selling out and merchandising from the beginning. Even the great Spielberg films were money monsters. As Mayor Vaughn says in Jaws, “We need summer dollars.” And that has been the mantra of every studio since the original Spielberg blockbuster was unleashed in 1975. 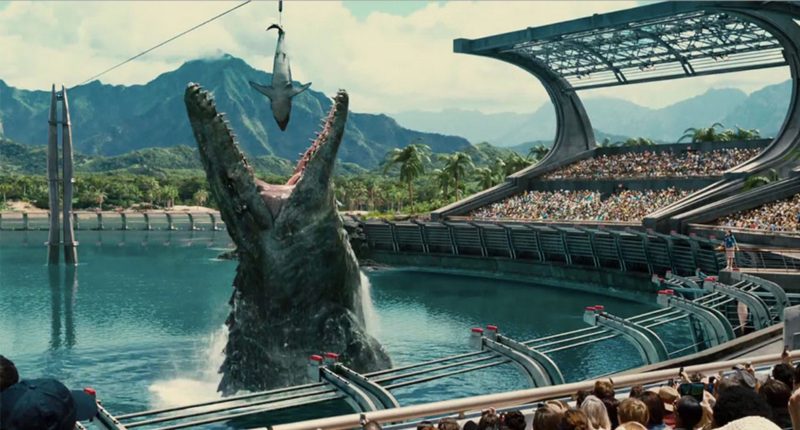 The dilemma of creating the summer monster was not exactly subtly illustrated in Jurassic World. The water-bound mosasaurus leaps up and eats a shark hanging from a hook for its lunch. Forty years ago, a shark was enough to satisfy the audience’s need for thrills. Now it’s a snack.

A new generation has to continue feeding the monster, whether that monster is the dinosaurs in the film or the movie-going public demanding a bigger spectacle. The new generation is symbolized by Bryce Dallas Howard, the daughter of Spielberg contemporary Ron Howard (who made his own Spielberg-inspired hit, Cocoon, in 1985), and Chris Pratt, the leading man the new audience loves, with The Lego Movie, Guardians of The Galaxy, and a rumored Indiana Jones reboot to boot.

Howard and Pratt make goo-goo eyes at each other and wring their hands about losing control of the park, just as the movie industry is losing control of which massive spectacles need to be made. Dinosaurs are no longer enough to bring people to the park. And movie audiences will mutter “seen it!” to any blockbuster that doesn’t push the proverbial envelope. 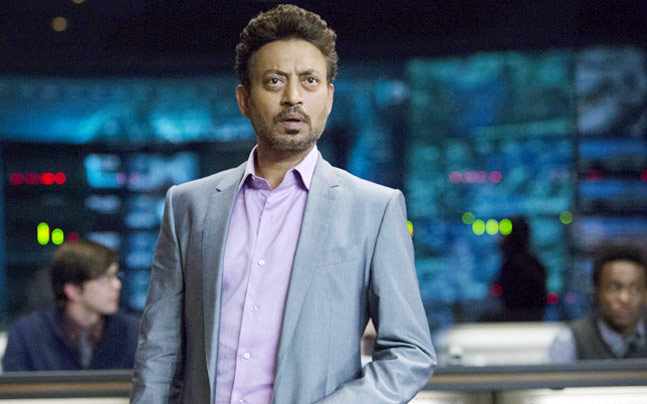 Wears a suit better than Spielberg.

And in the middle of this uncertainty over who controls the park, the character who represents Steven Spielberg himself arrives. The always reliable Irrfan Khan plays Simon Masrani, the billionaire who has taken over for John Hammond as the visionary behind Jurassic World. He’s someone who thinks he can do everything, including flying a helicopter. He can’t fly a helicopter. He makes it clear he’s not interested in hard numbers and research. He wants to know the emotional response people are having to the park. This mirrors Spielberg’s reputation of being a showman first and pleasing the audience not by reading focus group data but by making entertaining movies that work on a gut level.

Both Spielberg and Masrani are at the core of the problems on the island and in Hollywood. Masrani’s first reaction to seeing the artificial I-Rex in the paddock is to be thrilled it will give both parents and kids nightmares. Likewise, Spielberg, the executive producer of the movie, has given his seal of approval for director Colin Trevorrow to make the dinosaurs bigger and less realistic for the sake of spectacle.

And both the character and the real person are much more tied to money and business than they try to let on. Vincent D’Onofrio, playing a character whose name I believe was “bad guy who will be eaten,” brushes aside any notion that Masrani is not interested in money, pointing out his many investments. Meanwhile, Spielberg may be a great artist, but he is also the producer of the Transformers movies.

Over the last few years, Spielberg has predicted that big budgeted tentpole films will cause an implosion in the industry, making it impossible for anything other than a special effects epic from being made. Well who started Hollywood onto that path?

OK, I will accept blame for Kingdom of the Crystal Skull

This lack of self awareness is reflected in Jurassic World when Masrani admonishes Dr. Wu for creating the out of control I-Rex. Wu, played by B.D. Wong and one of the few holdovers from the original Jurassic Park, reminds Masrani that HE gave the instructions to make the dinosaurs scarier and more spectacular. This might as well have been directed at Spielberg. This is a monster of your own creation.

Eventually Masrani takes a helicopter with some soldiers to try and stop the rampaging I-Rex. But he loses control and crashes into the pteranodon aviary and dies. The winged reptiles cause even more havoc attacking the tourists.

The finale of the film renders the human characters useless as the dinosaurs fight, crashing into merchandise stands, chain restaurants, and essentially a shopping mall.

Capitalism is the battleground for the ending.

The T-Rex and raptors join forces because evidently some cloned dinosaurs are less evil than others. But a sequel was set up and a billion dollars was made. Universal announced another film in the series in the works. No doubt Spielberg will be involved.

Now please keep in mind, this analysis of Spielberg films is not meant to condemn him. I am clearly a fan of his movies and had a good time watching Jurassic World with my kids. But he is one of the main reasons why movies are the way they are now, both good and bad. Ever since 1975 when Chief Brody muttered “We’re going to need a bigger boat” Hollywood has been looking for bigger and bigger boats. Soon they may be taking on water.