‘Liveblogging’ is one of those reprehensible internet terms that I wish we could dump in a creek and forget about, but alas, it describes something that we otherwise don’t have a term for. And why are we attached to having a term for this thing? Because we’re lazy as shit! It is so much easier to ‘liveblog’ something than to write about it! Half-formed thoughts? They were half-formed in situ. Shallow analysis? Well, sure, but we had to keep one eye on the screen.

This can produce moderately strong sauce when you’re, say, a comedian on twitter during a political debate. But when you’re an amateur movie critic considering last summer’s slate of blockbusters? Come on. Have some self-respect.

Just kidding, I’m going to do it anyway.

I recently tried to get drunk as hell and stay awake all the way from San Francisco to Melbourne while ‘liveblogging’ garbage movies. I sort of pulled it off. Now I’m headed from Shanghai to SFO and I’ve got thirteen (thirteen!) movies in the seatback queue. How many will I type something about? You’re on the edge of your seat.

Fuckin’ Sondheim, amirite? I kind of like him. But then also it is easy to get fatigued. His melodic ideas are all so similar. And he’s constantly rhyming either too much or way too little or leaning on the identity rhyme or just being glibly clever instead of pleasingly lyrical. But he’s got a fantastic feel for the motion of a story through a series of songs – in fact, he’s better than anyone else I can think of at putting a whole show together. Having never seen it staged, I felt genuinely curious to hear the next number at every point in this movie. And there were very few disappointments aside from Johnny Depp’s and Chris Pine’s singing.

There are probably a hundred reasons not to watch this movie, but most of them would boil down to how much you don’t like musicals.

In all other cases: Recommended.

I loathed the first one of these and I kind of can’t believe I’ve just hit play on the second one. That first one, woof. The music was shitty, the jokes weren’t funny, and the fantastic cast was unforgivably squandered and abused. But we started this plane ride with Anna Kendrick singing and it’s not like we’re coming back to that later, so. 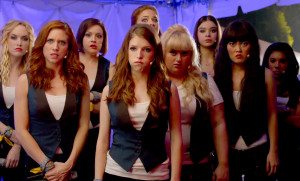 So. We’re back. The whole premise of these movies is ‘ha ha, a capella, that’s lame!’ with a side helping of ‘you like pop hits getting auto-tune-covered on Glee, though, right? Plus jokes about fat chicks and farts?’ The faux girl-power preening only compounds the offensive laziness of this kind of comedy.  I object all around. But anyway, the first one had a zillion percent profit margin so this one seems slightly more expensive and might be more carefully constructed.

No time is wasted inventing obstacles for the previously triumphant underdog Bellas, and the obstacles, like the movie, are silly, so it is clear that the Bellas will triumph again. The plot is not too important. I’m just waiting for any of these cameos to result in a funny scene. 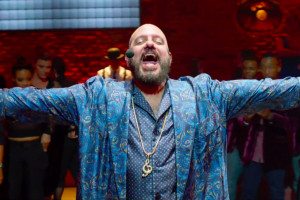 There’s an evil German a capella group. That’s pretty cute! I have had three wines and so far I’m less mad at this movie than I was at Pitch Perfect One. There’s no clear reason for the Snoop Dogg’s Christmas Album subplot. There’s no clear reason for the underground a capella faceoff party, or for anything else that happens here, aside from the product placements. Some scenes seem as though they aren’t even in plot order. Again, who cares. This movie is a delivery mechanism for gags and songs, like a twinkie delivers sugar and oil.

As usual, Keegan-Michael Key, Rebel Wilson, Adam Devine, David Cross, John Hodgman, Reggie Watts, Joe Lo Truglio, Elizabeth Banks & John Michael Higgins are funny no matter what you make them do. And as usual, sports cameos are so non-hilarious that they’ll grind any movie to a halt.

There are no lessons to learn here. Though, surprisingly, this movie could have been lots worse.

Let’s stick with the sequels to bad movies, because I think I need a nap pretty soon and I don’t mind if it’s during this one.

Seth McFarlane’s comedy is kind of a shameful and guilty pleasure for a lot of smart people. You’ll talk about its many shortcomings whenever the topic comes up, the cheapness of the jokes, the ad hoc sloppiness, the ceaseless racism and misogyny and homophobia, none of which ever quite convincingly crosses over from traditional garbage comedy to critique thereof. But you’ll leave it on when you’re stoned. Because there’s almost always a couple chuckles in there. And you’re alone. Nobody’s judging your taste. 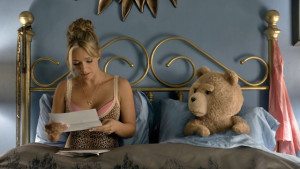 In bed with the bear

I can’t remember what happened in the previous Ted except that the little CGI bear was vulgar, and that was meant to be hilarious. In this one the little bear is vulgar again. The plot seems to revolve around the bear getting a hold of some semen for his human wife. There’s a non-funny sports cameo. There’s plenty of dialogue with various words for semen in it, and physical comedy with semen, and Giovani Ribisi. The second round of plot involves Ted proving that he’s a ‘person.’ Here’s where Seth McFarlane comedy occasionally shines: a dumb-ass nonsense premise is dragged, through dogged persistence, into a positon of high concept. The little bear is obviously not a person. It is a CGI animation voiced by Seth McFarlane. But if you pretend that there’s a world where everyone accepts that they’re looking at and talking to this little CGI bear, while having in fact noticed that he is a toy bear, the little bear’s struggle to gain legal personhood becomes a solid framework over which to drape gags.

I drifted off sometime during the deeply nerd-pandering Comic-Con segment, but I assume the small bear is eventually recycled into couch stuffing.

There have now been several movies based on Disneyland rides. As far as I can tell, this is the only one based on a whole section of the park map. 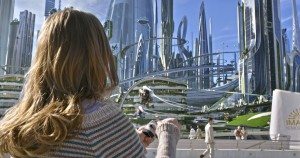 The magical world of the future!

Is this going to be about cool retrofuturistic robots flying around? Or is it going to be about sentimental baby-boomer hogswaddle? Possibly both? In any case, it’s a mess. It’s half an hour in and I am still intensely confused about how these characters are related to one another and what chronological order these scenes are occurring in. Do you travel to the future by jumping on the splash boat ride or by making physical contact with a pin that’s encoded with your DNA? Do you hallucinate your way in or do you physically visit? Why does the British tween bot show up fully formed in the ’60s when the rest of tomorrowland is in retro mode? Why does it take a full fifty minutes for any recognizable antagonist to appear?

I take back what I said before about Key being funny no matter what movie he’s in.

So anyway, it seems like some people want the future to be clean, safe, friendly, and bathed in a thick syrup of optimism, while others want… that not to happen? What exactly is standing opposed? Mean robots? George Clooney’s unresolved feelings of disappointment and cynicism? Come on Brad Bird, you can do better than this.

The airplane lands just as Hugh Laurie shows back up and it is too late for whatever long expository monologue he was going to present in explanation of wtf is going on in this thing. When a movie withholds the actual plot for so long, I suspect that it doesn’t really have one, and that it is hiding this fact in the hopes that my bothered confusion will fill the space usually taken by narrative tension. Amazingly, my connecting flight from LAX to SFO does not have seatback entertainments, so I may never know what Tomorrowland means. I’m probably okay with that. One hour and twenty-nine minutes of damp-eyed nostalgia for Disney’s Vision Of The American Future might have been plenty.

I can’t believe how badly I screwed up this plane ride. I had queued up a bunch of probably-good movies that I definitely want to see, and yet I went almost immediately for the barrel scrapers. Maybe I get what I deserve.

Maybe we all do.