Okay, assholes, let’s do this. Of course I do not address you as assholes, dearest readers of Stand By For. I aim my fightin’ words at these seven movies that stand united and determined to defeat me from my Favourites queue in the seatback entertainment system on this 17-hour flight to Australia. They will not defeat me. I will watch the shit out of these assholes. And also I may do some sleeping. 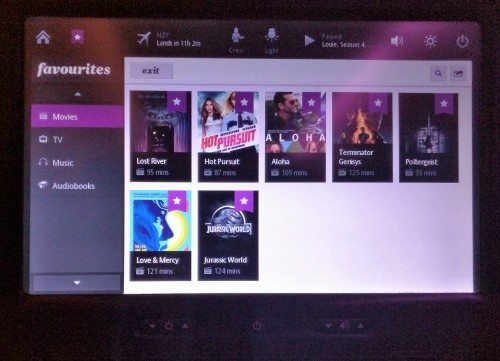 But first? And during? I’m going to do as much drinking as they’ll allow. So far: none. As usual, I have seen every known-good movie in the in-flight customer pacification subsystem, so I have filled my queue with things I’m obligated to watch for nerd reasons (Terminator: Genisys FUCK YOU THAT’S NOT HOW TO SPELL THAT sorry sorry not your fault probably) and things that maybe someone at a party told me were good (Love & Mercy?) and things that I have heard are horrendous in noteworthy ways (Aloha!!) as well as some wild cards (they remade Poltergeist? Ryan Gosling directed a fantasy horror or something??) and christ this is going to be a long flight. Okay, asshole number one is…

I fully expect this movie to eat a big sack of dumps. But I do like that Chris fellow from Parks & Rec. I think he’s funny! And these big stupid CGI monster movies are sometimes quite fun when the cgi doesn’t totally suck.

Muh oh. First shot is a (non-dinosauric) bird. Like just a normal bird. And it’s cgi. And it looks awful. 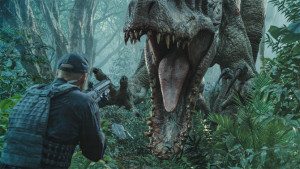 I was a little too old to be enchanted by the original Jurassic Park and I don’t think I’ve ever seen the sequels all the way through. So my viewing of this movie will neither skate on nostalgia nor trip over reflexive ‘reboot’ rejection. I just don’t give a shit about these dinosaur movies. So trust me when I tell you: neither does Steven Spielberg. His basest instincts (as, I guess, a producer?) are on display here: family schmaltz dribbled spasmodically all over the kind of easily digestible spectacle that tricks part of your brain into thinking you’ve been excited while the rest of you remains dangerously bored. The good and bad guys are cardboard cutouts, with the requisite initial female bad guy who just needs to learn the value of family and find a nice gun-toting boyfriend and then she’ll be a good guy/girl again.

a) waddle the plot forward, or
b) hamfistedly remind you how to feel about the characters, or
c) make you go ‘oooooooo.’

Would I be going ‘ooo’ more in IMAX 3D? If your movie isn’t interesting on the back of an airplane seat, it might not be an interesting movie. Still, there’s a sort of a dazzling competency to the proceedings. This is the pinnacle of professional blockbuster moviemaking. And it’s so sterile and toothless.

There’s a little kid who is written (but not acted!) as mildly autistic. There’s no chance whatsoever that his obsession with exact quantities of things won’t save the day at some point. I hope they reserve that for the end. This movie offers so little to look forward to.

At least people are getting eaten in a very explicit, PG-13 manner. That’s something. Wow, and the two wayward youths actually stumble into the decrepit set of the original movie. So panderific. And now I think we’re in the third act. Vincent D’Onofrio (baddest bad guy) seems like he’s actively trying to get everyone killed. The slobby guy from New Girl and the mousey guard from Orange Is The New Black fail to kiss, presenting the single amusing scene in the film.

Then T-Rex fights Whateverosaur, and we’re out.

In conclusion? Three wines. Terrible CGI throughout. If the littler kid saved the day by counting things, I missed it. He kind of saves the day by suggesting they need ‘more teeth’ at one point, which is vaguely quantitative. Maybe that line wisely replaced the original autisticness-to-the-rescue maneuver during a frenzied rewrite. Bad movie. Two stars out of five. Okay assholes, who’s next?

The poster makes it look like a gender swap on Midnight Run. We’ll see. I do love me some Reese Witherspoon and also a fair amount of Sofia Vergara. 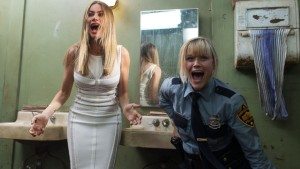 Reese is really selling it. She brings a heft that this kind of liiiiiiiight comedy doesn’t quite deserve. And it actually serves these nothingish jokes quite well, to have someone who can act her way through them like a real human instead of like a winking, mugging piece of shit. Sandra Bullock, who has played this exact role at least three times, could take a note.

Sofia has shown up. Uh oh, her joke seems to be that she’s a terrible harpy. I wonder how that will resolve. Perhaps she’ll be humbled and learn to have a little heart! While teaching tight-laced Reese how to do things a little less By The Book!! Naw, that’s the total opposite of their two characters. What are the chances?

There are good comedians doing small cameos. The script is kind of offensively shitty, like something written by the guy in the fraternity who is convinced he’s the funny one. Anyway, it bored me to sleep pretty quickly. I woke up enough to hear the ending. The ending did not involve any surprises.

2 wines. Very weak during the parts I was awake for, but hey, contained Reese and Sofia. Two stars out of five and a half.

I’ve read a lot about this movie because everyone thought it was terrible and racist and apparently, according to the Sony hack, everyone who produced it was well aware that it wasn’t going to work, but somehow could not figure out how to not make and release the movie. Still, and always, I have a soft spot for Cameron Crowe. I’m willing to give it a cautiously optimistic chance. 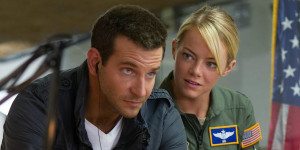 Is this a rom-com? Bradley’s being mean to Emma and she likes him anyway. She keeps explaining him to the audience, and he’s so damaged, and she thinks that’s so romantic. This is kind of like a cheap pastiche-verging-on-parody of every Cameron Crowe script. Except it’s the genuine article. Atrocious. I do NOT want to listen to these two people fall in love for two hours, particularly if it’s going to be this stilted and overwritten. But it’s that or just sit here. In the middle seat.

This is painfully sentimental from almost the first frame. And that’s Crowe’s stock in trade, but usually he balances it out somehow: a little comedy, a little insight. This time it’s is just one bad instinct after another. They sex it up at 56 minutes. The dialogue leading in is intolerable. But Crowe still knows how to leverage a music cue like nobody’s business.

The movie completely stops making sense, quite suddenly around 1:15. Seems like about a half an hour of plot stuff is missing. THANK GOODNESS. But also we’re now in a cartoonish world of hacking, launching, and defeating the bad guys by uploading unlimited rock and roll to a satellite. Who let this happen? I want to go read those Sony emails again. A lottttt of people should be fired.

No wines. It’s the middle of the night and I’m hung over already. Three stars out of seventeen. What a mess.

I’m going to close my eyes for Terminator. Hopefully, before I fall back asleep, something in the dialogue will tip me off as to why a mostly-robot looks like a 67-year-old former steroid abuser, saggy and haggard and gray. 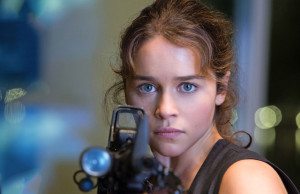 Faded in and out for this one but it seemed to be composed 90% of standing around in hallways. Did someone think the problem with Terminator: Salvation was that it was too outsidey? (Maybe they decided the problem was that they had neglected to spell it Terminator: Sylvyshun.)

Time travel movies are almost always chock full of nonsense (exception: Timecrimes, the most sense-making time travel movie ever), but this one seems particularly egregious. Why are Sarah Connor and whelp so young if it’s already SkyNet launch day? Why is there so much alternate timeline babble and so little running away from terminators? And I still don’t know why terminator Arno is as crusty as real-life Arno. But then I did sleep through the first three quarters of this dookey pile.

It’s morning now and I have officially stopped ordering booze. Plus, the airplane omelet was terrible. So Terminator: Ginosnorez gets one star. Out of like eight. Khaleesi, have a very stern talk with your agent.

Okay! I think I have time to watch this Poltergeist reboot before we land in New Zealand and I have to change planes. It has Sam Rockwell in it! He’s always great! He was great in Charlie’s Angels for fuck’s sake. 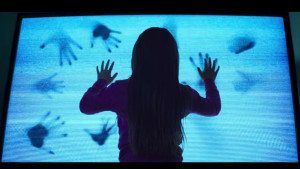 Self-doubting mom. Humbled dad. Hawt teen. Two vulnerable youngs. This is a family that seems ready to be menaced by ghosts! One such ghost is already high-fiving Maddie through the flatscreen TV. And the creepy clown doll is appropriately modernized, by which I mean it’s a dark, gritty reboot clown doll. It’s all filthy and violence-addled.

Ha ha, they found a bone while gardening. I bet it’s a ghosty bone! OooooOOOOOooooooooooOOoooo. Oh shit, and the ghosts fold, spindle, and mutilate your comic books? That is scary. Not as scary as dad’s depression-related overspending.

They made a joke about the ancient tribal burial ground from the first movie. Tee hee, isn’t it funny. Isn’t it funny how our unnecessary reboot isn’t quite as good? I’m surprised, though: it’s not that bad! The kids are doing a pretty solid job of getting menaced so far. The pacing is just right for a non-gory horror movie. The characters seem to have wants and needs that are identifiable and that drive their behaviors, kind of similar to how actual humans act. It’s only been a half an hour, though. This thing can definitely still fall apart.

Oh, wait, there’s like twenty clown dolls. They do not result in a clown fight sequence that is twenty times scarier than the original, so I don’t know if they got their money’s worth there. The ghosts have gotten pretty grabby now! Grabby clown, grabby garage-floor mud hole, grabby tree, grabby closet wraiths. Annnnnd, now Maddie’s in the TV. That’s the classic thing. That’s what we’ve been waiting for. Modernized: analog static and scan lines melded with digital TV signal decoding errors. Haw haw. Those things don’t go together.

Um…. where’s our midget psychic please? She is replaced by a team of flaky ghost hunters? I object. Oh, and also subbed in by Lane from Mad Men? That’s fine then. 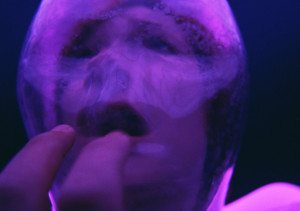 I got pretty snoozey on the Auckland to Melbourne leg and only managed to watch one more movie. It was Ryan Gosling’s directorial debut, Lost River. A little bit David Lynch, a little bit Gus Van Zant. A lot bit mumbly indie fare, kind of light on plot and heavy on meaningful stares into the middle distance while smoking. No fun involved, just desperate people being miserable and everything getting consumed by fire. But the locations were kind of great and I liked the score. Nine stars out of seventeen! How did this one manage to be the least raging of an asshole of the bunch?

Stand By For Mind Control thanks you for tolerating yet another sort-of-liveblog of a bunch of movies that weren’t that good. Till next time!