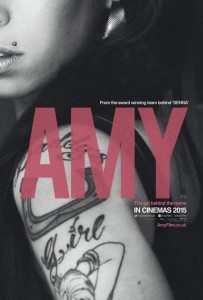 It’s been a week since I watched Amy, a documentary about singer Amy Winehouse released earlier this year, and it’s still almost too depressing to write about. I’ve rarely encountered a sadder movie, and I don’t mean sad like Inside Out is sad, I don’t mean sad beauty, I mean the saddest kind of sad there is, the tragic sadness of a beautiful soul crushed before your eyes, and worse, crushed before the eyes of those who knew her, and worse, crushed by those who knew her.

What I thought I knew about Amy Winehouse before seeing Amy was that she was a wild, hard partying comet streaking across the sky to her fully earned demise. A tragedy, sure, but the kind where you say, gee, what a shame, a singer like that killing herself with drugs, but hey, par for the course. Watching the movie it becomes clear almost instantly that Amy’s drinking and drugging was her only way aside from singing to self-medicate away her depression and bulimia. Writing the poems that would become her lyrics was self-therapy. 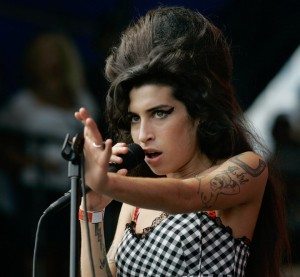 Why didn’t she have any actual therapy? She didn’t want any, and no one close to her lifted a finger to suggest otherwise. One of the saddest moments in the movie is when, early on, before Amy becomes famous, her friend and manager, Nick Shymansky, pushes her to go to rehab for her alcohol addiction. She says she’ll do it if her father agrees. But her father, Mitchell Winehouse, doesn’t think his little girl needs to subject hersef to that nonsense, so she doesn’t go. From that moment on, you know you’re watching a woman slowly dying.

Her father is happy to ride the gravy train. Since the release of the movie he’s complained loudly about how he’s portrayed, but you know what? Fuck him. No one put words in his mouth. No one told him to ignore his daughter’s pleas for help, for love, for ANYTHING from ANYONE, EVER. All he and everyone else does is push, just steadily push, one more tour, one more show, one more album, otherwise the fame dies and the money dries up. 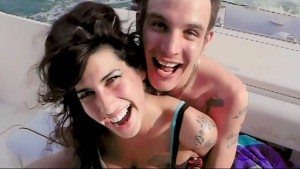 Worst of all is Amy’s boyfriend/ex-boyfriend/husband, Blake Fielder, the poster child for enabling. He dates her early on, then dumps her to return to his ex-girlfriend. Amy’s done with him, and good riddance, you think. The song “Back To Black” tells the tale. Only what’s this? The Back To Black album is an enormous hit? Amy is suddenly the most famous singer in England? Next thing you know, there’s Fielder on her arm. He knows a good thing when he sees it, and what’s Amy see in him? He was her first love. He’s an irresistably bright zapper. She flies straight into his arms. They’re terrible for each other. When he winds up going to prison, it’s even worse.

Amy is happiest early on in her singing career, when she’s playing small jazz clubs, singing her heart out. Her voice is rough and silken and sexy and sad and powerful, and her songs, her lyrics, are emotionally naked. She puts it all out there. You can see right away she’s not desperate for fame and adulation. These songs have to come out of her. She has to sing them. Fortunately or not, it’s the kind of pure artistry that can bring one fame. And so it does for Amy.

Fame is the monster that eats her. Her father, her husband, and too many others are the ones who feed her to it. 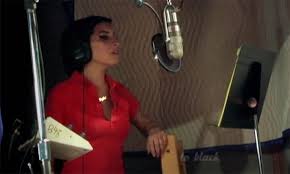 It’s impossible to watch this story unfold and not wish someone had put the brakes on. It’s so clear what fame is doing to Amy, how badly she needs to step away from it, to get some professional help, anything. Instead it takes her drunkenly meandering around stages, barely singing, and insulting audiences before anyone says, hey, let’s call off the shows for a bit, yeah?

One of the many people director Asif Kapadia interviews is Amy’s bodyguard, Andrew Morris. He comes across as the most observant, kind, and sensible of everyone in Amy’s life. He’s the one person to tell her “no” when “no” is what she needs to be told, who seems to immediately recognize what this life is doing to her and how no one is giving her the help she needs. It’s too bad he wasn’t her manager. Or her father. Maybe she would have pulled through. 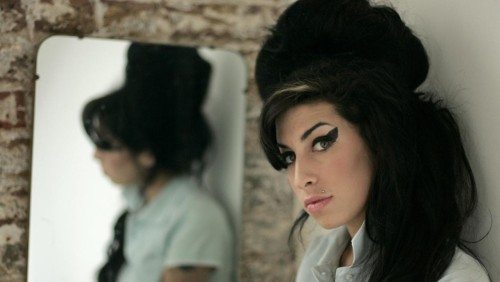 I write all this never having been a huge Amy Winehouse fan. I like Back To Black, the album she cut with Sharon Jones’s band, The Dap Kings, but never really listened to anything else she’s done. Knowing nothing about her, I must have imagined she was more a typical pop star construction who happened to have a killer voice. Watching this movie, seeing who she is and where her music comes from, I feel like I’ve been flipped on my head. Amy Winehouse is—alas, was—the real thing.

Amy, the movie, is like watching a slow-motion car crash. Cinematically, a good thing. Kapadia wisely leaves out any narration, instead using as voice-over the interviews he conducted with her friends, family, and business associates. He also has access to a ton of home video clips, concerts, interviews, recording studio footage, and etc., giving him a large canvas to work with. He builds the story slowly, bringing the viewer deeper and deeper into Amy’s life and mind, until you want to punch out half the people who know her.

Even more horrible are the clips Kapadia includes of TV personalites like Graham Norton and Jay Leno cracking jokes about Amy’s drug use. So easy to laugh at the famous when they’re down. But when you’ve just watched two hours of a young woman crying for help as the entertainment industry crushes the life out of her, you’re no longer laughing when that same industry mines her downfall for an easy gag—you’re weeping.

Amy is very good documentary. Check it out, but be prepared: a sadder story you won’t soon find.

2 responses on “Amy, In Which The Life and Death of Amy Winehouse Will Depress The Fuck Out of You”