From early on I wasn’t keen to see Pixar’s latest, The Good Dinosaur. Something about it rubbed me the wrong way. And for once I can tell you exactly what that thing was — poor taste. And again, for once, the poor taste wasn’t mine. 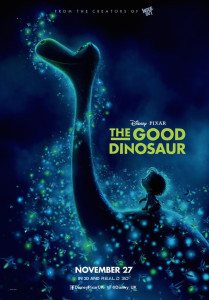 I thought, and think, that while it’s a sweet little thought experiment to ‘what if’ the dinosaurs’ evisceration by meteor strike, it’s tacky to do so when fundamentalists are building replicas of Noah’s Ark and questioning evolution in public schools and just generally confusing faith with history. I think it’s in especially questionable taste when your film — about dinosaurs and humans living side by side — has nothing to do with these actual issues that are caustically dividing the country (and the world) at the expense of many lives.

Then I went to a 20th anniversary celebration of Pixar at San Francisco’s Castro Theatre, at which the studio’s founders and directors showed old clips and told stories for hours. It’s hard to recall that Toy Story was the very first 3D animated feature, and that it almost got crushed as severely by Disney as meteoric impact did the dinosaurs.

At the evening’s end, they showed a clip from The Good Dinosaur.

It was full of the feels, this clip. It reminded me of what Pixar can do even when their subject matter seems infertile.

And so, I went to see The Good Dinosaur. It is a film that I can best describe as unripe. From top to bottom it feels in-progress. Perhaps good in moments, but rarely great and even then, only great in strange, disconnected ways. 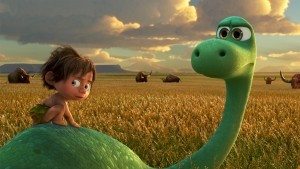 The Good Dinosaur is great in its texture, for example. Having recently seen Toy Story, the advances in 3D computer animation could not be clearer. Water. Smoke. Feathers. Grass in the wind and clouds swirling around icy mountain tops — these things are astounding in their tangibility.

In terms of character design, however, not so much. This hyper-realistic world is populated by cartoonish creatures. The dino characters all miss the uncanny valley by an aeon. The clash between creatures and environment only emphasizes the scattershot story.

On the positive side, the film once again proves that Pixar understands the importance of presenting an idea — like a thesis — and then incrementally nudging that idea to a conclusion that makes you cry.

In this case, that idea is about family. And the clip they showed at the Castro, that was the one in which Arlo, the film’s titular dinosaur, tries to explain to Spot, his dog-like human companion, what it is to have and also to not have family. Without a doubt this is the film’s best scene.

Many of the film’s other scenes, while engaging, and entertaining, and exciting do not belong with this, the film’s best. The Good Dinosaur starts with an asteroid narrowly missing Earth, the dinosaurs surviving the non-collision, and then evolving to become homesteaders with farms and tools and hang-ups. While this may be an amusing thing to picture, it lacks the deep creativity that fed the world behind the closet doors in Monsters Inc. 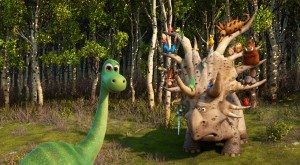 Perhaps the film’s second best scene, but it has little to do with anything.

It feels more like the creativity that anthropomorphized the cars in Cars, envisioning them as basically humans with wheels. They drink gas, but don’t live in parking lots. Who uses their seats? Why have steering wheels? I digress.

Here, in The Good Dinosaur, the characters are humans who just happen to look like dinosaurs. They grow corn and worry about the winter. They raise chickens, of which Arlo is afeared for reasons as clear as those that might explain why vegetarian dinosaurs would raise chickens in the first place.

Never-thee-mind, for what’s important is that Arlo is afraid. The Good Dinosaur sets out Arlo’s goals as conquering this fear, contributing to his family, and ‘leaving his mark’ — literally his footprint on the family grain silo.

Tragedy strikes, of course, isolating Arlo and setting him on a treacherous journey home. In this trek he’s accompanied by the miserable creature who instigated his situation, the human boy Spot. So it’s a film about conquering fear. Or about the importance of family? Or about making one’s mark? Or, for a while in the middle there, it’s a Western about cattle rustlers.

The Good Dinosaur was delayed. Its director was replaced (Bob Peterson with Peter Sohn) due to ‘story problems.’ The whole thing was reimagined and it was released. 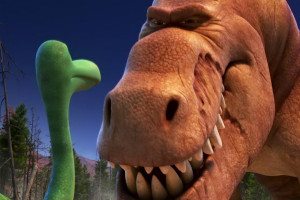 That must have been an awfully large crocodile.

But it’s not ripe. Its conclusion doesn’t fit its instigation, and neither meld with its middle. Arlo doesn’t, in any way beneficial to his family, make a difference. He does not earn his mark — the affixation of which closes the film. He conquers his fear, but in stages too grand for a boy-dinosaur scared of chickens.

And speaking of scared, The Good Dinosaur is scary, reducing the young girl in front of me to tears for a majority of the picture.

The Good Dinosaur may be a film about family, but of the two family members most important to Arlo, neither makes it to the conclusion. One dies and the other gets sent away. Both story choices make sense, but since those choices leave Arlo returning to his mother — an ill-defined character voiced by Frances McDormand — and siblings who torment him, the film ends on a series of off notes.

Any critical impact, which might shift the entire landscape of your mind, whizzes past your globular head, leaving the giant lizards to run the shop. As if they’d be stupid enough to make the same mistakes our mammalian minds continually force us into.

I left The Good Dinosaur not unhappy, just discontent. What would it be like if humans and dinosaurs lived side by side? Pixar isn’t interested. The only investigation it offers within is ‘what if dinosaurs acted like humans, around humans who acted like dogs?’ So, if you recast the film’s characters to be more species appropriate, what are we left with?

I’m pretty sure they don’t know the answer either.