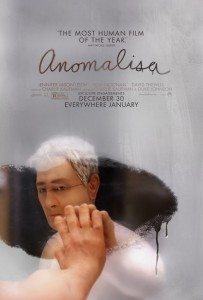 I expected more. Blame the early reviews calling Charlie Kaufman’s latest, Anomalisa, the greatest movie since the invention of eyeballs. It’s uniquely strange, but it’s no Being John Malkovich, no Eternal Sunshine. It’s a stop-motion animated version of a play Kaufman wrote that takes place in a hotel, mostly in a single room, and concerns two characters who, for one night, delude themselves on the matter of love.

David Thewlis voices Michael Stone, writer of a how-to book for those in customer service titled How May I Help You Help Them?, who’s come to Cincinnati to give a speech at a convention. Stone is middle-aged with a wife and a boy. He is miserable. All humans appear and sound the same to him. Being that the characters are stop-motion puppets, their looking identical is easy, and as for their voices, every character aside from Stone and the woman he later meets speaks in the velvety tones of Tom Noonan, creating an eerie atmosphere no matter where Stone goes. 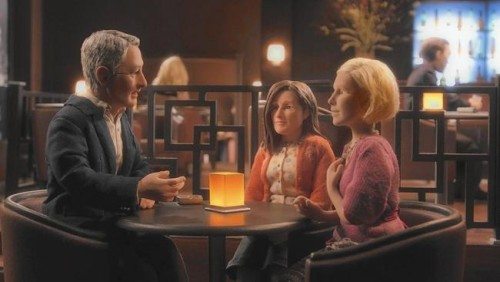 The woman, the anomalous Lisa of the title, is voiced by Jennifer Jason Leigh, and the moment Stone hears her, he wants her. She’s played as a frump with extremely low self-esteem and an unhealthy obsession with the very famous (to her) Michael Stone. That he appears creepily obsessed with her on first sight bothers her not at all.

Much has been made of the puppet sex scene. And indeed, Team America this ain’t. It’s shot like you’d shoot a highly realistic sex scene between two humans. It’s not quite uncanny valley weird, but it’s close. The puppets’ heads and faces are obviously sectioned off as if the filmmakers felt a small reminder of puppetness was needed to avoid undue creepiness. But their bodies are designed to look as human as possible. They do. Watching naked puppets screw feels dirty. 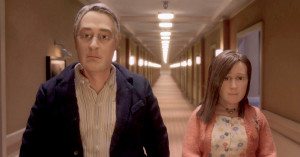 While Anomalisa is always interesting, it’s a bit plodding for an 80 minute movie. I was forever expecting the long, slow scenes opening the movie to lead to a larger emotional revelation. Instead poor Stone ends the movie as he begins, shut off from the rest of humanity, and worst of all from himself. It’s a worldview Kaufman has explored again and again. And sure, it resonates. At times we all feel cut off from others and from ourselves, some of us more intensely than others, but I’d hoped the movie might offer a little more insight into this not-really-a-revelation.

It just seems like such a common trope, the “everyone is a robot/alien/actor/dream except for me” delusion. It’s fueled science fiction for ages, and inspired movies as different as Invasion of The Body Snatchers, The Matrix, and The Truman Show. Kaufman just adds the extra angle of the special person stuck in a world of automatons feeling equally fake. I mean I suppose we could take the meta-textural viewpoint and consider that the characters in Anomalisa are in fact puppets being manipulated for purposes beyond their comprehension by giant alien beings. But the movie never goes there, so I won’t either. 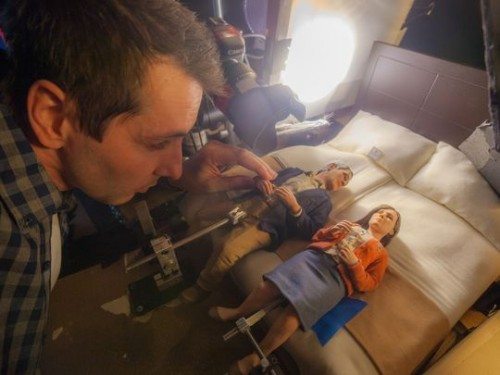 Giant aliens are forcing us to have sex!

Anomalisa, which Kaufman co-directed with animator Duke Johnson, is notable for its artistry. The stop-motion and the puppets are wonderful. The three voice actors are excellent. Carter Burwell provides a typically odd and low-key score. It goes at its subject matter with single-minded purpose. But I’m at a bit of a loss as to what it adds up to or what I should take away from it. I guess “it sucks being human,” mostly.

My favorite scene is a dream sequence late in the movie. It feels like the one time the fact of this movie being animated really comes into play. Maybe stretching this story beyond the bounds of the stage play it came from (Kaufman is said to have changed the script essentially not at all) would have pushed it into more revelatory emotional territory. 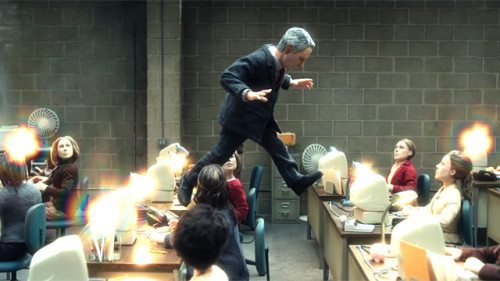