Someone — in this case Dan Aykroyd and then Harold Ramis — thought up the Stay Puft Marshmallow Man: a 112’6″-tall, walking, sailor-suited, church-stepping, jiggyly-jolly manifestation of Gozer — Volguus Zildrohar and Lord of the Sebouillia — a vengeful Hittite god.

And that is genius. You cannot deny it. And you also cannot deny that Ghostbusters — from start to finish — is also genius. Watching it again, for umpteenth time, with friends and their pre-teen kids, there isn’t a scene, or moment, or expression that disappoints. I pulled out my Vince Clortho colander helmet, placed it upon my head, and tried not to recite every other line along with the film’s characters.

I sort of succeeded.

I cannot say. I might toss in contenders — Betelguese the freelance bio-exorcist, who could maybe hold his own against Stay Puft; or Jim Cunningham, who deserves high placement along the lifeline as well — but that’s not really the point. The point is: just try to come up with an idea as brilliant as the Stay Puft Marshmallow Man and get that through modern Hollywood. Try to make a film as original, and clever, and free of pandering as Ghostbusters and you’ll end up with what?

This new Ghostbusters reboot? Which looks as original and exciting and necessary as The Force Awakens. I mean: watch that trailer and tell me what new idea, what clever concept, what artistry shines forth? It could be a decent film, I suppose, but one wouldn’t think so based on that trailer. Based on that trailer, you’d think you’ll get a film just like the original Ghostbusters, only bled of all originality and purpose beyond the commercial.

And, if that’s all you want, Ghostbusters II already exists. It adequately sates your thirst for more of the same so long as you’re not actually hungry for genius. As long as what you want isn’t something thrilling in its originality, born of passion and the whirling dervishes of fevered, funny minds. 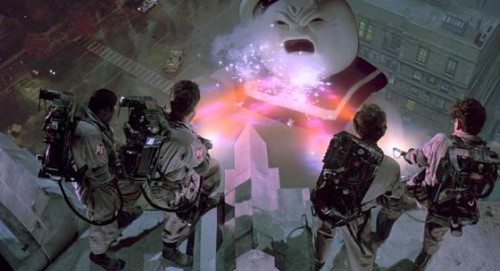 So to Stay Puft I raise my glass. To those that eschew the easy money in favor of eternal glory, I drink deep. To Ben Wheatley, Shane Carruth, Werner Herzog, Joel & Ethan Coen, Steven Soderbergh, Richard Linklater, David Lynch, Park Chan Wook, Jim Jarmusch, Asghar Farhadi. And others — your favorite filmmakers, so long as they aren’t {names I won’t list}. To them, and to Stay Puft, I’ll get sauced and stay true.

Stomp on my churches. Scald my city with sticky confectionary floods. Rend your rictus with screams of inchoate rage and explode my face with eldritch fire. Make me sit up, goddamn it. Make me notice you for you. Make me speechless.

Because that’s how you make a movie.

3 responses on “An Ode to the Stay Puft Marshmallow Man”