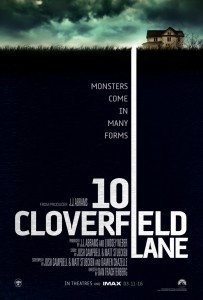 To its credit, 10 Cloverfield Lane is an atypical sequel. Mostly because it’s not at all a sequel to Cloverfield (’08), but an original script tweaked by producer J.J. Abrams et al. to fit into its universe. Unless it doesn’t take place in the same universe. I couldn’t say for sure. In any case, it’s an entirely different kind of movie. No faux-found-footage, no hand-held nausea-inducing cinematography, just a three-hander in a bomb shelter.

Being a J.J. Abrams production, 10 Cloverfield Lane is part of his dopey “mystery box” world, wherein everything about the movie is a giant secret, which tends to work out much better as an advertising concept than a movie. And so it comes to pass with 10 Cloverfield Lane. I liked the trailer more than the movie.

But in the interest of maintaining the mystery promised by its advertising, I’ll split this piece into two, beginning with the non-spoilery half. For those who’ve seen it, we’ll talk details down below. 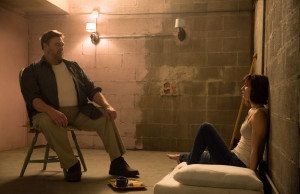 Things kick off fast. Michelle (Mary Elizabeth Winstead) hurriedly packs up her apartment and hits the road, leaving behind an engagement ring. In her car, after a brief conversation with a confused fiancé, she’s struck by another car and flips. She wakes up in a cinderblock bunker chained to the wall. Ex-military man Howard (John Goodman) appears with some eats and tells her he saved her life. Seems they’ve been attacked, either nukes or chemicals, and the air outside is deadly. Michelle is entirely unconvinced.

Howard’s bomb shelter is more than one cinderblock cell. He’s an expert in the ways of survival. His comfy lounge is tricked out with a jukebox, a VCR, board games, puzzles, and a lifetime supply of fashion magazines.

Also down there with him is Howard’s slightly dopey neighbor, Emmet (John Gallagher, Jr.), who it turns out wasn’t abducted. He begged to get in the shelter with Howard. Says he saw a weird bright flash and ran for it.

Michelle remains unconvinced. She wants out.

Kids and their selfies, I tells ya…

Michelle was a problem for me. I never believed her as a human being. She spends the whole movie in a state of tense disbelief, and it bored me silly. Howard and Emmet are barely more plausible. It’s the kind of movie where no one asks the obvious questions, no one offers any sensible explanations, and no one has any kind of discussion you’d have in this situation. They’re all content to stare weirdly at one another.

It’s a good thing Goodman is on hand. He gives the movie its only life. The other two are too blandly generic to care about, but Goodman is Goodman. Quietly menacing or violently angry, he’s a threatening, powerful presence.

Back to the mystery box, the strangest thing about this story is that there’s not a single surprise. Everything is telegraphed far in advance, spoiling the inherent uncertainty of the situation and characters. Which is frustrating because the movie is played as though it’s all about the uncertainty, while never once leaving you with any doubt as to what’s really going on. 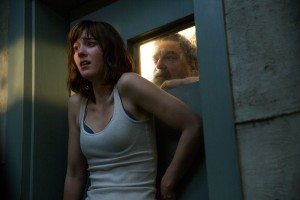 10 Cloverfield Lane is directed by Dan Trachtenberg, a first time director. He seems very unsure how to handle the movie’s pacing. Rather than allow for natural lulls, he maintains a constant level of tension, mainly through the use of loud music. I find it numbing when tension is built only by upping the score’s volume. The script is by first-time writers Matthew Stuecken and Josh Campbell, with a rewrite by Damien Chazelle of recent Whiplash fame. They have trouble creating plausible characters and understanding how and why to dole out information to the audience.

It brings to mind a wonderfully odd sleeper from the ‘80s, Miracle Mile, in which a citywide panic slowly evolves late one night after a man receives a phone call in a diner saying the nukes are in the air. What works so well in Miracle Mile is that no one, neither the characters nor we the audience, knows if the man on the phone is lying or not. The movie could go either way. The makers of 10 Cloverfield Lane imagine they’re creating the same uncertainty, while at the same time ensuring a total lack of mystery.

The audience I saw 10 Cloverfield Lane with seemed to enjoy it a lot more than I did (including Mrs. Supreme Being), so who knows, maybe I’m crazy and you’ll love it. To me, it was a nice set-up squandered.

AND NOW, THE SPOILERY HALF. YOU HAVE BEEN WARNED.

What 10 Cloverfield Lane wants to suggest is the genuinely spooky idea of waking up in a bunker to find yourself held by a man claiming war has rendered the surface unliveable, which man might also be a kidnapper and killer. This is a great set-up. You could play it with the characters believing him at first, then slowly coming to see cracks in his façade, realizing he’s insane, killing him, and escaping only to find out he was right all along.

It’s almost the movie, but in every detail, it’s not. 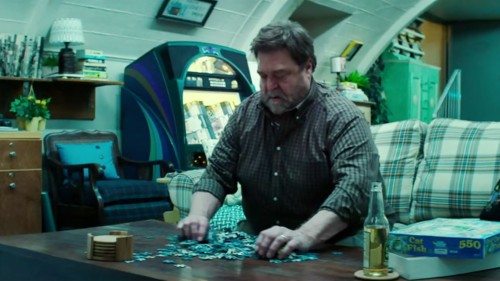 The first bizarre choice is when Michelle is driving. From her radio we hear about a mysterious country-wide black-out. It’s all we need. She might have missed it, but this is crystal clear movie language—nuclear war, alien invasion, zombie apocalypse. There is no grey area here. You can argue that we don’t really know if something’s up, but it is. This is a trope. It’s what it means. Serious shit is going down and we know it.

Add to that the strange way her leaving is shot. The sound design, the visuals, everything is geared to yell, SOMETHING TERRIFYING IS COMING. Imagine if this opening were shot as plainly as possible. Imagine if Michelle had simply been driving along in a perfectly normal way on a perfectly normal day, got in a terrifying accident, and woken up in the bunker. We’d have no idea what to believe. Just like Michelle. Instead, whatever her mindset is, we know exactly what’s happening. 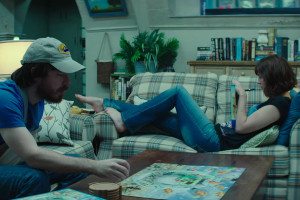 I was glad they addressed this fairly early with her attempted escape, but right away something else is given away: Howard’s truck is dented, and Michelle has a flashback to her accident: the truck is plainly evident. So we know he hit her. This is to give her something new to be afraid of. But right away Howard admits to having hit her. Does she believe him? Should we? What’s the alternative, that he purposefully got in a wreck so he could abduct her? No, because there really is a disaster up above. What if he’d admitted to hitting her car without her having remembered he’d done so? That would be strange. When someone admits to something you never suspected them of, it’s cause to wonder. What’s their motivation? Howard’s motivation is clear in the movie: he knows she saw his truck, so he wants to ease her fear of him.

Despite the obvious reality of what’s going on outside, Michelle’s attitude of tense panic never alters. We get a montage of time killing, but even there Michelle seems committed to escaping. And then she finds evidence of the kidnapped girl. Really great evidence. There is no room here for doubt. Howard took her and killed her.

So now Michelle and Emmet are desperate to get out—into the possibly nuclear wasteland above. This all feels unneccesarily confused. 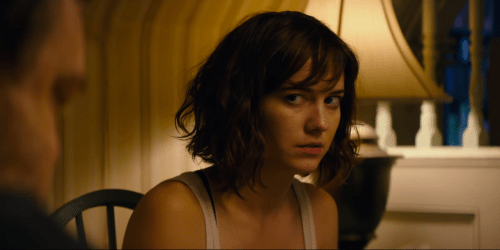 Imagine if finding possible, cicumstantial evidence of a kidnapped girl was the first thing to clue Emmet and Michelle into something being wrong with Howard. What if it made them question for the first time his story of nuclear/alien disaster? What if in finally busting out, the condition of the world above was still a total mystery?

I understand why the filmmakers went with the opening they did. Waking up in a cinderblock room chained to a wall, hooked up to an IV, with a creepy man appearing to say nothing but “I saved your life,” then vanishing, is certainly a freaky notion. But how does it help tell this story?

What if Michelle had woken up in the lounge with both Emmet and Howard there to explain in full what had happened? What if, after initially being freaked out, she’d come to believe in what Howard told her? What if we had any real sense of them living life in the bunker for a long time before suspicions crept in? We’d have a far more unsettling movie on our hands.

I’d be curious to know if anyone watching this movie was surprised to see aliens at the end. By then I was so bored I couldn’t imagine any other ending. Handy that a bottle of burning whiskey is all one needs to blow up a bio-tech alien spaceship.

I know that’s a lot of comments about what this movie could have been, but this isn’t a plea to see a different movie. It’s a plea to see the movie this one thinks it is.