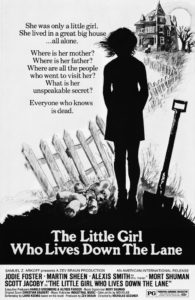 For a movie with few characters, little action, and a story that’s almost nonexistent, The Little Girl Who Lives Down The Lane (’76) is totally bananas. It stars Jodie Foster as Rynn, age thirteen, who’s recently moved to a small town in Maine with her father. But where’s her father? The movie opens with Rynn lighting candles on her birthday cake, alone in her living room. The doorbell rings. She lights a cigarette, blows smoke around the room, and lets in Frank Hallet (Martin Sheen), out trick-or-treating with his two little kids on Halloween.

So we know immediately her father, a famous poet, isn’t around, and when she tells Frank he’s working in his office and can’t be disturbed, what are we supposed to think but that he’s dead?

Frank, meanwhile, is the creepiest pedo creeper you’ve ever seen. Martin Sheen has never been oilier. Dad’s in the office? Good enough for Frank, who strokes Rynn’s hair and all but feels her up before, saving the day, his two costumed kids turn up. 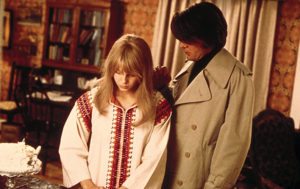 Foster is a preternaturally good kid actor. She plays Rynn as a brilliant loner, home-schooled by her father, taught to trust no one. She believes it’s her against the world. Her mother took off when she was three. She was raised in London. She holds her own against every adult she comes up against, yet she’s still a child. A child you’d better not mess with.

Frank’s mother, Mrs. Hallet (Alexis Smith), leased the house to Rynn’s father. She storms in whenever she pleases, demanding to see him. He’s away in New York, says Rynn, or he’s locked in his office translating Russian poetry, or he’s upstairs, asleep. Mrs. Hallet is played as evil incarnate, imperious, pretentious, and mean. She demands to collect some jars from the basement, forces her way down—and sees something shocking. 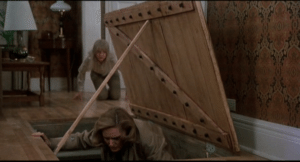 I wouldn’t go down there if I were you…

Drama ensues of a rather surprising sort. It’s handled by director Nicholas Gessner rather oddly. There’s a sense of scenes missing, or of reactions not shot. It’s not easy to go into detail without spoiling the very small story. The opening scene captures some of this. The way Frank barges in and goes full-on pedo creeper doesn’t quite play realistically. Rynn and her father have lived there for months. Frank’s mother leased them the house. Surely they’ve all met before? It’s like the scene plays both as the first time Frank and Rynn have met and as the culmination of having known each other for months—but not simultaneously. It’s like both of those realities are happening independently of each other. Which I realize makes very little sense described thus. It’s even less sensible on screen. You just have to go with it.

A magician comes by next, Mario (Scott Jacoby of Bad Ronald fame, a TV movie I saw as a kid that really freaked me out). He’s a high schooler with a limp. He likes Rynn and she likes him and there’s an absurdly long scene of them together, discussing such pressing matters as Mrs. Hallet’s car and Rynn’s history and pretty soon Frank shows up again and murders Rynn’s pet hamster with a fucking cigarette before throwing it (the hamster) in the fire. Which is played as totally horrible and, yet, also as just the sort of thing mean men do to little girls’ pet hamsters. Rynn is simultaneously upset and unfazed.

Rynn and Mario, after a day of yard work in the icy cold rain, curl up together and, presumably, have sex. It was the ‘70s, so a thirteen-year-old girl instigating positive sexual experiences with a high school boy doesn’t faze anyone. Even the town cop, Mario’s uncle, is cool with it. In a later scene, the two kids jump in bed again, only this time Rynn strips down naked first. Which is pretty much all on-screen. Sure, she’s quick about it, but she’s revealingly naked. A quick IMDB check later and, yep, Foster is just as old as her character, thirteen. Not the sort of scene likely to play today. I’m not sure it’s the sort of scene likely to play in ’76, but here we are. Or, rather, there we were.

The movie builds to a sort-of climax, a final confrontation with Frank, once again barging into the house uninvited. Something’s up with his mother, Rynn’s in on it, and Frank’s got it all figured out, more or less. Thanks to blackmail, he can finally get it on with a child! Hooray! Only Frank doesn’t know who he’s dealing with. 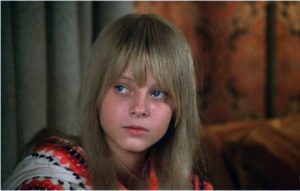 Who are we dealing with? What the hell is this movie about? Nothing is resolved at the end. There’s no telling what’s going to happen to Rynn next, or what needs to happen, or what we want to happen. She’s the protagonist, she’s a smart young girl, we’re on her side, and yet—she seems to have rather definitive notions of how best to deal with life’s problems I can’t see serving her well in the future. Is this, then, a monster movie in disguise? Is Rynn the monster?

She was born on Halloween, after all.

The Little Girl Who Lives Down The Lane is perhaps rightfully obscure. It is, truly, an oddity. I don’t quite understand why it exists, but I think I liked it.