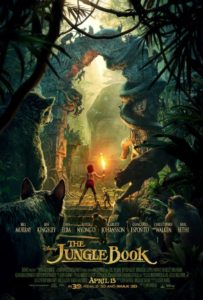 You might look at me like I am some sort of gibbering, drool cup encumbered idiot if I told you that Disney’s latest version of The Jungle Book isn’t a true story. It is, after all, a story about Mowgli, the man-cub, who was raised by wolves, a panther, and a singing sun bear in the Indian jungle.

Thing is: this version — unlike the 1967 hand-drawn animated, musical take — is one of Disney’s “live-action” films. It follows on the heels of live-action reimaginings including Maleficent and Cinderella and precedes a string of so many other planned live-action remakes you’ll wonder when they’re just going to make a live-action version of Winnie the Pooh so they can terrify all of world’s remaining children at once. 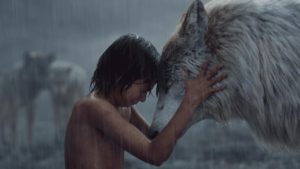 Here, with The Jungle Book, live-action is most definitely a misnomer. Outside of Neel Sethi’s performance as Mowgli, everything — characters, settings, atmosphere — is CGI. To call The Jungle Book live-action is akin to calling Optimus Prime a Juliard-trained actor. The film, directed by Jon Favreau, utilizes the industry’s tricksiest tricks to convert motion-capture, photorealistic rendering, and more into something you might mistake for true. Or real, if there’s a difference to the average schoolchild.

This is a horrible, dreadful mistake. It shoehorns Rudyard Kipling’s fables into a world of physics, biology, and logic — a world into which none of these stories belong. 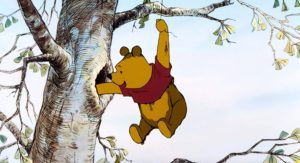 Imagine, for a moment, if you saw a real bear, wearing a shirt, covered in mud and hanging from a balloon singing a little song so he might steal some honey. It would not be endearing; it would be nightmarish. Or, at the very least, it would be unsalvageably stupid.

This is the problem with The Jungle Book. Stories that make sense as fables and that call upon our imaginations do not slip so easy into the real world. Sethi is fine as Mowgli, but Mowgli is no more a real boy than Pinocchio. He speaks to animals in a generic American accent that would sound better explaining the appeal of Taylor Swift. He grew up among wolves, but has no awareness of the dangers of the jungle. He knows the craftiness of man but has no memory of ever seeing one in this unreal real world. 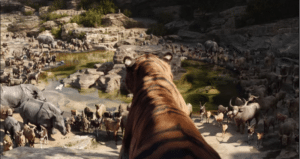 Nobody invited the flies, I guess?

In Kipling’s tales, the tiger Shere Khan (voiced by Idris Elba) wants Mowgli dead. He knows Mowgli will grow to be a man and, so doing, become dangerous. Mowgli is guided by the panther Bagheera (Sir Ben Kingsley) back to the village of men so he might avoid Shere Khan’s justice.

But in Disney’s “live-action” version, Shere Khan is right. Mowgli — not a storybook character, or a cartoon, but a boy — is dangerous. He proves this without a shadow of a doubt by the film’s end, having time and again ignored advice or common sense to put himself, his friends, and the entire jungle at grave risk. He grows to be a man and more’s the pity.

They should have eaten him. I would have.

I mean, if I was a tiger I would have. Or a bear. Or a wolf. Or really hungry.

These problems, they exist in the source material, but this treatment of that material makes them glow as if, well, they were on fire. Which they are. 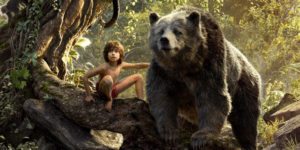 The Jungle Book‘s adventures unspool, knocking Mowgli against characters that likewise gain nothing by their realistic appearance. Scarlett Johansson plays Kaa, a giant python, for a bewildering moment. Bill Murray galumphs around as Baloo, the sun bear. The late Garry Shandling, Lupita Nyong’o, Giancarlo Esposito, and even Sam Raimi voice animal characters of varying interest, and then Christopher Walken shows up as King Louie to be as amusing as the film gets. These characters all speak to Mowgli, but the monkeys? No. They have no language, the rules on who gets to talk being as clear as anything else in a century old collection of fables never meant to be acted out.

The Jungle Book was meant to be considered, by children, deep in their minds. It took place in a vast jungle, filled with mystery. A jungle in which seeing fur move realistically would be resolutely terrifying. 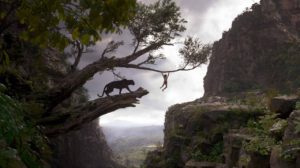 While I had heard plaudits about the effects in The Jungle Book, they never stole me from my seat; and I’m no jaded technophile. Too polished creatures glimmered over backgrounds in a way that made me uneasy. Water and fire and hair — all cheaply acquired on the open market in physical form — didn’t seal the deal. In The Good Dinosaur, we saw how the best modern effects can transform bits into a world that cartoonish creatures might believably inhabit.

When those creatures are real, or as close to real as can be created, the uncanny valley presents as a series of washboard ruts on a road traveled too fast.

The Jungle Book stole from me the privilege of imagination. It did so in the name of bringing these tales into our world, but they plain don’t belong here. And we don’t belong here, either.

We are man-cubs and we are dangerous.

Wittingly or unwittingly, we bring destruction with us. And, of course, sequels.