With my brain addled and befuzzed by a vague illness on Friday, I allowed myself to see, within a few scant hours of one another, the newly released movies Elysium and The Canyons, a double feature I’m here to tell you is the worst of all time, and this from a man (me) who once saw Willow and Rambo III in the same multiplex the week those two affronts to all things good in the universe opened. 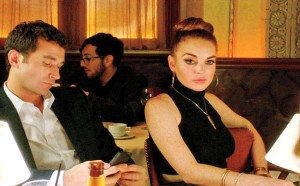 The Canyons, on the other hand, is a damning indictment of today’s film industry starring Matt Damon as an emotionless ex-car thief who, after a scuffle with the robot-police, meets his one-time child love, played by a spunky Lindsey Lohan, and, despite his ongoing relationship with Lohan’s boyfriend, begins an affair with her once he promises to cast said boyfriend in a movie being produced by Kruger, an illegal government agent played by Distrcit 9 star Sharlto Copley, who is himself sexually involved with young stud Ryan (William Fichtner, playing against type), a young man who may or may not be gay, and who not uncoincidentally has just downloaded the entire code for Brett Easton Ellis’s literary output into his brain. 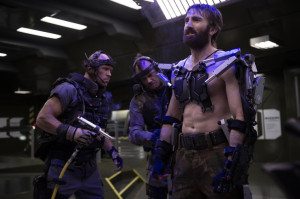 Suffice to say, it was a confusing afternoon/evening at the movies. Questions abounded. For example, if Jodie Foster’s in hot water with President Paul Schrader over blowing up poor Mexicans, how otherwise to stop Elsyium from being overrun? Speaking of Foster, I get that she’s playing one of the Lindsay Lohans, but her accent is nevertheless mysterious. What does she imagine she sounds like? And why do the bad guys care about Lindsay Lohan once they’ve gotten their hands on Matt Damon? Wasn’t her goal to get to Elysium anyway? And what’s with the sparkly laser show in the bedroom during the orgy?

Director Neil Blomkamp, bravely following up his fun and original District 9 (’09) with low-budget The Canyons, sprinkles seemingly disconnected shots of abandoned movie theaters throughout the movie, inserting them almost at random, with no overt connection to the movie itself. It’s as though he’s pruposely aping the style of Paul Schrader, whose foray into the simple-minded science fiction allegory of Elysium is quite a departure for the man who wrote, among many others, Taxi Driver (’76) and The Mosquito Coast (’85). 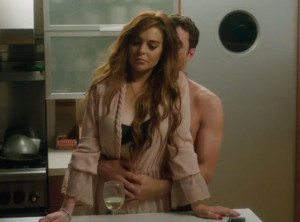 The Canyons is, in every way, on every level, a quiet disaster of acting, writing, editing, and directing. Is this on purpose? Is the movie, whose characters are obsessed with one day living in the rotating spacestation with others of their kind, wretched on purpose? Is the message that the film industry is dead? And that this movie, Elysium, is all we could hope to see borne from its festering, maggot-eaten corpse?

I find this unlikely. With the obvious exceptions of Brett Ratner and Kevin Smith, no filmmaker sets out to make a piece of shit loathed by all who see it. No, I think those responsible for The Canyons intended to make a sexy sci-fi adventure in which unlikely, blank-faced actors didn’t embarrass themselves, but gave performances audiences and critics alike would be talking about for years to come. And not in a Plan 9 kind of way, but in a Citizen Kane kind of way. When Matt Damon has screwed into his bones a metal exo-skeleton giving him the strength to murder his one-time yoga instructor, I doubt Brett Easton Ellis wanted us to laugh. 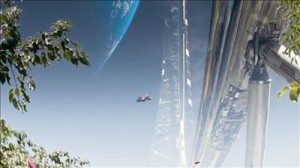 Did I laugh during the murder scene? I think I would have, but the film hung up right at the key moment. This is odd, since it was digitally projected. I’d never before seen a digitally projected movie hang up like that. At first I blamed the jitters and frozen frames on all of that ibuprofin and whiskey toying with my insides, but others in the theater appeared equally confused, and responded favorably to my cries of “Start it over from the beginning!” 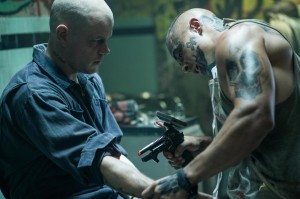 When suddenly the movie started up again (did somebody punch the hard-drive, perhaps?), we found ourselves thrust mid-action-sequence into the part where the code in Deen’s head re-boots Elysium’s entire system. All the lights go out, and suddenly there we are, poolside with Lindsay Lohan, who knows that evil-mastermind Christian knows about the affair she’s having with her ex-boyfriend and childhood friend, who’s now a doctor whose little girl is dying of lukemia. If only they could all go to Elysium and cure her!

But they can’t. The movie theaters are vacant. Their marquees blank. Tumbleweeds blowing past their decaying doors. Mildew on the seats. Without the proper tattooed ID, you will not be recognized, the movie will not start, and cancer will not be erased from your cells by the space-aged projectors.

Or so Lohan’s overly-made-up eyes seem to tell us in what may be the most moving scene of Schrader’s latest masterpiece. 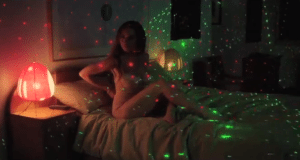 Word is that The Canyons was screened for Steven Soderbergh, who offered to re-edit the disasterous monstrosity if given the footage for a mere 72 hours. He was turned down. Would Soderbergh’s version have been better? I’m going to go out on a limb and say sweet Jesus yes, you maniacs, a thousand times yes!!! But we’ll never know for sure. 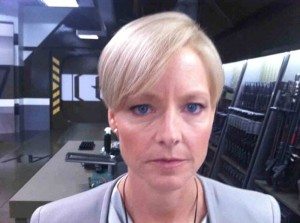 Foster does her Lohan impersonation in The Canyons

I will grant both movies this: each, in its own feeble, stunted way, appears, as best as I can make out through the haze yet filling my skull, to be trying to say something about, well, something. The death of film? Growing economic disparity? The emptiness of actors? The uncaring rich? The nobility of self-sacrifice? The resurrection of dead careers? It’s impossible to tell for sure. But I swear it’s in there, which is more than can be said for Man Of Steel or Star Trek Into Pissing Me Off or 99 percent of all the other crap even now spewing forth from our cinema screens.

I’d like to drive a UPS truck through both of these movies. I advise against viewing them, certainly back to back. Then again, watching movies with something to say fail spectacularly in saying those somethings is still a better way to spend one’s time than seeing movies intent only on parting you from your money. Isn’t it? Surely.

But if that’s so, why does my head still ache with incurable weltschmerz?

2 responses on “Worst Double Feature Ever: The Canyons And Elysium”