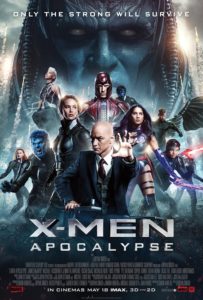 It has long been observed that my taste in movies often finds itself at odds with the world at large. Nowhere is this more true than with the past decade or so of superhero movies. Maybe I didn’t read enough comic books as a kid? I read Stray Toasters (by Bill Sienkiewicz) and Cerebus (by a man who went mad). I loved the famed ‘80s trilogy of revisionist superhero comics, Watchmen, The Dark Knight Returns, and The Flaming Carrot (pretty sure those three are always mentioned in the same breath?). But the many decades worth of comics by Marvel and DC now coming to movie screens one every couple of months? Never read ‘em. Never will. Don’t care.

Is that my problem? Because I just saw X-Men: Apocalypse, the latest in a franchise so confusing they’ve given up even pretending fealty to continuity, and you know what? It’s fine. That’s my one word review: Fine.

Meanwhile, the bulk of the interwebians out there are wondering if maybe X-Men: Apocalypse is so bad it’s worse than Batman v Superman. 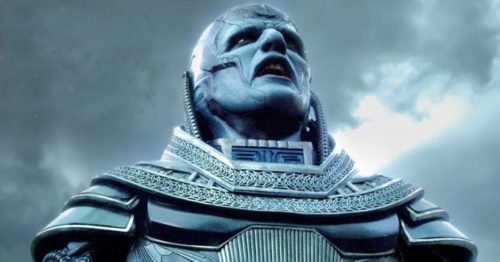 Looks Egyptian to me. They all had blue mechanical heads, right?

Over at Birth.Movies.Death, the world’s biggest Marvel fanboy, Devin Faraci, has thrown an X-Men tantrum so spittle-flecked you’d think that jerk Timmy came over after school and mishandled his action figures. Yet when it comes to incomprehensible, simple-minded disasters like Captain America: The Winter Soldier and Civil War, we are, according to fanboy logic, in the presence of cinematic genius.

I think it has something to do with the perceived seriousness with which filmmakers take their stories. Apocalypse is kinda silly, both the movie and the character. It doesn’t do things the way the comics did them (or so I am told). It isn’t blatantly a stepping stone in part of a larger, endless story. Nerdy comics reading kids of the ‘80s didn’t take kindly to people telling them comics were silly and written for kids. And they don’t take kindly now to anyone saying the same thing of their superhero movies. 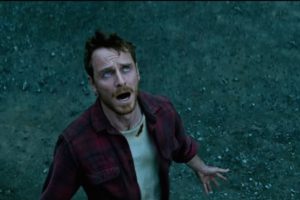 “Come to me, magnets of the world!”

Marvel understands this. Their movies don’t exist as singular events. Each one exists not as a thing unto itself but as a means of prepping viewers for the next one, which next one preps them for the next one, and so on. Each movie is a piece of a larger story designed never to end. And each piece, we are assured as it’s being assembled, is the best yet, the most important, the most earth-shattering, the most serious. But, you know, totally fun too! Just like comic books.

Bryan Singer, director of Apocalypse (and many past X-Men movies), doesn’t play this game in quite the same way. Apocalypse is set in ’83, ten years after the last X-Men flick, so whatever happened in the past movie isn’t especially important. A good thing, since I don’t remember a damn thing about it, aside from some giant robot machines running around, I think? Apocalypse stars Oscar Isaac as the titular character, introduced in a very silly prologue set in Egypt some five thousand years ago, a super-mutant who transfers his consciousness into new bodies and, if those bodies are mutants, absorbs their powers. He’s trapped under a collapsed pyramid and awakened inadvertently by pesky CIA agent MacTaggert (Rose Byrne) in the present (’83) day.

All the other mutants, meanwhile, are doing what they always do in these movies: figuring out their powers, and deciding whether or not to be nice or mean. Michael Fassbender plays Magneto, and because he’s Michael Fassbender, he gives a great performance. At least insofar as he’s allowed to, given the material. It’s a comic book movie, after all. The creepiest scenes of the movie feature Magneto hiding out in Poland, pretending to be just an average Józef, married and with an adorable daughter. When the cops come to his forest home sans metal objects, suspecting he’s evil mutant terrorist Magneto, the trouble begins. 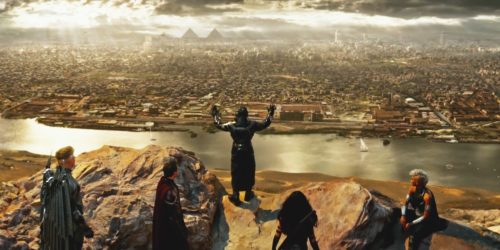 The Blue Man Group prepares to take over the world

One thing Apocalypse has going for it is simplicity. The resurrected super-mutant deems human civilization a mess and ripe for a death and rebirth, and, slowly but surely, other mutants search each other out, team up, and whip his ass. Is this too simple? For Marvel fans, it sure is. Where are the multitude of subplots? Where are the special character intros designed to lead into tangential sequels? Where is the lip-service paid to “character arcs”? Where are the callbacks and foreshadowings to past and future movies? Nowhere to be found. Apocalypse may not be a very original movie, but it is a movie, with a beginning, a middle, and an end.

It’s got a theme, too: You can’t do it alone. All those mutant characters? They fit, thematically. They need to learn to work together, or else their powers and lives are meaningless. If I could remember literally anything that happened in any previous X-Men movie, maybe I’d remember that this is always the theme. But so what? It is what it is, and for the purposes of this movie, that’s what’s set up, and that’s what plays out. Even evil Apocalypse feels the need to gather “four horsemen” around him, exactly why I can’t say, he seems rather all-powerful and hardly in need of assistance, but in terms of theme, sure, he too needs support from other mutants. He loses the grand battle at the end only when his former allies turn against him.

Might we complain that many of the mutants don’t have much to do until the finale? We might, but why waste the energy? They muck about finding each other and finding themselves. That’s what the movie’s about. 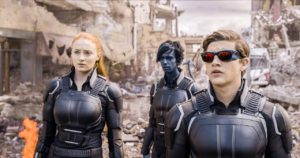 Of these other mutants, aside from Magneto, the most entertaining are Nightcrawler (Kodi Smit-McPhee), a teleporting creepy blue lizard kid with a German accent who just wants to make friends (at one point laser-eyes kid, Cyclops, takes Nightcrawler to the mall—and, in the movie’s biggest lost opportunity, we don’t get to see them buying shoes and hitting on high school girls (my favorite potential X-Men spin-off is that exact movie: Young Nightcrawler Hangs Out At The Mall)), and Quicksilver (Evan Peters), who gets the best scene in the movie, wherein he saves the children of Xavier’s school from a fiery death as the building blows up at crazy high speed. (Did he have the one fun scene in the last X-Men movie? I think I recall that.) And of course, as required by the law of all things X-Men, Wolverine shows up briefly to be angry and kill a bunch of jerky army jerks.

X-Men: Apocalypse, like any of these movies, has to be graded on a curve. A very big, very curvy curve. It struck me as reasonably diverting, as far as these things go, unlike Batman v Superman, which bored me into a coma, and unlike most of the Marvel movies, likewise full of dull, confusing action sequences and laughable self-seriousness. It’s simplistic and silly—I mean just look at Oscar Isaac’s make-up, it’s ridiculous—but it’s a superhero movie. It supposed to be. 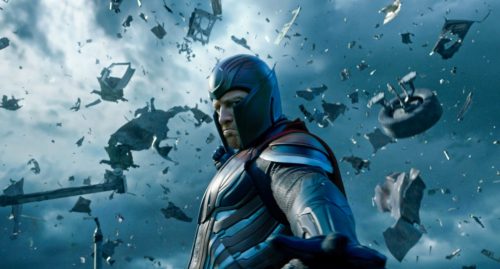 Magnet Man does the swirly thing he does

Maybe this is what it comes down to. Marvel movies are dumb, bland, and silly—but they pretend to be serious and profound. Fans get to have it both ways. The studio and filmmakers and likeminded reviewers assure them these movies are mining deep themes, while in fact they’re a swirl of manic, senseless comic book mayhem with snarky superheroes cracking wise. Whereas in the DC universe the movies are billed as serious and dark but, crucially, are actually grim and bleak and hopelessly serious and dark. And who wants a bleak comic book movie?

X-Men: Apocalypse is like a Marvel movie without pretensions of importance. It’s a silly comic book flick. It’s fine.

2 responses on “X-Men: Apocalypse, And Embracing The Stupid”