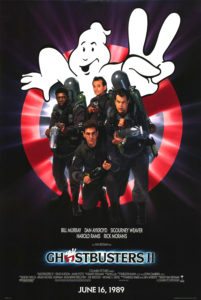 Is there a new Ghostbusters movie coming out? I feel like there’s been a tiny bit of press on the matter of late. While we wait to find out if such improbable rumors are true—I think there might be a female Ghostbuster this time?—I decided to do what few have dared of late: rewatch Ghostbusters II, which I haven’t seen for a good 25 years or so.

It is without exception agreed among intelligent, tasteful, attractive, witty, deep, open-minded, fun-loving, insightful, perspicacious, mordant, comic, valiant, noetic, equable, mellifluously-voiced, and well-coiffed lovers of film that Ghostbusters is one of the finest films yet produced by humankind. Its sequel, released five years later, in ’89, was less lovingly received, and has since then grown in stature not at all. It’s not so much hated as ignored, as though by pretending it doesn’t exist, it won’t. Murray and Aykroyd and Ramis have all in different ways over the years more or less apologized for it.

Does it deserve its opprobrium?

Yes and no. Somewhere deep within its DNA lives an inventive, funny movie. Aykroyd and Ramis are clever writers. The Ghostbusters having run themselves out of business is a good premise, so too all the bad vibes of New Yorkers fueling the return of dark ages tyrant Vigo The Carpathian, and using the Statue of Liberty to win the fight? Inspired if not a bit obvious (Stay-Puft was big! What else is big?). The problem is that none of these ideas are developed beyond their mere existence. The story doesn’t grow naturally. Instead it becomes a framework for the same characters to find themselves in the same situations with the same results. 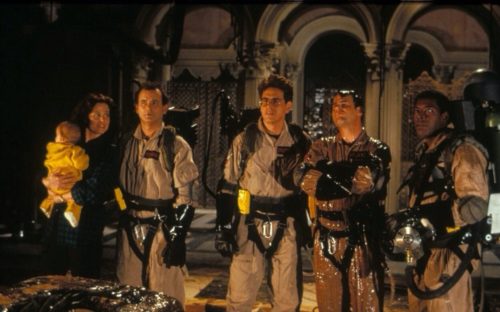 The Ghostbusters themselves are still fun to hang out with. My favorite line: when Egon says his parents didn’t believe in toys, Ray asks, you didn’t even have a Slinky? and Egon replies, “We had part of a Slinky. But I straightened it.” Funny lines crop up throughout. The movie doesn’t lack wit, it just doesn’t know what to do with it.

So we get Peter MacNicol’s absurdly accented art restorer, Janosz Poha, a marvelous comic creation who winds up as a half-hearted attempt at recreating the Louis plotline from Ghostbusters. He’s meaningless to the story. He sure is funny, though. Let’s enjoy this scene of him shaking hands with Venkman:

The same fate awaits the Statue of Liberty. She shows up late in the movie, almost too late to save it from overwhelming boredom. The time taken to bring her to life is tedious at best, but once she’s walking into the city, who knows what will happen? Will Vigo come to massive life? Will an epic throwdown à la Godzilla v. Rodan lay waste to the city? Who wouldn’t want to see the Statue of Liberty rampaging through New York in the name of defeating pure evil? Alas, no one who made this movie. Instead the Statue delivers our heroes to the museum, deposits them within, and is never seen again. Actually she is seen again, in the final shot of New York, standing where she always stands. Would a pan up revealing an empty pedestal and the good lady climbing back up on it have been better? Yes. As would any of a million other Lady Liberty gags you could imagine. Every funny thing is funnier than no funny thing.

The final fight against Vigo is dull and flat and without any sense of danger or excitement. The Ghostbusters barely even do anything aside from shooting him with their proton packs, which I realize is what you do to ghosts, but couldn’t they have thought of anything new? Nope. Then again, there’s the painting. Once the portrait of a glowering Vigo, now it’s, well, whatever the fuck this is: 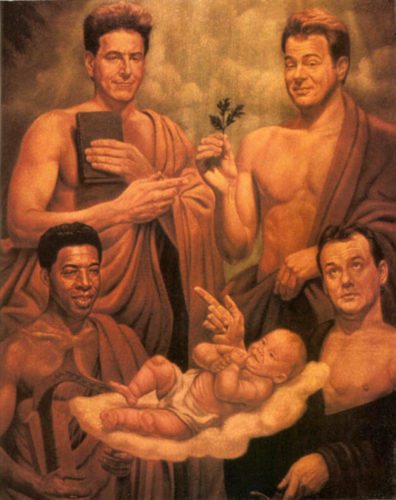 By the time the finale lumbers to life the movie has devolved into a dull recitation of identical scenes from Ghostbusters. The gang is locked up—not in prison, in an insane asylum (hey there, Brian Doyle-Murray!)—the city is swamped with ghost sightings, the Mayor is outraged, and the Ghostbuster’s bureaucratic foil, this time played by the ill-used Kurt Fuller, a marvelous actor, yes, but with no hope of comparing well to William Atherton’s career-defining performance as a man with no dick, sweats and makes faces. What to do?

Gee, I don’t know. Maybe get those guys who saved the city from a giant, killer marshmallow man?

I mean I like the concept that a mere five years later, everyone’s kind of forgotten what the Ghostbusters did, and passed laws to keep them from destroying any more city property, but come on. The Mayor too? Did the city just imagine their prior ghost infestation? The demon dogs? The exploding central park west building? The portal to another dimension? Multiple city blocks covered in hot marshmallow? It’s all rather forced. Which it has to be to remake the first movie scene for scene.

A couple of the ghost encounters work well in the first half. The courtroom scene is pleasantly goofy, and the electric chair ghosts make for the only threatening spirits in the whole movie. Winston’s encounter with the subterranean ghost train is likewise kind of spooky and fun. It’s too bad Winston (Ernie Hudson) doesn’t get any more screentime in the sequel than he does in the first movie. A lost opportunity.

Louis (Rick Moranis) and Janine (Annie Potts) are back with even less to do but make out with each other. At least Louis gets to play a lawyer in the courtroom for some laughs.

Then there’s Dana (Sigourney Weaver) with her baby. Babies in sequels are the equivalant of sit-com wedding episodes. You know you’ve reached the end of the line, comedy-wise. And say, a slightly contentious romance worked in the first one, how to recreate it in part II? Open with the two estranged, and we’re back to square one! Bingo!

And yet—after all that, I kind of enjoyed Ghostbusters II for the first hour or so. It’s dopey and lazy, sure, but kinda funny too. The fellas are charming and Egon has a funny line about a puppy. Only as the movie hauls it’s fat ass into plot-mode for the final third and turns into a carbon copy of its predecessor does it grow depressing and dull. One can see why Murray was loathe to revisit it again in a part III. He knew it was unwise to mess with perfection once. Twice would have made him out a fool.

Should this alleged new Ghostbusters remake actually exist—I can’t seem to find anything about it on the internet—I suppose I’ll check it out and report back on who the fool is this time around. I sure hope it’s not me.