Despite what you have been told, you can account for taste.

One of the key factors — when you’re totting up taste figures, doing your taste accounting — is exposure. Not a ‘have you gone streaking lately’ exposure or ‘are you Bear Grylls’ exposure, but ‘what have you seen’ exposure. What have you been exposed to? 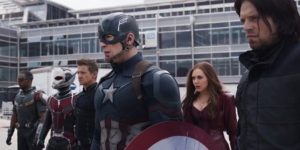 You can be gruntled just as easily as you can be disgruntled. I looked it up.

And if most of what you’ve seen lately has been superhero movies you could be forgiven if you really enjoyed Captain America: Civil War, which is as exciting, innovative, provocative, and intelligent as a glass full of wet plaster dust.

It’s like this: you decide to get married. Congratulations! So you go about the business of planning your wedding, which is so much fun, you should really try it. And, as part of this process, you go taste some cakes. 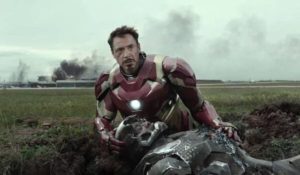 You visit a couple of bakers all of whom present you with small pieces of cake in a half-dozen different varieties. You eat them, this cake (not the bakers, probably), and even though many of them taste not so very good you go “mmm mmm cake” and “thank you very much” and “let me discuss this with my fiance(e) when you, the somewhat creepy baker, are not so much in earshot because your cake is not so very good.”

Then, after trying a mess of these cakelets at a bunch of different places, you find one that is good! Hooray! Good cake! And you dance around and start fires and pluck all your body hair and tell everyone on the street how fucking good this cake is. It is good fucking cake, do you hear?! EAT THE CAKE!!!!

It is more or less the same with Captain America: Civil War, except they don’t charge you double if you try to buy a ticket for that movie and they find out you’re getting married.

Do you see what I’m saying? I’m saying yeah, sure. If you binge watch Daredevil you might call one episode much better than the others, but you’ve forgotten to account for your taste.

And your taste sucks because you decided to binge watch Daredevil.

My superpower is surviving this sausage fest.

Captain America: Civil War is a barrel full of rabid monkeys. It’s got jokes and romance and pathos and action and this really weird musical number where the Winter Soldier (Art Carney) serenades the Black Widow (Abe Vigoda) on the squeeze box. They take all this stuff — stuff you like, because you like superhero movies in the same way that that guy living under the mailbox loves heroin, and I mean EXACTLY THE SAME WAY — and cram it in there like it’s Joey Chestnut and wouldn’t you like to eat just one more hot dog than you did last time you tried this?

What if we dipped it in heroin? Just a little?

I’m kidding, of course. You can’t have any of my heroin-dipped hot dogs.

Marvel / Disney / Globo-Chem has really done it. They’ve made movies into TV to fight back against how TV has made TV into movies. Now, you have to see all of these films so you can pretend you understand what’s going on in them as if it matters in the slightest. So you can pretend you have an emotional investment in Captain America (Azimuth T. Schwitters) or Iron Man (Pit Pat) and who will win their climactic battle against being upstaged by Thor (not pictured).

Do I have to write more of this? Fine. The story of Captain America: Civil War is the story of dysfunctional families everywhere. Mom and Dad get into a fight about something which they both care very strongly (you, being a failure, most likely) because they’re just sick of each other and need to fight about something. Everyone picks sides and bludgeons each other at the Berlin airport except for Uncle Vision (Graham Chapman), who could waste everyone whenever he wanted to and just sort of hovers about, non-committally, until it’s time for him to say something so cruel no one will ever get over it.

Probably it’s about you being a failure.

Do not light your superfarts.

Then, god, everyone goes to sulk in their rooms until Mom and Dad decide to get divorced just as soon as one of them can afford a lawyer or sobers up or finds her goddamned car keys. Even when it turns out the whole argument was the result of a misunderstanding purposefully caused by some non-super super villain whom you’re never quite sure who the fuck he is and if his problems are his own fault, or who’s that other guy, and Spiderman (George W. Bush) is in this one? Hooray!

I give it five stars. It was the best one of these movies yet. I cannot wait for Supreme Being’s review of X-Men Apocalypse, which film it is clearly his turn to see. Now, if you’ll excuse me, I need to wash this cake down with a nice glass of wet plaster dust.

7 responses on “Captain America: Civil War and the Marvel of Your Mind”