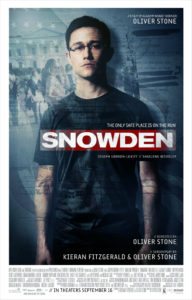 Oliver Stone’s Snowden is, strange to say, not a bad movie. Strange because I tend to find most of Oliver Stone’s movies bad, in one way or another, or often in all kinds of ways at once. But then I’m known for not enjoying the feeling of a director beating me over the head with a two-by-four. As this is Oliver Stone’s primary method of story-telling, we don’t often get along.

To continue with the full disclosures, in the matter of the real-life Edward Snowden, I find his actions to be entirely commendable. Arguments that he somehow compromised the security of the U.S., made, usually, by those in the employ of the U.S. government, are thin at best, and are at worst naked ploys to maintain and increase the U.S.’s power through, ideally, total surveillance and, thus, total control of every person on earth, if we take matters to their logical conclusion. Snowden didn’t stop any of this, of course, he simply brought to light what we all expected/feared/tried as best we could to ignore about our government. With any luck, he’s both slowed down the inevitable and inspired others to speak out in the face of government secrecy and criminality.

Is Snowden a hero? I have trouble with the word. He is a man of conscience. That’s enough. It’s this kind of person we need many more of in government. Many, many more. 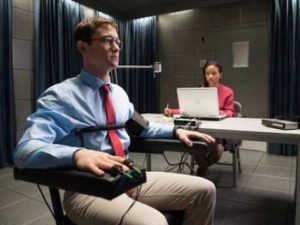 Testing for the CIA

Stone I think would have less reticence using the word “hero.” Not necessarily a bad thing, but this is Stone we’re talking about, and though, miraculously, his mighty two-by-four is nowhere to be seen for most of Snowden, he can’t help but bust it out toward the end, and go about beating us over the head with it. Thus Snowden, like everything Stone directs, would have been more powerful without all the shouting.

If you’ve seen Laura Poitras’s documentary on Snowden, Citizenfour, you know the basics (if you haven’t, what are you waiting for?). You know Snowden worked as a contractor for the CIA and NSA, saw and was appalled by the government’s mass collection of data on U.S. citizens and people around the world, stole a heap of classified documents, and flew to Hong Kong. You know he holed up in a hotel until talking to Poitras, journalist Glenn Greenwald, and reporter for the Guardian, Ewen MacAskill, giving them the documents and letting them publish as they saw fit. And you know he tried to find asylum in Ecuador, but was held up in Moscow when the U.S. cancelled his passport, where he remains to this day. 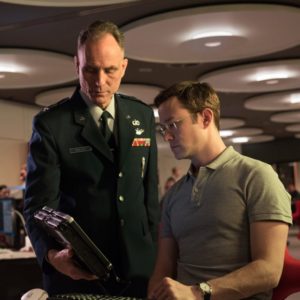 You fool, don’t show him anything!

Stone uses the Hong Kong hotel room scenes we know from Citizenfour as the framing device to go into what we don’t know: Edward Snowden’s life pre-Hong Kong. Joseph Gordon-Levitt plays Snowden pretty close to the way Snowden appears in real life: a computer nerd presenting very little in the way of emotional affect. As a character, this works out well, I think especially because this is an Oliver Stone movie, and here, for the first time, he has a lead who isn’t all bluster and volume and emotion. Because Snowden the character is who he is, it forces Stone to sit on his two-by-four for much of the running time.

Snowden’s life isn’t exactly a thrill ride, but Stone throws in enough info about the surveillance state to keep things interesting. Snowden’s slow realization of who he’s working for and what he’s accomplishing is really just an excuse to educate viewers on the reality of the CIA and NSA and how they collect and use information. Some snappy visuals add spice, and there’s a feeling of tension throughout. There are no spies running around with guns, but there’s a feeling Snowden could be taken out at any minute for what he knows and what he plans to do. The story only drags when Snowden’s girlfriend, Lindsay (Shailene Woodley), is on-screen. Woodley is fine, and Stone needs her to help humanize Snowden, but there’s just too much of it. Who cares about their relationship issues?

The performances are solid all around, with Zachary Quinto and Melissa Leo doing dead-on impersonations of Greenwald and Poitras. Plus Nicolas Cage shows up as a grumbly old cryptanalysist. Can’t argue with that. Most movies could use a grumbly old Nic Cage in them.

“Sorry dear, my pants are classified.”

If you’re looking for a nuanced discussion of whether or not Snowden’s actions are heroic or traitorous, you won’t find it in Snowden. I see writers taking Stone to task for failing to present the arguments against what Snowden did. But this isn’t a failure, as such. Stone takes for granted that Snowden did the right thing. Making a movie dealing with both sides of the issue might have made for a better movie, but it would have been an entirely different one. It’s not the movie Stone made or intended to make. Snowden is the story of a man who saw something obviously wrong and did something about it.

Or at least it should have been. Stone can’t help being Stone, so the final ten or fifteen minutes feature soaring, heroic music and the elevation of Snowden to hero. It’s too bad. Stone really didn’t need all the bluster. Just showing this boring, regular guy doing something this ballsy and important in the most mundane way possible would have had far greater impact.