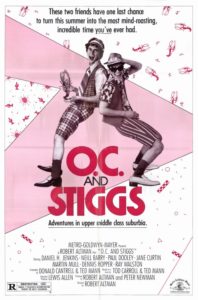 Few people have watched Robert Altman’s ’85 teen comedy, O.C. and Stiggs. Almost no one did in ’85. MGM sat on it for a couple of years, then half-heartedly released it in ’87. It is the oddest of odd duck movies. Picture a duck with a machine gun, flying a helicopter, and the duck is Dennis Hopper, and he’s waging war against ‘80s capitalism in the Arizona desert with a couple of obnoxious teenagers. For a start.

The movie is ostensibly based on stories from the National Lampoon magazine about a pair of anarchistic teens, though the movie versions of the characters are something very different. Or so I have read. Altman, as you might expect, is not interested in making an ’80s teen comedy. He’s interested in stirring shit up. He’s insterested in the emptiness of Reagan’s America. He’s interested in telling damn near everyone to fuck off.

This is why I love Robert Altman. He doesn’t bite the hand that feeds him. He lops it off with a chainsaw and laughs at its owner, screaming and bleeding to death. No doubt MGM imagined a M*A*S*H-sized comedy money-maker, but, you know, ‘80s teen style, from a director whose fortunes had fallen to a low point since his ‘70s heyday, who surely wanted to play ball and make a hit. What Altman delivered is the weirdest teen comedy of the decade. It’s much too esoteric and Altmanesque to play to teens, and way too trashy to play to cineaste Altman fans. 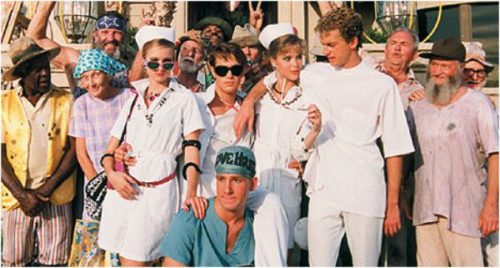 The cast, more or less, hangs out

But is it any good? Yes and no. It’s kind of terrible and kind of awesome all at once. As a fan of the weird, I quite liked it. Nothing about it should be the way it is. First of all, it’s directed by Altman, and is in every way made like an Altman film. The slow pans and zooms, the refusal to focus on any one character in any scene, the overlapping dialogue, the lack of any real plot, and of course the theme: America is an empty wasteland of dumb, capitalistic, racist assholes in need of, at the very least, outrageous mockery, if not outright war waged against them.

There is something like a story. One summer in Arizona, two teenage boys, O.C. (Daniel Jenkins) and Stiggs (Neill Barry), make it their life’s work to humiliate a certain Mr. Randall Schwab (Paul Dooley), rich insurance salesman, and his awful family. They’ve got a good reason: O.C lives with his retired cop grandfather, Gramps (Ray Walston), who’s going crazy and needs a live-in nurse. Without one, he’ll go to a home, and O.C. will be shipped off to relatives in Arkansas. His insurance would pay for it, but Schwab is in some way or another denying it. So the boys take revenge.

Their style of revenge is, in a word, weird. It’s kind of dark, yet surreal enough not to be outright evil. So they gift Schwab’s daughter with a machine gun at her wedding, invite the town’s bums to a party at Schwab’s house while he’s out, bury their dead wino friend in the middle of Schwab’s golf course, and I think some other things too? It’s all a bit vague and wandering, as is Altman’s wont. 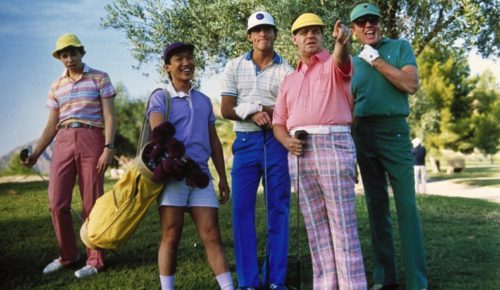 The evil Schwab and his cohorts

Meanwhile, O.C. woos Michelle, a society babe played by a young Cynthia Nixon. The highlight of their romance is an old-school Hollywood dance number with O.C. in a tux, interrupted, of course, by plenty of cutaways to a million other characters in the room. When not wooing the lovely Michelle, O.C. and Stiggs hang out with two girls referred to only as “sluts,” who play no role in anything whatsoever. The gender politics of the movie are not what one would call evolved. In a movie Altman claimed was made to upend the ‘80s teen comedy genre, one might have hoped for stronger women characters. But they are not to be found. At least in terms of comedy, we get the wonderful Jane Curtin playing Schwab’s wife as a hopeless alcoholic with ever more inventive places to stash her liquor. For example: in binoculars, on a chandelier, and in a head of cabbage.

In keeping with their outsider status, O.C. and Stiggs like a band unknown to the normal folks, and bring them to town. A punk band? An ‘80s new wave band? God no. This is an Altman film. The band is that led by African groovemeister King Sunny Adé. Why? Because Altman liked him. And I suppose because what could seem more out of place in a wealthy Arizona suburb? They play a hot song, much to the shock of Schwab and his ilk, while the hip characters dance.

Stiggs chats with the vet

Even detractors of the movie—i.e. almost everyone—note the great, weird cast and the quality performances. Others who show up are Martin Mull, Mario van Peebles, Bob Uecker, Jon Cryer, Tina Louise, and Dennis Hopper. Hopper plays a Vietnam vet who’s introduced wearing a camera around his neck to the strains of the Doors’ “The End.” Later, when he breaks out the helicopter for the attack on Schwab’s house, it’s flown to the “The Ride of The Valkyries.” So I don’t know, is this all just an Apocalypse Now gag? Or does Altman hate that movie? It’s as out of place—or, then again, perfectly fitting—as everything else in the movie.

O.C. and Stiggs gets weirder the more I think about it. It’s really a movie made for the smallest possible audience: people who love art films by auteur directors who also love the trashiest of ’80 trash. At the time, in ’85, this must have included maybe three people on earth. We didn’t yet have the distance from the ‘80s to really sink in to a deep appreciation of its trash, and if you were appreciating its trash at the time, there’s no way you were older than 14, and if you were a trashy-movie-loving 14-year-old in ’85, how likely was it you were also into arty ’70s directors making statements about capitalism, racism, and soul-sucking suburbia?

Which is all to say, O.C. and Stiggs is an ideal Stand By For Mind Control movie. It’s a movie for people who don’t need movies to fit a certain genre, to be high art or low art, to make a lick of sense. It’s for people who want to see movies they haven’t seen before made by filmmakers who don’t give a fuck what anyone thinks. It is by no means a great movie. I don’t even know if it’s a good movie. But I know I liked watching it. I’ve seen a lot–A LOT–of ’80s teen comedies, from the trashiest to the most popular. I don’t think there’s one stranger than O.C. and Stiggs. 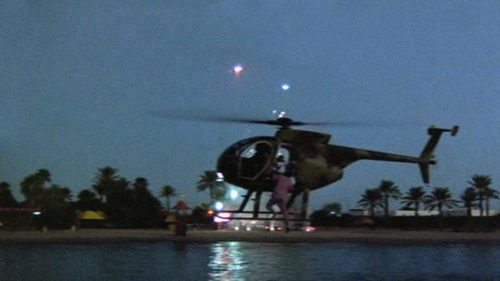 4 responses on “O.C. And Stiggs: The Strange World of A Trashy ‘80s Teen Comedy As Directed By Robert Altman”