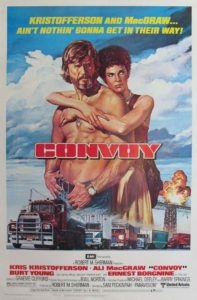 In the glory days of yore, i.e. the ‘70s, good ol’ boys and race car drivers and monster trucks and moonshine smugglers and big-rig truckers were a movie genre all their own. Who can forget such storied classics as Every Which Way But Loose, Smokey and The Bandit, Breaker! Breaker!, White Lightning and its terrible, terrible sequel, Gator, and everyone’s favorite TV show, B.J. and The Bear? No one, that’s who. We spend our days pining for such mighty classics, and our nights dreaming of their return.

One thing those clips don’t reveal, seen in their tiny, poor resolution YouTube form, are the surprising number of nice shots in Convoy. Why, you ask, would a trucker movie based on a novelty song have even a single well-framed, well-lit shot? Simple: Because it’s directed by Sam Peckinpah.

Not only that, Convoy is Peckinpah’s biggest financial success. I don’t know exactly what this says about the American movie-going public, but I’m pretty sure it means we’re all going to hell.

In fact the very reason Peckinpah, who at the time was dangerously crippled by alcohol and drug addiction, made the movie was because he needed a hit. Why movie-goers of the early ‘70s failed to see Bring Me The Head of Alfredo Garcia and Pat Garrett & Billy The Kid we’ll never know (they spent their movie-going dollars on The Towering Inferno?), but they’re to blame for what became Peckinpah’s Convoy.

Digging still deeper, Peckinpah was such a mess at the time that rumor has it much of the movie was directed by James Coburn, credited as a the second unit director.

You might think turning a song into a movie would entail the addition of material. Plot, story, character. That sort of thing. Convoy, in a daring move, contains less. Less of everything. You want the full story, listen to the song. The screenplay was written by B.W.L. Norton, who would go on to write the Tom Cruise/Shelley Long classic, Losin’ It (’83), and to direct a boatload of TV.

The story begins with three truckers, Rubber Duck (Kris Kristofferson), Pig Pen (Burt Young), and Spider Mike (Franklyn Ajaye), chatting their wacky CB chat, when who should interrupt but vile sheriff (or “bear” in CB parlance) Lyle (Ernest Borgnine). He pulls them over and threatens to ticket them for speeding unless they pay him off, the dirty son of a bitch.

The truckers go for their wallets

In the next scene, the truckers, eating lunch at a diner, beat the living daylights out of Lyle and some other cops, trash their cars, then hit the road.

That’s pretty much it. More trucks join up with them because, you know, CONVOY. It’s on! Pretty soon there’s like (checks song lyrics) eighty-five trucks, and they’re all driving, and oh man are they ever sticking it to the man!

But, like, sticking what? The governor (Seymour Cassel), running for a senate seat, tries to buddy up to Rubber Duck, makes a speech about how he’ll push for their demands in office…but what demands? There are no demands. There isn’t anything. Why are townsfolk cheering the convoy when it passes through? It’s like the movie follows the form of lovers-on-the-lam movies, where we’re rooting for the crooks because they’re crazy and in love, but doesn’t actually present anyone or anything to root for.

There’s one female character in the movie, Melissa (Ali McGraw), who has literally nothing to do with anything, aside from riding in Rubber Duck’s cab with a generally disapproving attitude. But, you know, the kind where actually she’s in love with him. I think they get together in the end? And we’re happy about it?

Some other women appear in a very strange scene where the entire convoy stops for the night and takes outdoor group showers. Try to picture that. I saw it and still don’t understand what I was watching. Maybe this is a thing at truck stops? The men are all in one shower, the women in another. Wait, where did all of these women come from? Why do they need to take a shower? To bring us a little nudity? No, all breasts are artfully blocked by arms. I remain mystified.

One scene, the opening fight in the diner, features Peckinpah’s patented slow-motion flying bodies. It works better when it’s gunslingers blasting each other with machine guns, blood flying, etc. Watching truck drivers tumble over a pool table, crush rickety chairs, and fall on the floor in intercut slo-mo is somewhat less compelling.

Part of the problem with Peckinpah helming is that he takes everything too seriously. Try to imagine a movie called Convoy that isn’t aware of what it is. That’s this movie. There’s nothing light or goofy about it. Borgnine plays Lyle the same way he plays the heavy in Empire of The North—as a sadistic bastard. Kristofferson plays Rubber Duck like a tired cowboy who just wants to ride peacefully into the sunset. It’s almost like Peckinpah wanted Convoy to suggest the same deep sadness of a way of life lost as The Wild Bunch. But what way of life? The freedom to drive a semi cross-country without speed limits? Is that the Real America he fears is vanishing?

Novelty songs turned into movies. It’s quite the genre. Last year we covered novelty-song-turned-monster-truck-movie Take This Job and Shove It. Stay tuned for sure to be thrilling future installments on such classics as Yellow Submarine, Earth Girls Are Easy, Alice’s Restaurant, and Born In East L.A., at least one of which has enough common decency to feature a Beatles soundtrack. You have been warned.

Where this movie is headed…

One response on “Convoy: Ain’t She A Beautiful Sight?”