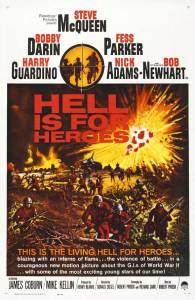 For example, sometimes what some men gotta do is hold the line against the Germans alongside only a single depleted squad of G.I.s. Other sometimes what other men are bound to do is make the best of a paltry budget, or remain locked into their poorly considered contracts, or kill the same actor playing the same German three times in the same B movie.

Sometimes, or often as it turns out, those conscripted men are in a film called Hell Is for Heroes, which is currently streaming on Netflix.

Hell Is for Heroes stars Steve McQueen (looking like reheated meatloaf), James Coburn, singer Bobby Darin, Fess Parker, and Bob Newhart (yes, that Bob Newhart). It is also directed by under-appreciated impresario Don Siegel—helmer of many of Clint Eastwood’s best, the original Invasion of the Body Snatchers, and other essentials. 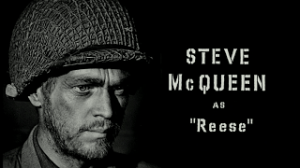 Misery loves company, but not yours.

In the name of Don Siegel, and yea, in the name of America, I watched Hell Is for Heroes. For a by-the-seat-of-the-pants production, rife with infighting and animosity, it isn’t rotten. In fact, it is considerably better than Fury—a film with which it shares a premise and a locale—as long as you don’t value cinematography, realism, artistry, or your time.

To be honest, Hell Is for Heroes doesn’t have much going for it. Steve McQueen plays a war-sick soldier, busted down to private for running over a superior officer in a stolen Jeep. It’s 1944 and the end of the European war is in sight. That doesn’t mean the Nazis aren’t still dangerous, it just means the death and destruction of war feels even more pointless.

Just like Fury, but without the obnoxious religious overtones. 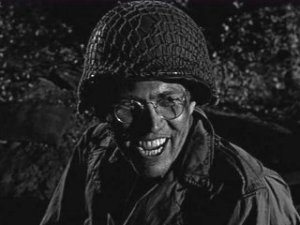 I’m James Coburn. So shut up.

McQueen’s John Reese is assigned to a unit of caricature misfits. There’s Coburn as the gearhead mechanic. Darin is the black-marketeer. Nick Adams plays a displaced Pole who wants to join up with the unit and escape to America when they ship out. In a very theatrical style, the film rolls through a few scenes that set up who’s who and more or less why.

Reese is a mess, but only because he’s afraid to go home. He’s only himself when in combat. 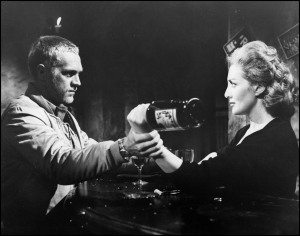 Luckily, 2nd squad isn’t going home. They’ve been moved back up to the line, but not before we get a nice scene with Reese squaring off with a duplicitous barmaid. And certainly, McQueen is good in this film. He looks haunted. He looks like he’s neither bathed nor eaten since Pearl Harbor. He also looks seriously pissed.

But that may be because he was. Everyone on the set was more or less livid at how cheap the production was (and looked). Props malfunctioned in the middle of battle scenes. The same few German soldier extras got gunned down again and again. On top of this, McQueen got sour at his agent for failing to secure his up-front fee and for convincing him to sign onto this film instead of something else. Anything else. 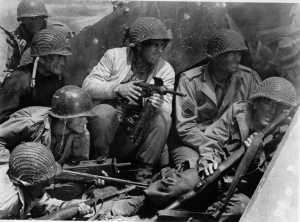 Yeah. I was in the shit.

And, if you believe a now-defunct website about Bobby Darin, which why wouldn’t you, columnist James Bacon swung through the Hell Is for Heroes set, took in the tumult, and remarked, “Steve McQueen is his own worst enemy.”

To which Darin quipped, “Not while I’m alive.”

Touché Bobby. Bobby Darin who was also pissed because his role had been the lead in earlier drafts of the script, before McQueen shoved everything around.

Anyway. The movie. Once on the line, the officers quietly pull out everyone but 2nd squad in order to reinforce an attack up north, leaving the handful of men to wake up and discover that they’re all that stands between the German army and France. Somehow they’ve got to keep the (insert wartime insulting term for Germans here, pluralized) at bay! 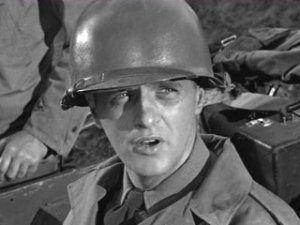 Hello. I will be Bob Newhart soon. Nice to meet you.

Again. Sounds like Fury, right? Not convinced? How about if we bring in a clerk, unused to combat, and throw him right in the thick of things? Good call. Let’s use Bob Newhart. Let’s also sneak in our naive Polish friend so he can learn first hand how deadly war is.

Oh, the humanity. Oh, the… hey wait. Didn’t we already kill that German?

Anyway. L.Q. Jones is also in this picture, but I missed him because I obviously was not paying rapt attention. Newhart reportedly kept trying to get his character killed so he could go do other things. Coburn is pretty good, but there isn’t much demanded of him or anyone else.

If Don Siegel’s name wasn’t on the tin, you would have little conception that he was involved, either. Too bad.

Then, abruptly, Hell Is for Heroes ends in a flurry of poorly choreographed action. Still, despite its staginess and cheapness, it comes through with enough good moments. McQueen is irascible and broken in a way that overcomes the film’s flaws. The story works simply, but not especially powerfully.

And if you have Netflix streaming, it won’t cost you anything extra to watch it. How’s that for a ringing endorsement?