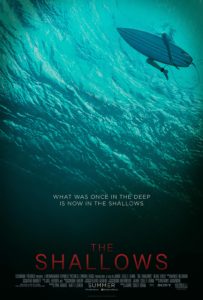 Do you think you’d enjoy watching an intelligent, professional woman being threatened by a relentless, hulking, unthinking beast? If so, you should totally check out the second presidential debate, and also maybe The Shallows.

I kid, of course. The two are not that similar. One was horrific to behold and the other has Blake Lively in a bikini fighting a CGI shark.

It is, however, an admirably convincing CGI shark. It could be president some day. It hasn’t been that abusive or said anything reprehensible in the last 12 minutes.

Right. So. Jaws this film is not, but The Shallows is just fine. To begin with, it looks exceptionally purty for a monster movie. It begins in a mysteriously unnamed part of Mexico, where Lively’s character, Nancy, has gone on a pilgrimage to find the beach her mother visited when she was pregnant with her. Her mother, alas, has died. In response, Nancy dropped out of medical school to travel, surf, and tantalize gigantic bitey fish with her leaky blood-stuffs. 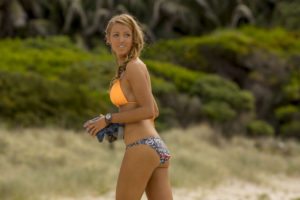 It’s not a great plan, but Flavio Labiano’s lenswork makes up for it. Lots of aerial shots of rolling waves and vibrant color and almost crystalline water formations look much better than the typical fare — which, granted, is usually an unfortunate starlet on a meathook or a severed head in a dark closet.

Why don’t serial killers ever hang out at the beach? It’s a good question. I think the sun would probably improve their moods.

Storywise, director Jaume Collet-Serra keeps things sliding forward, nudging Nancy closer and closer to sharklandia without having to actually show the shark much. It is, in this regard, a bit slow and not exactly Spielbergian. The tension is there, but — since this isn’t Jaws and Blake Lively isn’t Robert Shaw or even half of Robert Shaw bobbing in the bloodied sea — more shark would have be welcome. 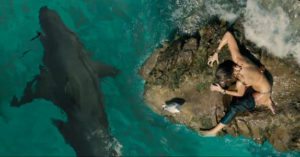 Shhh. He doesn’t see me.

Waiter? More shark, please. And all the superimposed smartphone and watch stuff? Just take it away. It’s silly. If you can’t communicate the concept of ‘high tide’ or ‘low tide’ visually, then you’re doing cinema wrong.

Do kids today understand the tides? Surely there’s an app for that.

So Nancy goes surfing, a big stinky dead whale sloshes up, and, with it, a massive fuckoff shark that is both angry and hungry and somehow convinced that Blake Lively has enough meat on her to make a meal. Attractive in a bikini? Surely, she is. Attractive on a plate with a side of sauteéd greens and some orzo? Nope. Particularly not when there’s an entire humpback whale carcass just bobbing around like half of Robert Shaw.

Farewell and adieu you ladies of Spain. 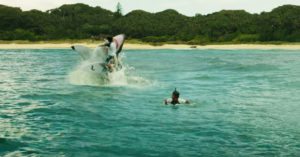 Have I got something stuck in my teeth?

Anyway. Nancy gets indelicately chewed. She finds a spot of rock in the middle of the cove to crouch upon and tries, desperately, to out-think the shark. The Shallows may not be the most intellectually rigorous film, perhaps.

Do you need to know more? There is more to know. The film is looked upon favorably for primarily focusing on Nancy v. Shark with little in the way of outward assistance or interference. Some nice tense moments crop up. The shark — in many of its scenes — looks perfect. Blake Lively received good notices for her work in the film, but I’m not going to add to them. Nothing was particularly sensible and it’s hard for me to parse performance from character-as-written when everything is “ahhh! shark!” and “alas and alack.” 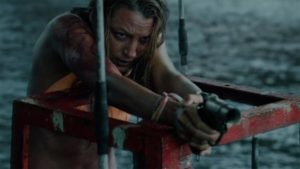 Smile you son of a bitch.

Is such a role challenging? I suppose acting as if there’s a giant shark trying to eat you would be demanding, particularly when there is no shark. Fine. Blake Lively is good in The Shallows. She certainly is substantially more than fetching (even if she wouldn’t make much of a meal). She tackles the more physical demands of the part with aplomb and doesn’t hold back when it comes to behaving as if in serious pain.

In the end, Nancy gets a bit too lucky and a bit too clever. That surely isn’t a spoiler? Everything wraps up nice and preposterously. Michael Caine doesn’t come out in a yacht with a broken bowsprit, but it’s close.

In its way, The Shallows is a sleek little B-movie style thriller. It won’t change the world or keep you out of the water, but it will probably leave you satisfied. If you’ve decided to watch a film about Blake Lively fighting off a giant shark, there’s little to be disappointed with herein.