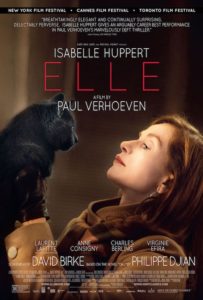 Paul Verhoeven isn’t afraid to let you know you’re watching a Paul Verhoeven movie. Elle opens on a black screen to the sounds of a couple having sex. We cut to the couple, watched by a serene cat, but it’s not quite sex they’re having. Rather, Michèle (Isabelle Huppert), is being raped on her posh dining room floor by a ski-masked intruder.

After he leaves, she cleans up the broken vases, puts herself together, and goes to work, a videogame company she runs with her best friend, Anna (Anne Consigny), to watch the latest iteration of their new game in which a sort of orc-like monster rapes a buxom lass with his many penis-tentacles.

Safe to say, I had not seen this movie before, and you haven’t either. Verhoeven has made something wholly original, a movie everyone is going to have their work cut out for them unpacking.

Whether or not Elle is a statement on the plight of women in the modern world is up to you to decide. I daren’t venture to guess. Not yet. I barely know what it is I watched. Is Michèle a terrible person? She’s mean and controlling, reducing every man in her life, possibly including her rapist (but I’m not about to give away how that storyline all goes down), to mere playthings. 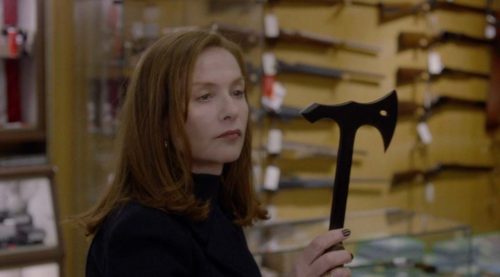 Prepping for the rapist’s next visit

She’s wickedly jealous of her ex-husband, a failed novelist. She can’t relate to her twenty-something son and loathes his pregnant girlfriend. She’s having an affair with Anna’s husband, but more or less treats him like her valet. She mocks and belittles her mother’s new, young fiancé. She might be tarred with the label “bitch,” yet it doesn’t really fit.

I think Elle presents two primary achievements to be awed by. The first is Huppert’s performance. Superlatives can’t do it justice. She does more with a raised eyebrow and the hint of a smile than most actors do with a hundred pages of dialogue. Nothing Michèle does is predictable, most of what she does feels just this side of insane, but as embodied by Huppert, her every action has a logic to it. Nothing feels out of place. I’ve never encountered this character in a movie before, let alone in real life, and still I believed her every whim, however outlandish. Michèle is the movie. She is fascinating from start to finish. 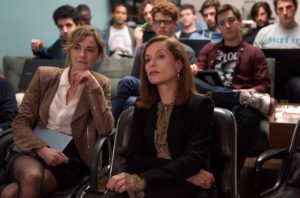 The second achievement belongs to Verhoeven and his screenwriter, David Birke, who have together fashioned a movie that defies categorization. Elle is something like a thriller. There is, after all, a rapist on the loose, who following the opening rape begins sending creepy stalker emails, and is soon spotted outside Michèle’s house and chased by her neighbor, Patrick (Laurent Lafitte). Which neighbor, naturally, Michèle goes about trying to seduce away from his hyper-religious wife.

On the other hand, Elle is something like a melodrama on the plight of the modern woman. Or a straight-up drama about owning one’s sexuality. Or a parody à la Buñuel of upper crust mores with bonus commentary on religion and the Catholic church.

At different times Elle is all of these movies, without ever being one of them. It’s the kind of trick that shouldn’t work. But here it does. As soon as you think you know where the movie’s going, it not only doesn’t go there, it makes sure you know it knows you thought it was going there, which is why it knows exactly where to go next. Even within scenes this is the case. There’s no telling what’s going to happen next. My every prediction and assumption proved wrong.

This is a rare experience. For that, I loved Elle. 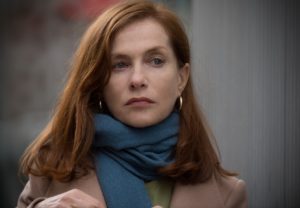 But overall, I still find myself at a loss for what to say or think about it. It’s not exactly a lovable movie. Michèle is not a lovable woman. Or is she? The way Huppert plays her, she’s mean, cold as ice, and terribly vulnerable, all at the same time. She’s struggling just like the rest of us, and with far more baggage, what with her father, in prison since she was ten, being one of France’s most notorious serial killers.

So is Elle about a woman struggling with unimaginable childhood trauma? Yes. And no. Is Michèle’s reaction to her rape and subsequent, shall we say, ownership of it a way to deal with her father? To get back at him? Or to make peace with him? Could be, could be. By movie’s end, Michèle has gained a strength and peace of mind she lacked at the start. Or has she?

I didn’t want anyone to be able to say that Michèle was so traumatized as a child by her father’s acts that it’s normal for her react to the rape that way. I wanted to escape that constrained vision of the character and her behavior. It’s a possibility but no more than that. The explanation is, simply, Michèle, in every aspect of her personality.

This sums up Elle‘s every ambiguity. It’s all Michèle. And it’s all ambiguous. Nothing she does is expected, and everything she does fits her character to a T.

Verhoeven is no maker of sedate cocktail dramas, so despite Elle being a far cry setting-wise from Starship Troopers or Showgirls, the pace feels as fast as an action movie. It veers from one unexpected scene to the next and never lets up. Even the final scene is ambiguous. It feels as upbeat as possible considering what came before it, but take note of where it’s set.

Early reviews of Elle make claim to its being Verhoeven’s best film. I can’t say they’re wrong, though I’m not yet prepared to agree (there is RoboCop to consider, no small matter). Elle is an exacting movie made with uncommon drive and purpose about a uniquely fascinating woman, and its meaning is up to the viewer to decide. I like that. Quite a lot. 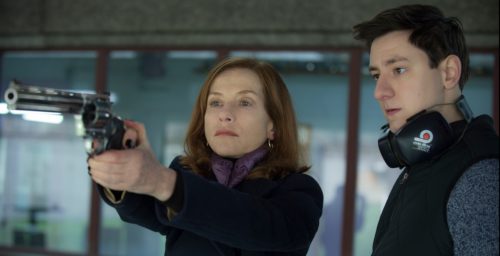