It has been a terrible week. All we dreamed in our brightest hearts came crashing down, without mercy.

Fear, for the moment, won.

And so there is no better moment in time — whatever that strange construct may be — for you to watch Denis Villeneuve‘s science-fiction elegy, Arrival. This film is about the power of fear, the strength of loss, the inevitability of pain and, despite all those things, our embrace of life. The meaning of connection; this is the truth the film tells.

I started crying before the film had barely begun and wept more after. I pulled a muscle in my shoulder simply remaining in my seat, watching and trying to breathe. Remembering the photograph my small family had taken outside our polling place on Tuesday morning last. Wondering what kind of heel I was to bring my daughter into existence here, now, with hope for her creeping through my heart like ravenous wisteria.

Art, like children, is part of the moment in which it exists; here is Arrival, right on time.

We might argue about how the film might have landed some other week, or upon someone else’s head, but what for? Here it is now, with me: a film about the overwhelming unknown and the worse things that can be seen clearly.

I have not read Ted Chiang’s The Story of Your Life, upon which Arrival is based, but I should. I have not previously cared much for Villeneuve’s films, or for Jeremy Renner, or even for Amy Adams. Science-fiction has mostly been dreadful of late, overly concerned with superheroes and giant robots and weightless, plastic things that only impress in how unimpressive they are. Even the Star Trek films, which by all rights ought to wiggle their fingers in society’s chest cavity, have failed to do so.

Arrival is something else. It is a film that takes the itchy, suffocating silences of films like Upstream Color and Under the Skin and slips them into something that plays well in cineplexes. There are moments in the picture in which you get lost in an emotional humidity and then others in which you, with rising skepticism, half expect Kaiju to do destructive battle. But the line is held. The rules are not broken, only your heart. Or at least mine.

Arrival broke my heart for good — not in the ‘for eternity’ sense, but in the ‘for the best’ sense. Although they may be one and the same. It is hard for me to say as I do not yet know how to read Heptapod.

If you have not heard tell of what Arrival reaches for, nor seen the trailer, nor the seriously awful new poster that makes it look like a remake of Armageddon, that’s great. Keep it simple. Come as you are. As briefly as possible, though: aliens arrive unheralded on Earth. Amy Adams’ Dr. Louise Banks — a linguist — is conscripted by Forest Whitaker‘s Colonel Weber to join Jeremy Renner’s Ian Donnelly, a theoretical physicist, in trying to communicate with the seven-limbed creatures. The terror, and disorientation, and yearning which is missing from most alien visitation films (we’re looking at you Independence Day) here is welded to near every scene.

Villeneuve and cinematographer Bradford Young move so slowly it makes you lean in; they peer so obliquely you crane your neck. Like Polanski in Rosemary’s Baby, they refuse to show you want you need to see until you’re well past ready. And while some useless voiceover intrudes alongside some questionable Hollywood maneuvering, there is no unforgivable foul. The core here is solid.

That core is Amy Adams and the swirling suck of life in which her character gets caught.

While I normally eschew the idea of spoilers — believing that a good film cannot be spoiled — Arrival has me questioning that stance. Perhaps the Supreme Being saw the film’s twist coming a mile off; he’s better at that than I am. I, for one, walked into the trap as blindly as you did last week’s election coverage.

So yes. Amy Adams is exceptional, working on the backs of a subdued and distant supporting cast. Jóhann Jóhannsson’s score also deserves high marks for setting the alien, disorienting mood. Imagine, if you will, the tension of Sicario laid over the spine of something so large it can only be seen from a distance and only felt from right beside its skin.

That likely makes not a whole lot of sense. I’m sorry. I’m doing my best. While the film isn’t as tendrilous as Upstream Color, nor as precise as Children of Men, nor as prescient as many others, it does remind us of who we are, when we are, and why.

These are all crucial things to know and feel. 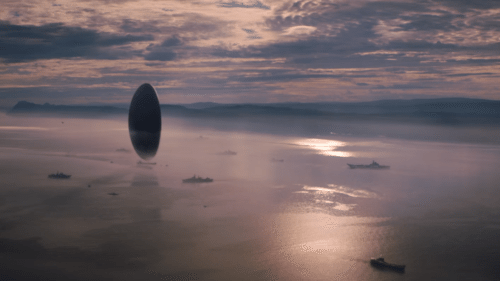 You might be tempted to forget, particularly today. Do not. You cannot. There is love here that must be offered and accepted, even though it will not change a single thing or ease a single moment of suffering.

But we have no other choice. I am glad you are here with me.

One response on “Arrival Breaks Your Heart for Good”