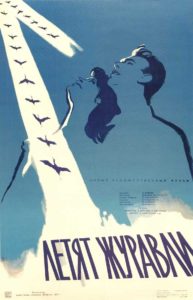 Say, I thought, The Cranes are Flying (’57), I’ve heard that name, some kind of Soviet WWII movie that won the Palme d’Or at Cannes, the only film from Russia ever to do so. Perhaps, I, in my infinite wisdom, continued thinking, it might be good.

It’s so good I knew how good it was from the first shot, of a bridge and two young Russians in love, Veronika (Tatiana Samoilova) and Boris (Aleksey Batalov), running into frame and down along it. What was it about this shot? The light, and what feels like a wider than normal lens, and above all the way the camera moves to follow the lovers. It’s all so kinetic. It’s alive.

A street cleaner drives past them, spraying water, and it’s like one half of the frame is a sparkling sky and you have no idea what you’re looking at until the truck passes. 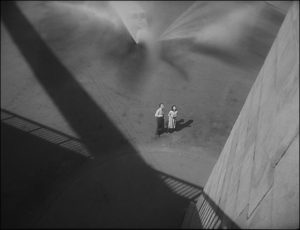 The world turns to water

And the camerawork doesn’t stop. It’s right up in the actors’ faces, it’s chasing them, or pulling away. I was immediately put in mind of another Russian film I’d watched about a decade ago, I Am Cuba (’64), the cinematography of which is stunning. I thought, was there some kind of revolution in ‘50s Soviet Cinema I’ve never heard of? Where the camera was freed to move at will, to bring cinema alive in a way few in the west could match?

The movie played on, and I couldn’t shake how much it reminded me of I Am Cuba, even though I couldn’t really remember any specific scenes from it.

Well. Long story short, The Cranes are Flying is the first of three movies directed by Mikhail Kalatazov and shot by Sergey Urusevsky. I Am Cuba is the third. Letter Never Sent (’60) is the second. Why I hadn’t followed up my I Am Cuba viewing way back when I don’t know. An unfortunate oversight.

When I put on Letter Never Sent, I thought, let’s see how entrancing the opening shot of this one is. Four people standing ankle deep in a river blanketed in glittering sunlight, and the camera is pulling away from them, it must be on a helicopter or a small plane taking off, and the view becomes wider and wider, and the people smaller and smaller, and yep, it’s entrancing, all right. It doesn’t look like anything else of its era. 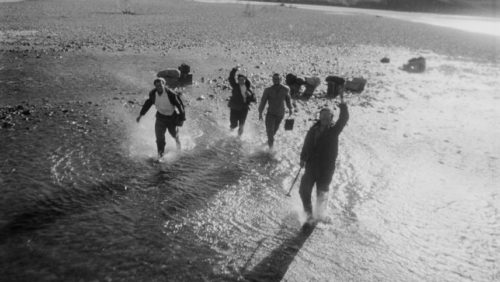 The Cranes are Flying begins just before Hitler makes his genius decision to invade Russia. Boris goes to war, but his cousin, Mark, stays home because, he claims, he’s an artist and smart, and therefore won’t be drafted. Veronika moves in with Boris’s family once hers is bombed to smithereens in the air raids. She’s happy to await Boris’s return, but Mark can’t keep himself from raping her, being the smart artist that he is. And thus, they are married. Sorry, Boris, hope things are going well at the front.

Things are not going well at the front. Not a lot of the movie takes place in battle, but it’s enough to feel the muddy, miserable hell it must have been.

The camera techniques continue to stun. At one point, mad with grief, Viktoria runs through the streets, and the camera runs with her, and her past swirls around her, and the sun glitters in the trees, and it all feels new and brilliant, like you’re watching cinema being invented before your eyes. 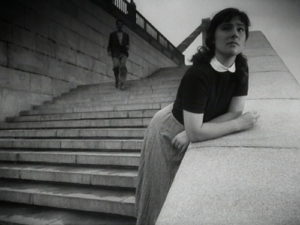 Tatiana Samoilova is as lovely as the cinematography. She’s radiant. Her eyes go deep. She expresses joy and pain with equal intensity. I don’t know how you could watch this movie without falling in love with her.

She returns as Tanya, one of three geologists in Letter Never Sent, who with their guide are exploring the forests of Siberia in search of diamonds. The geology of the region is said to be identical to that of the areas in Africa where diamonds are rife, so they figure sooner or later they’ll come upon a glorious find. There’s a fair amount of Soviet-era propagandizing in here, at least in how the characters are so happy to be serving father Russia, and how they dream of the great industries a wealth of diamonds will fund.

Soon we find there’s something like a love triangle. Tanya and one of the other geologists are in love, but their guide has a serious thing for Tanya. Tensions mount. But then? Then a diamond is found. Success! A miracle! Fade to black. 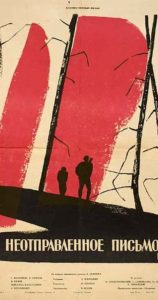 Fade up on a forest fire. Now, I have no idea where or how this movie was filmed, but as far as I could tell watching it, they actually set a forest on fire. Everything is on fire. All around them. Trees are toppling. It’s insane. They race through fast as they can in hopes of reaching the river and escaping the flames. Not everyone makes it.

This sequence goes on an incredibly long time. What with an entire forest seemingly on fire, perhaps they decided to use as much of it as possible? Once again, the cinematography is hands down some of the most amazing work I’ve ever seen. At times, Urusevsky must be using infrared film. The trees and anything else green turn soft and white like they’re made of snow.

Eventually, it snows. This is Siberia, after all. It’s got a rep to uphold. Cold and deadly, despite the occasional forest fire.

Our heroes can receive on their radio, but not transmit. They know rescuse planes are out looking for them, but they’re way off course because of the fire. It seems doubtful they’ll be found. 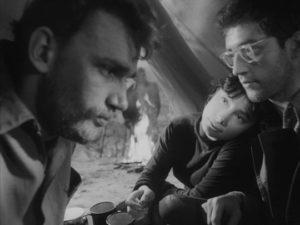 I’m not giving away the end, but it’s both sad and uplifting. And, of course, basks in the strength and glory of the Soviet Union.

Letter Never Sent isn’t quite the masterpiece that is The Cranes are Flying, but purely in terms of its cinematography it’s a must-watch. Every shot is a stunner.

Cranes are Flying is also sad and uplifting. It’s a powerful, emotional story from start to finish. Some of it careens toward out and out melodrama, but does so in a way you can’t help but love. These are two movies I’d love to see on film in a theater. I can picture them shimmering. Black and white never looked as good as this. 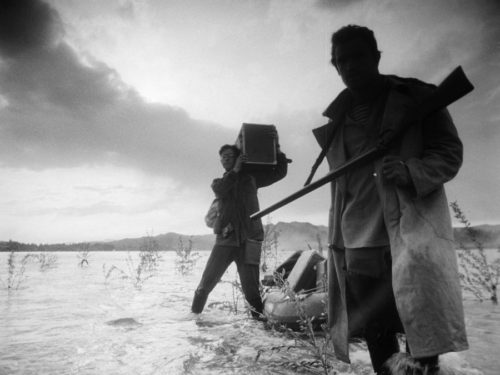