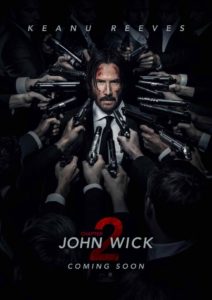 One would have thought, after seeing John Wick in ’14, that, as the Evil Genius put it here, Mr. Wick had put as many bullets as he could in as many faces as he could, such that by movie’s end he’d run out of both.

Turns out John Wick (Keanu Reeves) was holding out on us. He’s still got all kinds of bullets, and where’s he going to put them if not into the world’s remaining faces?

John Wick: Chapter 2 picks up where the first John Wick left off. I think. I can’t recall much of the first one, aside from all the people being shot. It seems the Russians are still in possession of Wick’s beloved ’69 Mustang, and he spends the opening sequence getting it back. He accomplishes this by shooting any number of people in the face.

So. He’s got his car (slightly dented), he’s got his new dog (unnamed), and he’s got his swanky house (all to his wifeless self). Time to relax and enjoy one’s retirement, am I right?

No. Of course I am not right. 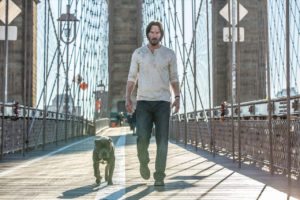 A boy and his dog.

Santino D’Antonio (Riccardo Scamarcio), Italian crime lord, stops by to chat. He’s got a silver “marker” with a skull on it, and Wick’s bloody thumb print within. Seems he was instrumental in securing Wick’s original retirement, back before his wife died, and now he wants the favor repaid. Well, Wick isn’t interested in honoring his marker. Santino is not pleased. Trouble ensues, and before you know it, Wick is stuck carrying out this one last task of Santino’s. Which is to kill his crime lord sister in Rome.

If you think you know how many faces Wick uses as bullet receptacles in Rome, you’ve got another think coming, in the form of a bullet, that is now in your face. A lengthy sequence underground in the catacombs sent me back in time many years to my days of playing Doom II, creeping around dark brown passageways and shooting monsters in their ugly faces with my shotgun. Wick would have loved Doom II.

Plotwise, things spin out from here in ways you more or less expect. Everyone wants revenge on everyone else, and sooner or later, 1) everyone wants to kill Wick, and 2) Wick fills all of their faces full of bullets. 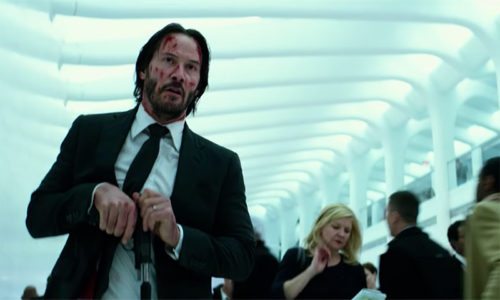 Taking secret pot-shots in the subway

What sets the movie apart from others of its ilk is how the action sequences are imagined, choreographed, and shot. Director Chad Stahelski, stunt choreographer Jordan “J.J.” Perry, and cinematographer Dan Laustsen accomplish this with obvious love and respect for action—and a hell of a lot of prep work. Lousy action movies—and so many are so very lousy—shoot fights and chases using three main tricks: tight close-ups, shaky cam, and rapid-fire cutting. Even the most unimaginative, poorly shot action sequences can be rendered entirely generic with these three tricks. They provide the surface illusion of “excitement” without being anything of the sort. They tend toward monotonous incoherence.

In the Wicks, you’re never lost amid the action. You know where every face is relative to Wick, and you’re never unaware of when and how they’re shot full of bullets. Of course Wick doesn’t only shoot faces. He also kicks asses. The fights don’t reach the spectacular heights of those in, say, the Raid movies, but like all the action sequences in Chapter 2, they make sense. You can follow them. And what good is an action movie if you can’t follow the action? 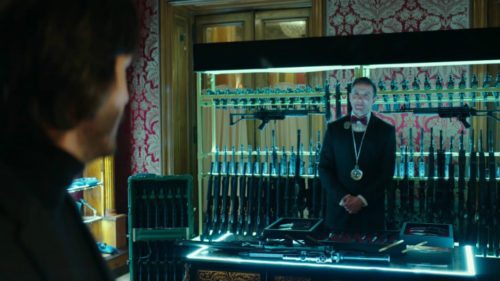 “Any one of these is ideal for home defense.”

I liked the first John Wick okay, but it didn’t leave much of an impression. John Wick: Chapter 2 is a better, weirder movie. It’s got more memorable set-pieces, including a chase through a subway station with a great pause once Wick and his pursuer, Cassian (Common), reach a crowded subway train. Stop by stop it empties, until finally they’re free to fight. The final showdown in a museum’s hall of mirrors is perhaps not as subtle as Orson Welles’s version in The Lady from Shanghai, but it’s pretty and gleaming and features far more bullets in far more faces than Orson Welles every dreamed of.

The other thing Chapter 2 has over its predecessor is a joyful plunge into the surreal, a surreal that, wisely, it never shouts and waves its hands about. It plays its strangeness straight-faced, without explanation, as if it’s all perfectly normal.

Charon ferries Wick to his destination.

Wick and Santino and everyone else in the movie are tied together by a mysterious, worldwide cabal of assassins and other underworldly types, all of whom use the Hotel Continental—and what are presumably its sister branches across the globe—as their hub, and follow its arcane rules to the letter. The Continental shows up in the first movie, but here its inner workings come to life, as does the impression that our world is peopled largely by assassins awaiting their next assignment.

When a worldwide hit is put out on Wick, there’s barely a soul alive not out to get him. And speaking of that hit, it’s made through the Continental’s secretarial/phone center, which resembles something out of the ‘30s, with its typewriters, pneumatic tubes, rubber stamps, and jangly old phones (operated by heavily tattooed secretaries). It’s an off-kilter world Wick inhabits, to be sure. 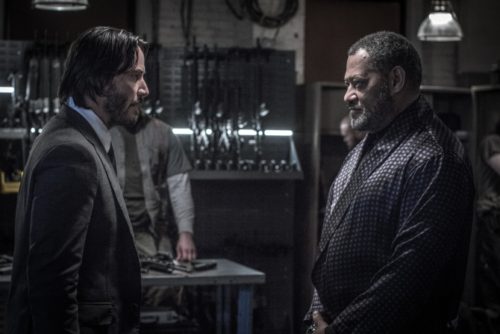 The red bullet or the blue bullet?

Wick seeks help only once, from the Bowery King (Laurence Fishburne). He appears to rule the panhandlers of the city, who are, like everyone else in this world, master assassins all, and are in some sense as connected to the Hotel Continental as is Wick.

Is Wick the Grim Reaper? An unkillable phantom yet to fully grasp his true identity? Does his world populated by assassins represent our world of regular folks struggling not to succumb to the inevitable swipe of the Reaper’s scythe? Well, sure. Why not? I’d love to see writer Derek Kolstad delve even deeper into the mythological in Chapter 3. It’d be a natural progression, and make for a much more interesting trilogy of hit-man movies than the first John Wick suggested. 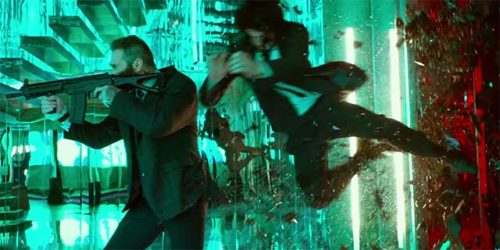 Pardon me, but would you mind holding these bullets? With your face?