I’ve been watching some movies. Not a ton, frankly, but a few. A few being three.

Manchester By the Sea 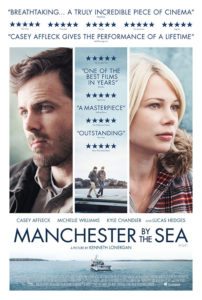 I thought it was okay. I thought Casey Affleck was also okay. His role — that of a man who’s made a mistake so ghastly it pulverizes his life into polenta — required him to say little quite a lot. He gets in fights. He behaves rudely. Then, his brother dead, he ends up in charge of his teenaged nephew. And that’s the drama of the picture; will this broken man find a way through his suffering?

A lot of people weren’t thrilled that Casey Affleck won an Oscar for this film. That’s because Affleck was sued for sexual harassment by two former co-workers and settled the claim out of court. And, in that way, this film is like The Birth of a Nation in that its lineage and meaning has been corrupted by (alleged) abuse.

Do we have to care about such things? I suppose we do not. We can — like baby birds — flitter along to pieces of media and see them outside of time and society, as if momma bird is puking them freshly-chewed down our necks. 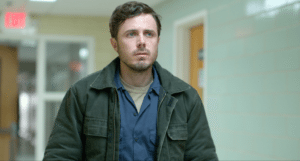 But we shouldn’t do that. If art and artists are split into separate camps, then that hobbles art and gives license to artists.

I know that with a film like The Birth of a Nation, it’s easy to turn away, because that wasn’t a good film. With Manchester By the Sea, the temptation to overlook the history of the artist is stronger. But whether you’re willing to accept Affleck’s culpability or to maintain doubt, the truth remains: this broken man has not successfully navigated the suffering he inflicted on his accusers and, by extension, himself. He’s dodging and, despite it all, accepting awards.

What’s more, the circumstances of the artist have not added a level of meaning to the end product — as they did with Eyes Wide Shut. They just make one feel icky about cheering on a man accused of sexual abuse. So I won’t do it.

I found Affleck’s performance solid but not moving.

I didn’t see any of the roles against which Affleck’s was judged, save for Ryan Gosling‘s, but I’m sure we should have given the award to Denzel.

Or maybe even to Shia LaBeouf. That would teach would-be sexual abusers a harsh lesson. 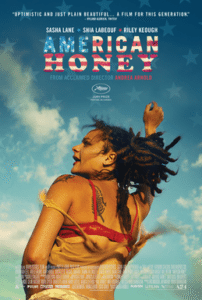 For a film starring Shia LaBeouf, American Honey is extremely good. It’s long, and meandering, and chaotic, but it also opens a Being John Malkovich-like door in the back of your head, transporting you to an age you’ve long outgrown and a time you’re too decrepit to understand.

It reminded me of Spring Breakers, but with a lot less of that film’s wry meta-humor and a lot more of the amped-up emotion and brain-addled intoxication of actual, bona fide youth. And impoverished youth at that.

I suppose I can recommend you watch it. If Shia LaBeouf was born to take a role, it might well have been this one. He’s Jake, the extroverted, unhinged leader of a gaggle of interstate magazine saleskids. Right? Right. He plays foil to Star (Sasha Lane), who, like the rest of the cast, nails her role as an untethered adultling packed in a van singing pop songs and swigging vodka from a plastic bottle while some guy waggles his pecker around. 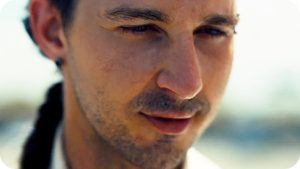 Wait! Don’t punch me in the face yet!

This is America. What are we kidding? We got us a family here!

You may not like American Honey. You may not enjoy it’s odd shambolic symbolic synthetic beat. But that doesn’t make these lives any less real or important than the one Casey Affleck plays.

Fuck it. They should have given Shia LaBouef the Oscar. That would have been hysterical. I would still be laughing. 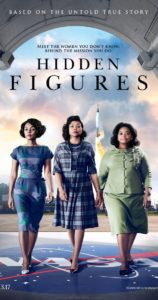 You, when ordering it (or going to see it), have a completely correct impression of what it will be. You can picture it. You can taste it. It arrives and yes, you were correct. Strawberry ice cream!

But that doesn’t mean that strawberry ice cream isn’t fucking delicious. That you won’t savor each bite, thinking of summer storms and that time you kissed Mary Lou down by the lake.

Because Hidden Figures takes a basic recipe and makes it near perfectly using exceptional ingredients. The performances, the pacing, the dialogue, the story arc, the history and reality of it — these things all combine so as to leave you full of emotion. You know what will happen, but that doesn’t mean you won’t be rapt watching it happen. 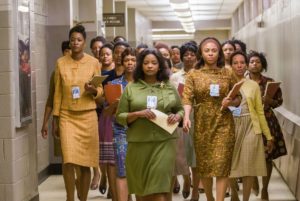 I was rapt, and I’m a jaded old coot. What these women did — speaking both of the historical figures behind the characters, and of the actresses who portray them — is amazing work. Their bravery still astounds me when I think of it.

Hidden Figures is some of the best strawberry ice cream you’re likely to ever have. It’s also a beautiful story for an ugly time.