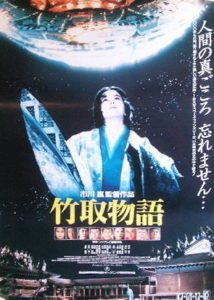 I’d never heard of famed Japanese director Kon Ichikawa’s late career science fiction fairy tale, Princess from the Moon (Taketori monogatari), until the other night when I came across its name and thought, say, I like moon movies, and Japanese princesses, and the ’80s. Well. Some of the ‘80s. I don’t like Peter Cetera, who, inexplicably, sings the end credits theme song to Princess from the Moon, and is no Kevin Costner. But I’m getting ahead of myself.

Set in 790, Princess of the Moon tells the story of Kaya, a baby moon-girl thrown from a spaceship about to crash-land on Earth, with an emphasis on “crash.” It’s blown to pieces. In her golden escape-pod, baby Kaya survives.

Only wait, let’s back up a little more. A couple, Taketori-no-Miyatsuko (Toshiro Mifune, who for some reason I had trouble recognizing. Maybe I’m too used to him as a young samurai?), and his wife, Tayoshime (Ayako Wakao), simple bamboo farmers, have just lost their five year old daughter, Kaya.

While grieving one night soon thereafter, something explodes nearby (the crashing spaceship, but they don’t know that yet). Taketori investigates and finds, in the bamboo forest, a few feet from Kaya’s grave, a strange, metallic pod, and in it a baby. Being a magical moon-baby, she turns into a replica of five year old Kaya, only with eerie blue eyes.

Things get strange after that. 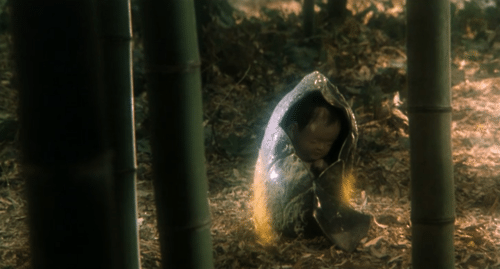 The story is based on an old Japanese fairy tale, The Tale of the Bamboo Cutter, and Ichikawa doesn’t skimp on the fairy tale vibe. The entire movie glows with light and color. The edges of the screen seem to shimmer. It’s a dreamy, unreal look, kind of similar to Ridley Scott’s Legend, of all things. Same era, anyway. In a word, it’s lovely. Though various images are reminiscent of other movies, on the whole it’s like nothing I’ve ever seen. It’s not exactly a fast-paced story, but the odd beauty of every shot, which Ichikawa frames like paintings, kept me fascinated throughout.

Kaya turns into a young woman as quickly as she turned into a five year old girl. Naturally, all the local lords fall madly in love with this mysterious peasant. Three ask her to marry her. To decide, she assigns each the impossible task of acquiring a mythical object: a tree that bears diamonds, the fabled fire-rat fleece, and the jewel from the head of a dragon. Their efforts produce mixed results.

Meanwhile, Kaya’s glowing moon-orb (of course she has a glowing moon-orb) begins talking to her, like they do, and she spends her nights staring at the moon as if in a trance. 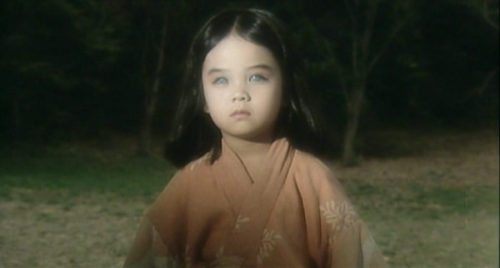 Demon child from the moon!

Do we get to see the dragon? You bet. It reminded me of the Loch Ness Monster. Later I learned the prop had been originally built as just that, for a movie never made. It’s exactly as daffy as you’d expect from ’87.

We also get to see a spaceship. Safe to say Ichikawa is a Spielberg fan. His spaceship owes a lot to those in Close Encounters and E.T. It’s massive, it sparkles with thousands of too-bright lights, it hovers ominously, then zips around all crazy-like.

And the costumes. I don’t know if they adhere to the historical record—maybe the historical fairy tale record?—but no matter. They’re like tents, like wildly colored, intricately designed Japanese circus tents. If people actually had to live in outfits like these, it’s no wonder their dreams abounded with blue-eyed, magical moon-princesses.

Princess of the Moon met with what’s gently known as a “mixed reaction.” I don’t know what I would have thought at the time, but I think it’s aged weirdly, in the best sense of the word. The effects are both dated and other-worldly. So too the movie as a whole. It’s like watching an old dream of an imagined past’s dream of the future. 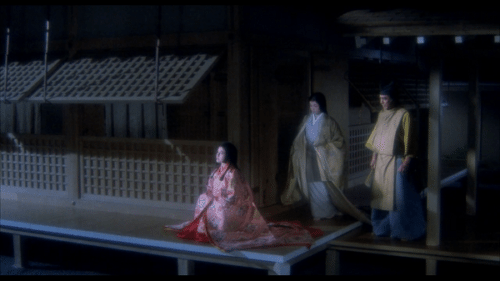 One response on “Princess From The Moon: The ‘87 Japanese Sci-Fi Fairy Tale You’ve Been Dreaming Of”