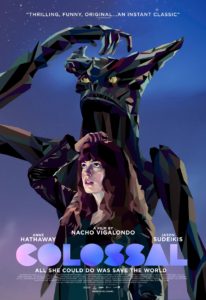 I feel like I like Nacho Vigalondo’s movies without, I realize, ever having liked them very much. Along with his new giant monster movie, Colossal, I’ve seen Timecrimes (’07) and Extraterrestrial (’11), and while all three have a lot going for them in a low budget sci-fi way I’m ever fond of, none of them make much of an impact.

Extraterrestrial involves alien spacecraft arriving and hovering over the Earth, but the movie isn’t about aliens or the end of the world. It’s about relationships, and for that it’s not bad. On the other hand, I only saw it a couple of years ago, and I can’t remember a damn thing about those relationships or the characters or what happens to them.

Colossal might be Vigalondo’s best yet. And it doesn’t stick the landing either. It’s got a nutty conceit at its center involving a giant monster, always a plus, Anne Hathaway does a great job as Gloria, the alcoholic mess of a woman who returns to her parents’ house in a not-very-genuine attempt to get her shit together, there’s a lot of funny scenes, there’s a nice big surprise not featured in the trailers, and…

And it doesn’t really work. I wanted it to. I was pulling for this movie. For at least the first half, it’s solid. I laughed a lot. It builds slowly, and though from the trailer you know it’s Gloria controlling the monster half a world away, it’s fun to see her figure it out. The guys she meets back in her hometown (only guys, Hathaway is the lone woman in this movie) are at first a funny trio. Oscar (Jason Sudeikis), Garth (Tim Blake Nelson), and Joel (Austin Stowell) never left town and spend all their time in Oscar’s bar. They’re thrilled to have a woman for a new drinking buddy. 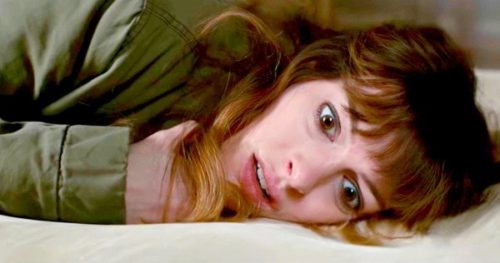 The monster at rest

It’s clear this isn’t a movie about a monster stomping a city. It’s the story of a woman taking control of her liquor soaked life. Or so it seems.

Is it? It’s not, really. I don’t know what it is. Oscar, who obviously had a serious unfulfilled thing for Gloria when they were young, starts acting creepy, and the scenes go on too long, and how we’re supposed to read Oscar is oddly unclear. Is he dangerous? Merely creepy? The threat level is so ambiguous it’s hard to know what to care about or worry about or wonder about.

A past event in Oscar and Gloria’s life is what brings about the whole monster angle. It’s revealed slowly over the course of the movie. When we at last see what happened way back when, it’s the kind of moment in a kid’s life they’d never forget. So why did Gloria forget about it? Why does it take her a whole movie to remember that fateful day? And why did this event cause all of the trouble anyway? 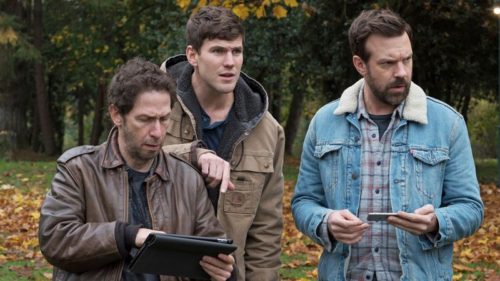 The movie seems to be suggesting that it’s this issue between Gloria and Oscar that’s caused her to be who she is today, but it doesn’t bring it home. Gloria doesn’t even remember the guy, let alone what happened when they were kids. Which event, while it should be memorable to a kid, isn’t weird or violent or anything. It’s just mean kid stuff.

Oscar, he’s the one who needs to get over his fucked up childhood. But the movie isn’t about Oscar. This is Gloria’s story. Only I still don’t know what the events of the story mean for her. She learns, I guess, that one shouldn’t take shit from creepy childhood ex-friends? But she doesn’t take any shit from him. Oscar isn’t her problem. She’s his.

Colossal slogs by the end. Watching it one strains to see what’s driving the characters, what we should be hoping or fearing for them. It’s too vague to support the long, talky scenes.

Even the ending feels off. Yes, Gloria stands up and does what she needs to do to solve the immediate problem of Oscar being a crazy asshole, but what’s that got to do with her life issues? I can’t see that it has anything at all to do with them. The movie ends on a laugh, a reference to Gloria’s un-dealt-with alcoholism, and while it’s nice to go out on a gag, it’s a reminder that Gloria doesn’t face her present, her past, or her future in this story in any meaningful way.

So Colossal ends up being very much another Vigalondo movie: fun premise, good scenes, and interesting ideas that fail to add up to a satisfying story. 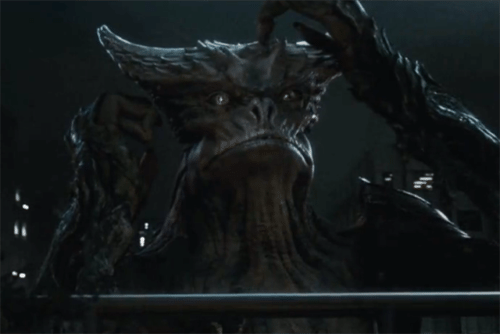 One response on “Colossal: Half A Good Movie, Half A Head-Scratcher”