It is the position held in the heart of The Fate of the Furious that a single baby is more important than our collective nuclear annihilation.

From our flawed real-world perspective, Dom’s fetishization of the concept of family has finally graduated from weak characterization to true revelation: this guy is a psycho. The combination of his superpowers (he can, while driving, cause anything to occur) with his instant, utter disregard for everything and everyone else he’s ever held dear make it far too dangerous for him to remain in the world.

He must be stopped.

But in the film’s universe, this elevation of the baby makes plenty of sense. It is not simply a baby. It is Dom’s baby. It is a messiah, born unto stick shifts, destined for NOS. In fifteen years, it will be careening an American muscle car across the bow of a space station in order to thwart transhuman time terrorists. The baby is our future and our salvation. 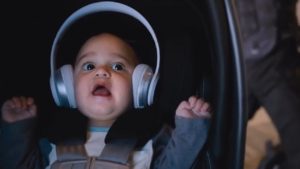 I’ve got you, babe. And you’ve got all our souls in your stubby little fingers.

Thus it is not nonsense that his mother spent the last two (!) movies concealing this baby from us. Its birth was so immaculate that she herself was unaware. And so also, it is not foolishness that Dom betrays his crew, his country, humanity itself. He must. It is so ordained.

There are unacceptable moments. Not in Statham’s predictable flop away from villainy; the Rock already taught us that each charismatic bald man must ripen from adversary to teammate. Neither in the way that physicality has slowly excused itself from the franchise; we marveled once at metal cars upon a road, but here, within our vivid now, those cannot suffice.

This eighth escalation’s sins are more wretched: they are failures of stewardship. The F8‘s first ensemble driving sequence features no hand-held walkie talkies. Concerning! The central McGuffin of the previous film (God’s Eye) rides shotgun on a second plot, throwing the accepted patterns of per-film stake-heightening into absolute confusion. Outrageous! Butts dangle out from short shorts ahead of the title card, then never after. What on earth is going on!? Has our new director not seen any of these things before?

Each of us must remember that these films were always built from unacceptable moments and that it is only the familiar looming of those moments’ onslaught that comforts us. Recall how characters have come and gone and been replaced and then returned without displacing their replacements. They have lived and died and lived again as time and reality warp around the marketability of whoever is available.

A humble Point Break rewrite, in which some home-theater hijackers struggled to impede one truck, became this perpetual terrifying devotional cartoon, an oversaturated sacred chant about the world’s most unstoppable mercenary outlaw commandos and the parade of priceless cars they discard into the flame. No single acceptable filmmaking decision led us here. The vast tower of bad choices became something else, a history, a promise. 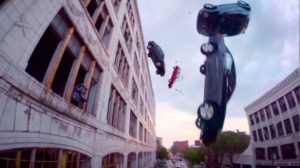 The first scene from The Happening, but with cars instead of men

Legion, these choices have cemented into our world’s brightest, finest, most purely wrought trash. If this trash somehow failed to anger us with new accomplishments in wrongness and bad taste, how could we rely upon it? How could anyone rest easy, safe, assured that a higher power looks down from the tippy top of the $250M summer tentpole and deems us worthy of another deafening, deadening excursion?

It is not merely our Fate to be here. It is our privilege. We are each the baby in the earmuffs, cooing and giggling as Statham murders everyone nearby. We are the drag-racing-through-spacetime protagonists of FasTwelve and We L1v3 Furiously. We are our own messiahs.

Pray that Dom betrays us all when the moment’s truly right.