A few days back, the always somewhat insane and cocky Ridley Scott gave an interview in which he claims the question of whether or not Harrison Ford’s character in the original Blade Runner is a human or a replicant will be answered in the coming sequel, Blade Runner 2049. This struck some as odd, seeing how the director of the sequel, Dennis Villeneuve, has said he intends to keep it an open question.

Scott also explains that in his mind, Deckard was always a replicant. Something he made obvious and explicit in his director’s cuts. He tends to act gobsmacked whenever he’s asked in interviews whether he’s answered the question or not. It’s right there on the screen!

It’s going to take a little work to unpack this one.

Let’s start with Philip K. Dick’s 1968 novel, Do Androids Dream of Electric Sheep? It’s not much at all like the movie. The overall scenario is similar, and a handful of scenes make the trip from book to screen, but the book is not about equating humans with androids (they’re called androids in the book). The book gives us a very human Deckard struggling to figure out what it is that sets humans and androids apart. The answer is empathy, which Deckard fears he’s lacking. In the end, he finds it’s the androids who lack empathy. It’s what gives them away. 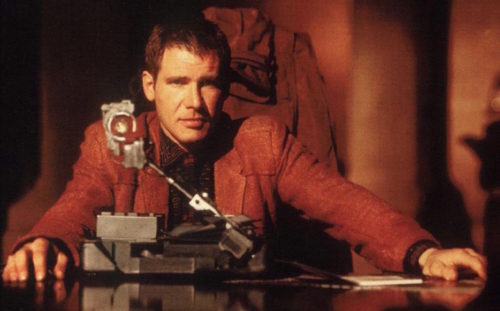 In one especially creepy paranoid sequence, Deckard is brought to an alternate police station and told the station he thinks is real is a fake. Worse, he’s told that he’s an android. But he’s not. The alternate station is the fake one, run by android cops.

So the book is necessarily and by design about a very human cop. It full of PKD’s normal obsessions: identity, humanity, religion, empathy, psychology. Were Deckard an android, the book couldn’t exist in its current form. It would be a different book.

Hampton Fancher adapted Electric Sheep, and once Scott came on board, David Webb Peoples wrote the later drafts. They took the story in a very different direction. Empathy played a role—the test used to spot replicants uses empathy as its basis—but the movie isn’t about empathy. Its point is almost the opposite of PKD’s in the book. Whereas PKD wanted to explore what sets humans apart from machines, the movie wants to equate humans with replicants, it wants to suggest we’re all essentially the same. 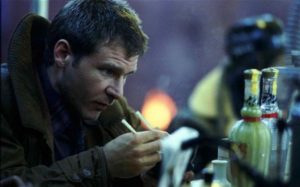 More than that, the movie presents us with a Deckard who seems barely to exist. He lives alone, eats alone, drinks, plays piano poorly and despairingly, and evinces no emotions about anything. In contrast, the replicants he’s sent to hunt down are full of life. They’re more human than human. They’re embracing life, every moment, to the point of actively hunting down their creator and demanding more of it. Pretty much what any of us would like to do if we could. And if our creator said, sorry, your lifespan is built in, I can’t do a thing? I bet we’d shove our thumbs in his eyes and kill the bastard, just to prove we can. Classic move, killing one’s father.

Further getting into this theme, Deckard finds his lost humanity through his experiences with the replicants. He falls in love with Rachel, and maybe a little with Roy Batty, too. Maybe? In any case, Batty’s humanity is impressed upon him in dramatic fashion.

And Deckard, so impressed, says fuck it. He grabs his true love and takes off.

Is this Deckard a human or a replicant? 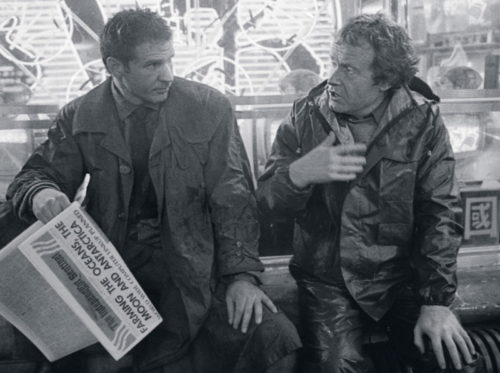 In the originally released version, there is no answer to that question. More importantly, the movie doesn’t ask it. Deckard’s humanity is assumed. Given Fancher’s opinion on the matter—that OF COURSE Deckard is a human—this isn’t surprising. If the theme of your movie is, in part, a man dead to the world rediscovering the very things that make him human, it wouldn’t make a whole lot of sense to say he’s a replicant.

Is there still ambiguity? There is, but crucially, it’s not purposeful ambiguity. It’s incidental ambiguity. The world of Blade Runner is one where replicants exactly resembling humans exist, so sure, Deckard could be one. So could Gaff. So could J.F. Sebastian, Tyrell, and Hannibal Chew. But lacking is any textural evidence to suggest Deckard or anyone else is a replicant. I recall people back in the day making arguments about the way light reflected in the eyes of Deckard, that it was orange in the same way light was reflected in the eyes of the android owl. This strikes me as quite a stretch. You might decide the movie is ambiguous, but there’s nothing in the film to suggest it. The wiggle-room exists only because no one ever explicitly says Deckard isn’t a replicant. No one says he’s not a monster from outer space, a dream dreamt by Batty, or an android badger in disguise, either, for that matter.

Purposeful ambiguity, on the other hand, is there, as perhaps you might expect, on purpose. The point of purposeful ambiguity is, usually, to force the realization that debating the answer to whatever’s in question is not the point. The point is that the answer doesn’t matter. So for example, the end of Inception is purposefully ambiguous. You can argue whether the top stops spinning or goes on forever after the screen cuts to black, but there’s no winning that argument. It’s not designed to have an answer.

Which is to say, the answer is that that there is no answer. Cobb has found his happy place. It doesn’t matter if it’s a dream or not. That’s the message of the movie. Cobb doesn’t need to know what happens to the top, and if he doesn’t need to know, we don’t either.

The brilliant end of The Sopranos works the same way. Does the black screen represent Tony’s death or doesn’t it? The last scene is shot with mounting tension and every indication that Tony’s about to be shot, but is he? The answer is that there is no answer. This is Tony’s life. At any moment, he could be whacked. There is constant tension. Clues everywhere. Suspicious people at every table. He might die at the end of the show, or maybe a day later, maybe ten years later. There is no determining what happens at the moment the image cuts to black because it’s not designed as something that needs determining. That there’s no knowing is the point. 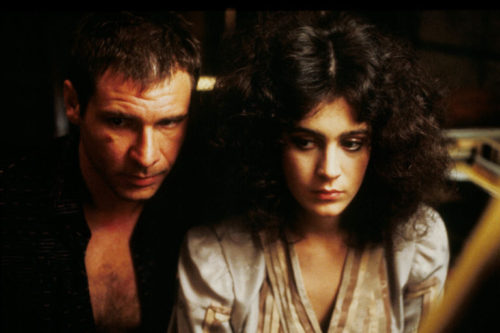 Turns out Scott always thought Deckard was a replicant, even back in ’82. In his first director’s cut, from ’92, and in every subsequent tweaking, there’s a shot of Deckard imagining a unicorn. This matches up with the origami unicorn left by Gaff at the end of the film. It’s a message to Deckard: I know what’s in your head. And the only way he can know is if Deckard’s a replicant. (Or maybe Gaff is telepathic! Or a space monster! Or he and Deckard used to hang out and swap stories of their secret dream creatures! Or in the future, everyone’s favorite movie is Legend!)

So there’s no argument to be had here. In each of Scott’s later cuts, Deckard is a replicant. Why people argue otherwise is beyond me, but they do it all the time. This is how film works, people! Images mean things. In this case, the images could not be any more blatant. The only way Scott could have made it clearer would have been to have Gaff pop up out of the elevator at the end, grab Deckard by his coat, throw him against the wall and yell, “YOU ARE A REPLICANT!”

Now we have a new movie, Blade Runner 2049, where Scott tells us the question will be answered once and for all.

He’s wrong. It can’t be. All it can do is provide another answer. Which answer, by the way, will be that Deckard is human. Or so I surmise. How else could he father Ryan Gosling? Of course he’s Gosling’s dad! Do you not watch movies? 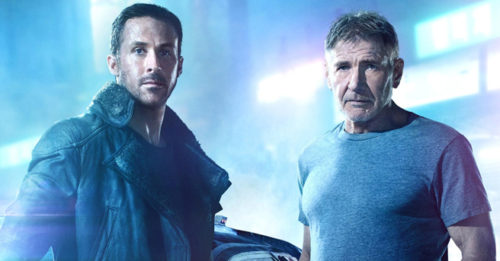 It doesn’t matter what answer Blade Runner 2049 gives us, because here’s the thing: the real debate isn’t ultimately about what any given iteration of the story presents us. The real debate, the only one we should be having, is more philosophical than that. It’s about what the pure Deckard is, the Deckard untethered to any one story, the urDeckard, the very Platonic ideal of Deckard.

I’ve spent so many years arguing with dunderheads about the unicorn shot I lately realized I’d never given enough thought to whether Deckard should be a replicant.

The only answer that makes sense is: No. He shouldn’t be a replicant. And so, I say, philosophically speaking, he isn’t. It’s really the best answer.

Some might argue that the urDeckard should remain ambiguous. They would have it that, as in the purposefully ambiguous examples above, the answer is not the answer. The answer is that there isn’t an answer.

It’s tempting to agree, but this view has two problems. First, it applies only to the Deckard of Blade Runner. In Electic Sheep, he’s human, he has to be human, ambiguity would ruin the story. Second, if, in Blade Runner, we decide his nature is ambiguous, we have to ask how that affects the theme of a man rediscovering his humanity. Is it as powerful a story if he’s a replicant? No. It’s not. It’s kind of…well…mushy, when you think about. So he’s a replicant? But a bored one? And the other replicants show him how to live like—well, like a better replicant, and thus like a better human? I don’t know. Sounds kinda stupid.

Or do we focus only on the no answer answer, and say the theme is beautiful only if we don’t know what Deckard is? Better, but…no. Still mushy. Now we’re saying replicants and humans are the same in the sense that some are full of life and some aren’t and we all have to learn to live and…yawn. 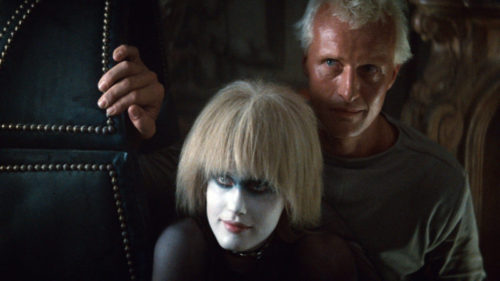 Living life to the fullest

If Deckard’s human, though, we have a story that suggests something maybe less novel today than it was in ’82, that an artificial intelligence could not only pass for a human, but be indistinguishable from a human, and further, that it might in its struggle to find meaning become a more evolved human than the humans themselves. Deckard comes at last to understand this, and thus regains some measure of his lost humanity.

Deckard’s Platonic ideal is a human Deckard. Scott was wrong to add in the unicorn. Turning Deckard into a replicant weakens the story. The most powerful, meaningful Deckard is a human one.