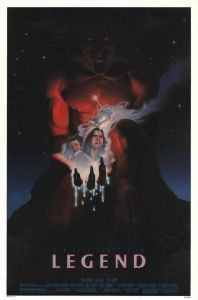 So I saw Legend. Never seen it before. Which is strange, what with me having seen damn near everything in the ‘80s. Did it seem too girly to my youthful teenage self? Possibly. But then again, looking at ‘80s fantasy movies, I saw, among others, Dragonslayer, The Beastmaster, Clash of The Titans, The Dark Crystal, The Company of Wolves, Ladyhawke, Return to Oz, Labyrinth, and Willow, so it’s not like I was against watching unicorns, little people, princesses, talking puppets, mighty evil, and David Bowie’s hair. Maybe seeing Tom Cruise in the trailer dressed as Peter Pan scared me off? I was even pretty keen on Tangerine Dream (or at any rate their soundtrack to Risky Business). And the special effects are by Rob Bottin, who I worshipped for his work on The Thing. The reviews? Did I care about reviews? Not so much.

I think Legend must have had the Stink on it. The Stink of bad movie. Some movies you can smell it a mile away. I didn’t see (upon their initial release) Yor or Krull or Spacehunter: Adventures in The Forbidden Zone for the same reason. Not that the Stink scared me away often. I mean I saw Zapped!, Superman III and IV, The Ice Pirates, and Howard The Duck as soon as they came out. And nowadays, as a discerning adult, I often seek out the stinkiest Stink I can find. 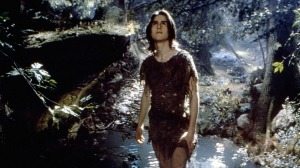 Specifically, wanting the full 1986 vibe, I watched the original U.S. release version, the shortest version at 89 minutes, and featuring the Tangerine Dream music (plus a pair of pop songs) replacing Jerry Goldsmith’s original score. Goldsmith’s score played with the 95 minute European cut. Prior to releasing the movie, Scott created a 113 minute test-screening print, one re-discovered by Universal archivalists in ’00. Scott fixed that one up and released it as his Director’s Cut. It contains all kinds of differences about which I know nothing, plus it keeps Goldsmith’s music.

Perhaps the Director’s Cut is the way to go? Certainly paid off with Blade Runner. Alas, I may never find out, because at 89 minutes, Legend is already brutal to sit through. I’d have to hear an awfully convincing argument to revisit this one.

Yes, in short, I did not enjoy my trip into the fantasy dreamings of Ridley Scott. It is, to be kind, a film of extreme dopiness, with a story that only makes sense because, you know, good and evil, imprisoned princess, sad unicorns, nature boy turned hero, you get the idea, and that’s all you get, because it’s one hell of a muddle. Maybe the long version has editing that makes sense? Time for scenes to develop?

The opening crawl is astounding. You couldn’t write a funnier fantasy-parody. Upon reading it I cried out, “Holy mother of god! No wonder I never watched this.” But, to be fair, the movie had my attention. Would this be an unheralded genius work of bad on a par with Zardoz?

Well, no, and really I wish any movie was as great as Zardoz. None are.

Legend, you may recall, stars Tom Cruise, a very young and earnest Tom Cruise (one movie away from Top Gun and massive stardom), dressed in leafy forest greens, as Jack. He’s introduced holding a fox in his arms. You kind of want to punch him. Mia Sara (of Ferris Bueller fame) plays his ethereal princess-girl-person, Lili. They frolic and whatnot, until one sad day when she insists on touching a unicorn. Foolish girl! Jack is quite put out at the notion, but off she goes. The moment she lays a hand on it, the evil dwarves in the employ of Darkness shoot a poison dart in its neck, and man does that unicorn ever go bugfuck crazy. 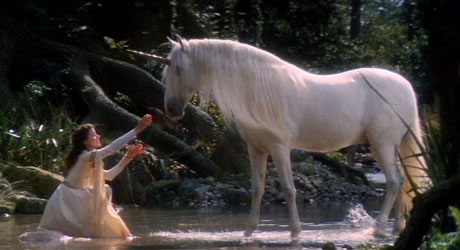 Darkness is played by Tim Curry and he’s awesome. He’s the one great part of this movie. His make-up is colossal. An enormous head and horns and full-body make-up, never shot so you can see all of him at once, so vast and evil is he. Not only does Curry act with this massive edifice piled on top of him, he blows away everyone else. He’s evil incarnate. He’s fucking scary. His voice is barely recognizeable as his own (though it is, just). It’s vast and deep and commanding. He owns every scene he’s in. Too bad he has to act against little evil minions playing every scene for laughs.

There are no laughs in Legend, despite the bizarre efforts to be funny. It’s like Scott took Time Bandits as his inspiration. In which the Evil Genius’s employees are anything but geniuses. Only Time Bandits is a comedy. Why undercut Curry’s epic evil demon with little people antics? It doesn’t work. 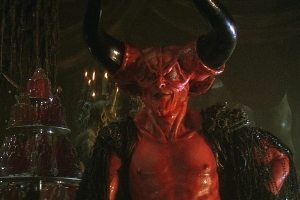 Now that is a mean man

The second half of the movie is a kind of chase scene in faerie-land. Exactly what’s happening or why it’s happening is mostly glossed over. Darkness wants some Lili, and Jack wants her and his unicorns back. To accomplish this, he must be heroic, i.e. kill bad people with a shiny sword, and eventually banish Darkness. He sets up a series of mirrors to guide light into Darkness’s lair while Lili tricks Darkness into thinking she’s going to kill a unicorn. Which I can’t believe Darkness falls for. Once again undercutting Curry’s performance.

Jack meets an elf on his adventures, name of Gump. Who like any self-respecting elf lives in the forest. Hence the movie, Forrest Gump. Right? Who’s with me?

Were the 1980s a golden era of fantasy films? I don’t know. Fantasy was big, anyway. In part as an outgrowth of the Star Warsish/Spielbergish era of feel good special effects movies, but maybe something else was going on too, because the 1980s also had their share of grim R-rated fantasy films, like Excalibur, Conan The Barbarian, Highlander, and Deathstalker (granted, nobody saw Deathstalker. But you should. The Stink is high with this one). The 1970s featured almost no fantasy films. Their time had come.

And then their time went away again. And then we got Harry Potter and The Lord of The Rings, and it’s been non-stop fantasy fun-time ever since. Which can only mean one thing: the Legend remake can’t be far away. I hope they get a director with vision. How about Ridley Scott? He made Prometheus, and now a Blade Runner sequel is coming. Hell, forget remaking Legend, how about rebooting it? Into a trilogy? Tom Cruise can play Darkness! Man, this is going to be great!

5 responses on “Legend, The Bastard Child of ‘80s Fantasy Films”