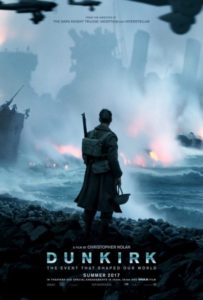 Has Christopher Nolan ever made a great movie? Heading out to see Dunkirk I realized (with the help of IMDB) that I’d seen every movie he’s directed. None of them get there for me. For a movie about a guy in a mask with a frog in his throat, I thought The Dark Knight was really good, with a fantastic performance by Heath Ledger, even if it wears a little on rewatching. Structurally it makes perfect dramatic and thematic sense, yet it still feels a half hour too long. And the fight scenes are impenetrable. Nolan doesn’t excel at filming and cutting fast-paced action sequences.

Other than that, what’s there to love? There’s his passion for movies. It’s why I keep seeing everything he puts out. That and his adherence to shooting on film. He’s also fascinating in that he’s essentially the only filmmaker currently making huge budget, mass-audience, original movies. His Batman trilogy brought him where he is, but since then he’s made Inception, Interstellar, and now Dunkirk. Even Spielberg is on record complaining about the death of cinema due to superheroes. He either makes high-toned dreck like Bridge of Spies—movies with very modest budgets made to win awards—or he’s in the same boat as everyone else: adapting pop culture artifacts with excessive CGI and high nerd-appeal (i.e. Ready Player One).

How does Nolan do it? I’m not entirely sure. His movies are on the one hand cold and unemotional puzzle boxes, yet they inevitably have love and loss as their subject matter. Is this the formula for pleasing today’s audiences? Film Crit Hulk recently wrote a typically long piece deconstructing Nolan’s psyche that’s worth reading (or skimming, anyway), the crux of which is that Nolan is a man terrified by his inability to understand love.

At least that’s what I got out of it. His leads are always troubled, driven men, wracked with the pain of loss, certain there’s nothing more powerful in the universe than love, yet unable to comprehend what love is or how they might go about getting it. His movies are precise and technological and though created with passion, seem always to lack it.

It’s like he makes movies about the wonder of love and imagination that contain neither love nor imagination.

Dunkirk is his latest. It’s both different than and exactly the same as his previous work.

It’s set during the evacuation of Dunkirk in 1940, when the Germans had pressed British and French and Belgian troops up into a tiny patch of beach and seemed certain to kill all 400,000 (or so) of them.

But the Germans slept on their advantage, and the British, using civilian ships, rescued some 300,000 men in one of the more celebrated retreats in the history of war. Celebrated in England, at any rate. In the annals of war, it’s generally the victories we remember. 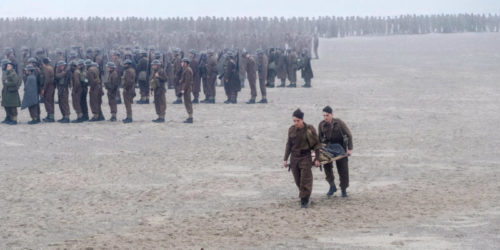 Grab a body, hope to get on a ship

Nolan’s Dunkirk is a minimalist version of the story. As he has himself said, he was not interested in knowing or having empathy for any of the movie’s characters. All he wanted was to know, will they make it out alive or won’t they?

Sounds like Nolan. Also like Nolan, he breaks up the movie into three not entirely concurrent timeframes which only meet at the end of the movie. Storywise, themewise, entertainmentwise, dramawise, I have no idea why he chose to do this. I think he just likes messing with timelines. Jumping back and forth, while not confusing—you get where you are and what’s happening just fine—still forces you to think while watching. You can’t just watch the movie, and you certainly can’t feel it. You observe it from a safe, intellectual distance. You’re asked to think about it while it’s happening.

“Okay, wait, so now we’re back here, right, where the plane hits the water, and now our man in the boat is going to rescue the pilot, okay, here we go,” is how one comes into every scene. Why does Nolan want me to step away from the action to do this every time we change scenes? It’s essentially identical to Memento, where as every scene ends you have to remember how the previous one began. An interesting brain game, but not one that draws you into a story. 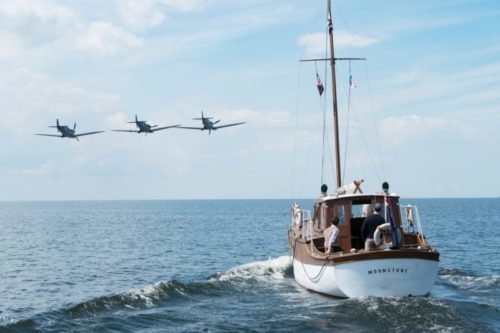 Coming to the rescue

There is minimal dialogue, a technique I wish writers would use more of. Yet in Nolan’s hands this minimalism keeps us at a distance. The man we follow on the beach (Fionn Whitehead) couldn’t be more of a cipher. I was somewhat interested to see how he would survive, but I can’t say I cared about him. He was as faceless as the other thousands of men on the beach, it’s just that his was the faceless face I was looking at most often.

Kenneth Branagh as Commander Bolton shows up to stand on a pier and look alternately heartbroken and relieved, and I felt the same about him: nothing. He acts as the audience stand-in, the man we look to to know whether to feel doom or elation. When, at the end, to the never-hard-to-miss strains of Hans Zimmer’s bombastic score, he cries red-eyed tears, he’s no longer very British, is he? He’s a man in a movie. 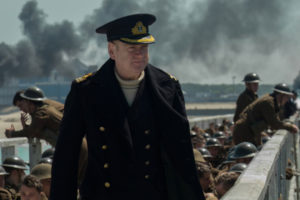 Tom Hardy plays a fighter pilot. He wears a mask on his face and it’s impossible to understand a word he says. Nolan really has it in for this guy.

Mark Rylance plays the captain of one of the many small vessels sent out to rescue the soldiers before it’s too late. He’s the one character we learn anything about: his oldest son has already died in the war. Like every other Nolan character, a dead wife or child defines him.

As far as war goes, this one is almost bloodless. Bombs fall from planes, a few soldiers get shot. The horror of war isn’t Dunkirk’s subject matter. It’s purely based on the excitement of escape. For a film about such a large rescue of so many men, it feels underpopulated. The scale of it is nowhere evident. In this Nolan takes a minimalist’s approach as well. There are three threads we follow. Everything else is extraneous.

There are plenty of nice shots to appreciate in 70mm on a big screen, and the movie never drags. In our current era of tiresome, bloated CGI spectacle, it’s a pleasure to watch anything that clocks in at under two hours. So I didn’t mind watching Dunkirk. It’s an interesting movie with a handful of exciting moments. It’s something to think about, to nod at and say, yes, this was a difficult and important rescue. It’s also a distant and unemotional intellectual exercise. It’s very much a Christopher Nolan film. 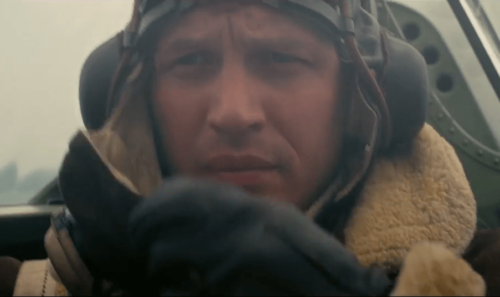 A rare glimpse of the elusive Hardy

One response on “Dunkirk At A Distance”