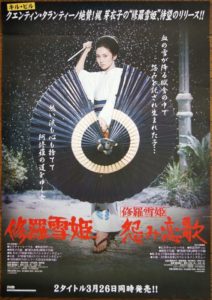 If you scraped any Quentin Tarantino film hard enough (but particularly Kill Bill), you’d see Lady Snowblood peeking out from underneath. It is the Platonic ideal of ’70s revenge bloodbath pictures. It is Suspiria, if you replace all the ballet dancing with eviscerations and the indoor barbed wire room with a barrel rolling top speed down a rocky slope. And all that is good.

Directed by Toshiya Fujita and based on a manga, Lady Snowblood tells the heartwarming tale of an orphan — Yuki Kashima, aka Lady Snowblood (Meiko Kaji) — who lives to kill. Or, more specifically, she is tasked, upon her birth in prison to her dying mother, with avenging the murder and rape of her family. She trains maniacally to do so, becoming a single-minded demon of vengeance. 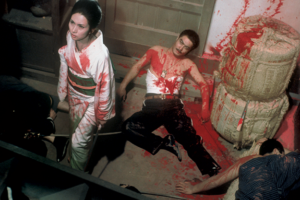 Then Yuki does a bunch of killing, slaughter which is exaggerated by the copious amount of spurting blood her victims project. They must all suffer from extremely high blood pressure, so, in a sense, Lady Snowblood probably is saving them from a life of restricted diet and swollen calves. Just, you know, with an umbrella sword.

Am I making this film sound goofy? It’s not goofy. For one, it looks amazing. Like the aforementioned Suspiria, it’s saturated with color — a lot of which, granted, is blood red. But the cinematography is not grindhouse schlock; it’s vibrant, poetic, and gutsy. Swirling snow and crashing waves and swishing kimonos. 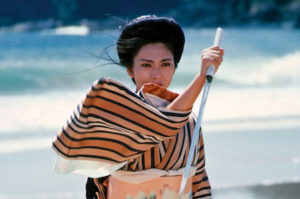 And while the acting may not deserve high praise, the production does. As the story proceeds, divided into evocatively named chapters, Fujita slips in animated sequences that feel so natural, you almost don’t notice the shift from live action. If what you want to watch is a film like Lady Snowblood, you could hardly dream to do better than Lady Snowblood.

But what, I hear you ask, is the film about? Besides spurting veins? Well. Good question.

It is about the tragic cycle of revenge and how fun it is to watch that played out in vivid color. It is about filial piety and the damage we do to our children, damage which they are unable to forget because they’re busy watching Lady Snowblood. It is about how we cannot escape the past, because it will chase us down with its implacable will and gleaming sword. 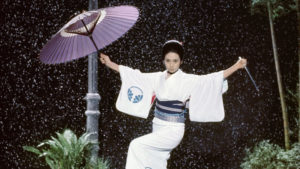 While the film’s final act suffers from some lackluster production design, really: who cares? Lady Snowblood has done what she must, despite the odds or the laws of the physical universe. Kill Bill is a nice paean to this picture, but nothing more. It is to Lady Snowblood what Point of No Return was to La Femme Nikita: an English-language rip-off with no added originality.

Do yourself a favor. Pour yourself a shot of sake in a viscera-smeared cup and watch Lady Snowblood whilst bleeding to death on your couch.