It began life as a very long book written by Stephen King in ‘86. Next, It was a TV movie starring Tim Curry as Pennywise, the evil clown-monster. It is now a new movie raking in more money than anyone expected.

Is It any good?

But what is It?

It is a shape-shifting, child-eating, nightmare-fueled creature living in the sewers of Derry, Maine, that emerges to feed every twenty-seven years, often in the form of a hideous clown. 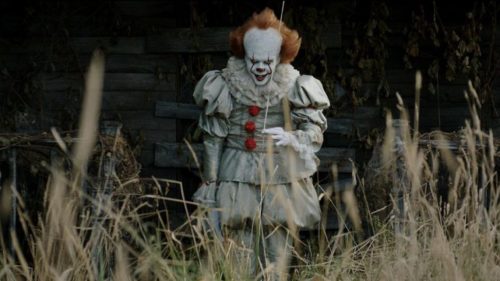 In It, a group of kids have to stop It from eating them or any other of Derry’s often eaten children.

This do they. More or less. Except not quite. Coming soon, the sequel, set twenty-seven years later, with the kids all grown up.

Stephen King’s novel appears to be considered one of his best by those who love Stephen King. I read It once, when It was published, because at the time I was obsessed with all things Stephen King, had ready everything he’d ever written, and bought It the day It came out (I was fifteen).

It wasn’t bad, but It was far from King’s best. The only two things I remember from It are, one, some sort of giant spider It turns into, and the part where all the boys (who are, I think, 11 or 12?) have sex with the one girl because, um, something something, defeating evil, bonding, growing up, let’s get the spider! Though I was a very horny fifteen-year-old boy who could (and did) only dream of amazing girls insisting I have sex with them to save both our lives, I nevertheless recall thinking, “Seriously, King? You’re really doing this? Yeesh. I need a shower.”

If that scene didn’t play to me, then, I wonder how it reads today?

That scene is not, you’ve surely guessed, in the movie, no matter It‘s R rating. Childen having group sex doesn’t really play at the multiplex.

And make no mistake: It is painstakingly designed to play at the multiplex.

There is strangely little structure to It. No build, no character arcs, nothing, really, but, about every ten minutes, a scene of horror, and in between, more children giving profound emotional speeches than one would think desirable.

On the plus side, most of those scenes of horror are excellent. Seeing as the horror is why It exists, why people are going to see It, and why people are loving It, let’s give a hand to director Andy Muschietti and It’s long list of screenwriters for knowing their audience.

Bill Skarsgård, one of actor Stellan Skarsgård’s twenty-seven movie-star children, kills as Pennywise the clown. So to speak. He is genuinely inhuman. He appears in a storm drain during a rainstorm in the movie’s opening sequence and boy is he ever weird and freaky. He doesn’t merely creep out and then grab seven-year-old Georgie; first he chews off the kid’s arm. This is one fucked up sewer-dwelling clown-beast. 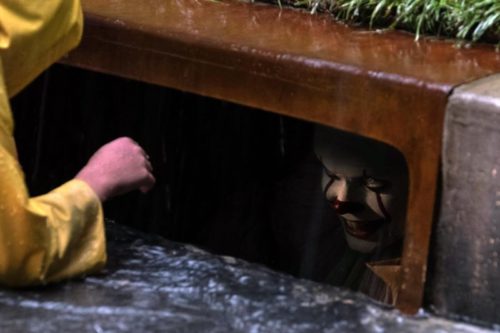 But this highlights It’s problem. There is no scene scarier. We see the clown, he is utterly terrifying, he kills, and there we are. This is It! Run for your lives!

Which is not to say the rest of the scary scenes are, in and of themselves, less scary than the opening. Different awful things happen, It takes different forms, the climax is, of course, longer. But there’s a flat line to It. The terror doesn’t build. We’re a long way from Jaws here.

Each of the kids gets a scene where they meet It in one of It’s guises for the first time. There are a lot of kids. Seven. So that’s seven sequences—all effectively scary, but none scarier than any other, and I mean at a certain point one thinks, okay, I get It, they all see the scary clown, let’s get to the story here.

Each of the kids is troubled. In King’s 1100 page book, fine. Plenty of space to go into detail. In a two hour movie, each of the kids gets about one scene of background to match their one scene of horror. And in the second half of the movie, too damn many of them deliver a Big Emotional Speech. 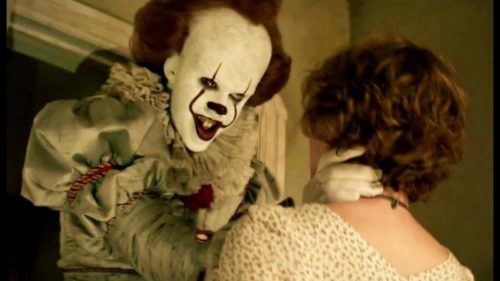 The kids don’t feel like actual kids. This isn’t the actors’ faults. They’re all good. But they’re written the way adults write kids when they’re reflecting on childhood, and seeing as It is, thematically, a story of adults reflecting on and dealing with the horrors of childhood, this tendency of writers is magnified. Which magnification leads to a group of eerily self-aware, reflective kids ever eager to expound on the life-changing, sure-to-profoundly-affect-them-as-adults experiences they are, at this very moment, experiencing, so come on guys, let’s get a good group hug going before we ice this fucking clown, amirite?

If only It had been built to build, it could have been a much more powerful movie. There’s just nothing to It, story-wise, no feeling of any of the characters having to do anything in particular—aside from killing It. Eventually one of the scenes of horror goes on long enough to be the climax, and that’s It.

If you’re a fan of modern horror movies, where demon-possessed children move herkily and jerkily and whatnot, I imagine you’re going to love It. Because It’s monster is better than any I’ve seen in ages, and I’m a hard sell on a lot of modern-day horror. This clown is serious business.

So It isn’t bad. If all you need are scary scenes of a demon clown, It brings it. 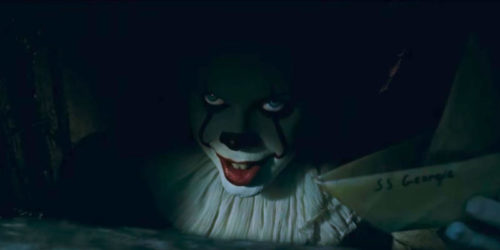 2 responses on “It Is Okay”