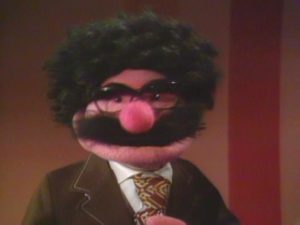 Result of writing too many boring movie reviews

There are those who write movie reviews for a living. I don’t envy them. Cranking out 500 words per movie, day in, day out, must exact a serious movie-joy-killing psychic toll over the years. I make an effort only to write about movies that inspire in me something to say, and still, after five and a half years of doing so, I find myself watching fewer and fewer movies I have anything to say about. This isn’t necessarily an issue with the quality of the movies I’m watching. Good or bad or, as is, unfortunately, most often the case, somewhere in between, I’ve just found myself thinking, what’s left to say? It feels like anything that could be said about any one movie has already been said about another. New movies, old movies, I’m watching as many as ever, yet every time I sit down to write about one, my eyes glaze over the moment I begin describing, yet again, an actor’s performance, a story’s arc, a gag’s landing, etc.

Mostly that’s all I want to write: Etc. As in, you know the drill. You know what comes next.

Take Lady Bird, the perfectly good coming-of-age comedy/drama by first time director/writer (but longish time indie actor) Greta Gerwig. I wrote 400 words and then woke up with drool on my keyboard. I’d bored myself to sleep. Because what’s there to say about a pleasant movie telling a familiar story that’s funny and well made if not exactly revelatory or new? There must be something to say. A story’s originality or lack thereof can’t be the problem. We’ve been telling the same stories for thousands of years. We’re looking for new voices, then. It’s the way a story is told, ever thus. 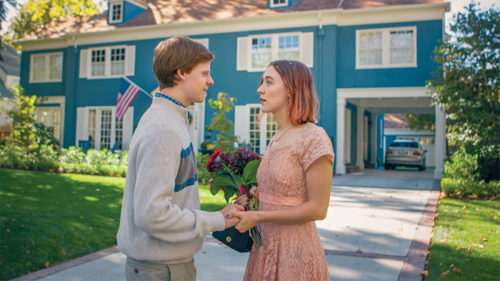 Gerwig’s voice is just fine. It’s nice. Lady Bird is a very nice movie. Everything you expect to happen in this story happens, just the way you expect it to. Which is less of a knock than it sounds. Did I say it was a nice movie? It’s a nice movie. Maybe it could have been a touch less nice. Coming from a new writer/director, maybe I’d hoped for something like an edge, however tiny. I enjoyed Lady Bird, but was in no way excited by it. It could have come straight out of Hollywood. If I hadn’t known, I’d never have guessed it was made by a new indie filmmaker. It’s very polished and professional. Which is also not a knock. Maybe Gerwig is destined to become a director of large-budgeted, fancy-actored Hollywood movies. Hollywood could sure use more female voices telling their stories. Even crappy stories. Like Wonder Woman.

Wonder Woman is a crappy story (though opinions differ) directed by Patty Jenkins (and notably written by Zack Snyder and any number of other men). I only just got around to watching it. It’s not as bad as Batman v Superman, but then neither is having your eyes gouged out by rabid, spork-wielding woodchucks. Wonder Woman is, nevertheless, fantastically bad. This is an allegedly feminist movie that features as a major gag Wonder Woman trying on every outfit at the department store, because that’s ladies for ya, amirite, fellas? Every dang outfit! Hi-lar-ious! 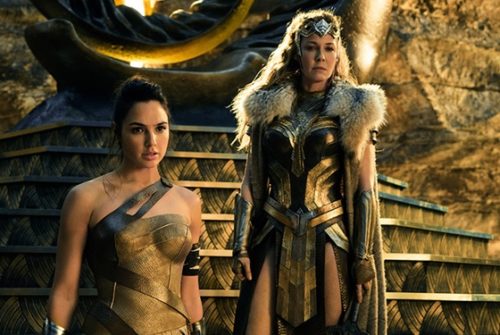 The warrior god prepares for battle

This is a movie that features Wonder Woman, an actual god, walking through the big city with eyes as wide as Darryl Hannah’s in Splash, cooing such lines as, “Why do people hold hands?” and “What is love?”

This is a movie where Wonder Woman, whose entire character is based on her alleged abhorrance of war and killing, blindly murders countless Germans. Which I guess because they started the war is okay. They’re just getting what’s coming to them. Wonder Woman dispatches them without a thought. Killing bad guys seems to be written into her DNA.

When at least she meets the German she thinks is the evil god Ares, she plunges a sword through his chest. When she learns he’s not Ares, does she sweat having murdered some guy in cold blood? Not at all. He was asking for it. 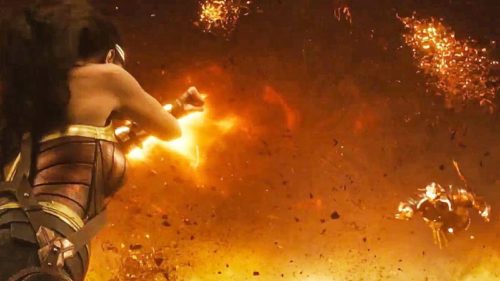 Only at the end, when Ares sums up humanity’s evils (quite accurately, it should be noted), only then does Wonder Woman refrain from killing someone—the one someone she actually maybe should have killed, assuming killing some number of Germans was on the menu.

Finally, if there’s one thing no comic book lacks, it’s the clarity of the antagonists’s goal. They want to destroy the protagonist/the good humans/the Earth/the entire universe. Easy-peasy. Nothing could be simpler to communicate, no matter how dreadful one’s script.

Not so Wonder Woman. She’s after Ares, the God of War, who, actually, n.b., doesn’t cause war, nor cause humans to wage it, no, Ares just nudges humans towards slightly more war, or then again, the same amount of war, but slightly worse war. Therefore, if Wonder Woman kills him, there will be, I think, the same amount of wars, but not quite as bad wars. Which is why, when she kills him at the end of the movie, at what isn’t quite the end of WWI, we know that WWII will be not so bad as…um…hm. Well, the point is, it could have been worse.

Speaking of WWII, where was Wonder Woman hiding? I understand she finally learns that killing people isn’t exactly cool, even if they are Germans, but couldn’t she at least have kidnapped Hitler and maybe tied him up in a basement for a few years?

Take THAT, ya lousy Naz–err, sorry, what war is this?

The WWI scenes in Wonder Woman are absurd. The carnage of WWI is beyond human imagining. If you can even begin to grasp what a killing field filled with millions of corpses is like, a field over which yet another battle is waged, adding yet more millions of corpses, a field into which you are marching, chest deep in mud and blood and body parts, while machine guns rattle and ordnance explodes all around, your mind may be on its way to scratching the surface of that war’s reality (and this, really, is as far as any of use are going to get to understanding it, having had the good luck not to have fought in it).

Does Wonder Woman need to go into that level of reality? No. It’s a comic book. But trying to argue that some magical god is fractionally responsible for the horror of WWI, then having your hero come to stop him at the last minute of those four years of horror, and then implying you’ve accomplished something of value when the impossible misery of WWII, not to mention the rest of the 20th century’s cavalcade of death and carnage, is on the horizon, is bonkers, comic book or no.

I found myself thinking about Superman watching it. Not Snyder’s recent murderfest version, but the one from ’78. We live in different times, we’re told, when we wish for a Superman more like Christopher Reeve’s, but the ’70s were hardly innocent times. Much the opposite. Yet Reeve plays Superman as a hero. He spends the movie saving people. He doesn’t need to murder anyone. He’s a beacon of hope. 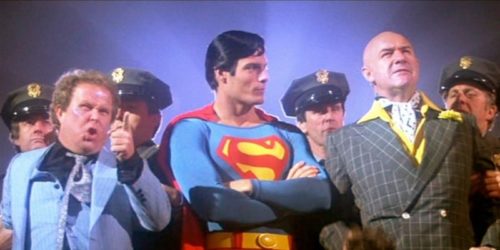 Superman, not murdering his enemies.

Well, so too is Wonder Woman. Isn’t she? Isn’t that the idea? That a god whose people escaped slavery is now here to help? Why, then, is she running around with a sword killing people? According to a comics-knowledgable friend, only in recent years has Wonder Woman begun swinging a sword, and that only in a limited series. But the fans liked her with a giant silver dick, so that’s her thing now. Fits quite nicely into the Snyder-verse of murderous superheroes. How else could Wonder Woman inspire us than with her phallic sword stabbing evil-doers? It appears to be a stumper of a question.

In short, I kind of hated Wonder Woman.

Also? I’m very happy it exists. Equality in Hollywood means roughly half of all of these terrible, lousy, boilerplate movies—which make up at least 90% of Hollywood’s product—being written and directed by women and featuring female characters, including universe-saving superheroes. Presently you can list the number of women directing massive-budget Hollywood movies on one hand. We have a long way to go. When we talk about that latest awful piece of crap that cost $200 million to produce, it should be just as likely directed by a woman as by a man. Then we’ll have equality. Wonder Woman is one step in the right direction. 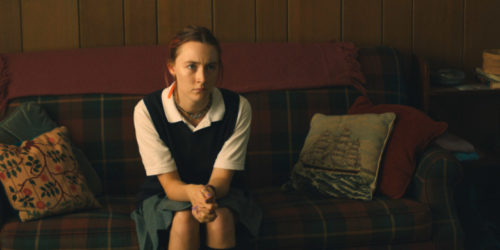 Lady Bird knows who to watch

One new director to keep an eye on? Greta Gerwig. Because really, Lady Bird is a nice movie. You should see it, it’s so nice. Saoirse Ronan is just swell as Lady Bird, and Beanie Feldstein is just as good playing the required slightly chubby best friend of the quirky unpopular yet actually thin and beautiful lead, and the boyfriends are just the way you remember them from your high school years (or then again, from the high school movies you love?), and mom (Laurie Metcalf) is at least as mean as you thought your mom was when you were in high school, and dad (Tracy Letts) is just as goofily lovable yet distant, and the drama is just as cute for being the kind of drama you imagined was dramatic when you were in high school (or then again, from the high school movies you love?), and Sacramento, where Lady Bird is set and where Gerwig grew up, is exactly as boring a city to grow up in as the city you went to high school in, but you know what? It’s all going to be ok—because in the end, we go to that college we wanted to go to, and the world is revealed to be big and exciting, and already our not yet year-old memories of high school are infused with a pleasant nostalgic yearning. Aww, heck.

All of this, by the way, as I started out saying some time ago, is just fine. We need our familiar stories told anew for new generations by new voices, even if those stories fall rather far on the side of the familiar. I look forward to what Gerwig comes up with next.

I also look forward to finding ways to write about movies that don’t amount to cut-and-paste 500 word reviews written for the sake of writing reviews. Which I realize the movie-writing mind-games doing battle in the depths of my skull don’t necessarily interest you, the not exactly earth-tiltingly large number of Mind Control readers, but hey, babbling about it resulted in me writing about not one but two movies in this meandering, sprawling post. This, today, in my current mindset, I consider quite an accomplishment. Hoorah!