Other times you watch three movies and, having nothing to say about any of them, you think, “I’ve got it! I’ll write about all three of them at once, masking my lack of insight in a wordy miasma of false equivalences and discursive meanderings hurried blog-readers won’t have the patience to realize are as empty as the latest Tom Cruise flick.” 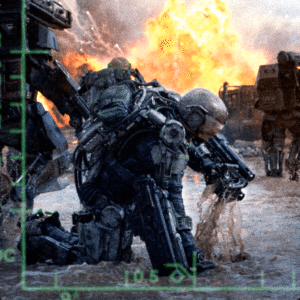 Speaking of which, have you heard about the new book on Scientology, Going Clear, by Lawrence Wright? Hell of a read. I thought I knew quite a bit about L. Ron Hubbard’s insanity and its resulting religion, but this book goes deep. And part of that depth includes the bizarre world of Tom Cruise, the best friend Scientology ever had. I didn’t know half of the evil shenanigans perpetrated by these madmen. The sheer volume of evil Scientologists have unleashed in their brief existence is beyond impressive. Well done, sirs!

Computer nerds of the early ‘80s are well known for being, on the whole, far less evil than litigious Scientologists. Andrew Bujalski’s Computer Chess, a wee little black & white indie flick set in the early ‘80s at a computer chess tournament held over a weekend in a hotel conference room, is not at all evil. It commits a different crime. It’s uninteresting. I’m not going to call it boring, because boring is almost a badge of honor these days. You call a movie boring and its fans jump all over you exclaiming that boring is the point, man, this ain’t Wild Hogs starring John Travolta.

Who the Church of Scientology insists isn’t gay. By the way. And they’ve insisted as much for close to forty years now. Because if there’s one thing Scientologists are certain about, it’s that being gay is an aberration in need of correction and/or punishment. Scientologists are in fact very big on punishment. Seriously. You should read this book. It’s bonkers. 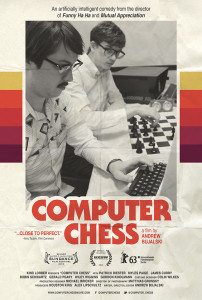 Computer Chess isn’t bonkers, which is also, you may or may not recall/know, an awesome ‘80s board game. “Bonkers” is. The movie, Computer Chess, only features chess. No board games. (I’m still waiting for the movie version of “Sorry”). It’s shot on what looks like cheap VHS, only here’s the problem with that: it doesn’t actually look like cheap VHS. It looks like it wants to look like it. Because it wants to look like it was actually shot when the movie is set. Which I found distracting. From the get-go it looked like a modern movie trying really hard not to look that way, bad mustaches notwithstanding.

The story involves a number of teams who’ve programmed their own chess programs, which programs are pitted against one another in the weekend-long tournament, with the ultimate winner playing against the guy who runs the contest. There’s one woman in the movie. She is exceptionally nerdy. There is also only one woman in Crystal Fairy. Francis Ha is full of women. 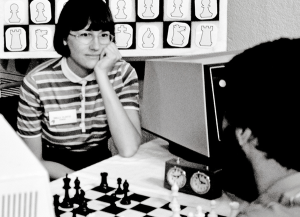 I might here make mention of the Bechdel Test and how these movies rate on it, but seriously, people, this “test” is nothing of the sort. It’s absurd to discuss individual movies in relation to it. As a very general way of noting the lack of female roles in the history of film, fine. No reason not to call more attention to that issue. But as a way to discuss specific films? No. It’s useless. You can name endless movies with female protagonists that don’t pass it, and horrible, sexist pieces of trash that do.

Look, as soon as you’re talking about a movie with a male protagonist, it shouldn’t pass the “test.” Why would you have two characters in a scene talking about something unrelated to the protagonist? You wouldn’t, unless you were a crappy screenwriter. Plus the moment you call it a test, you imply that to fail it is to be a crappy movie. The Godfather begs to differ. Anyway. I could go on. The point is that modern films don’t need a bunch of extraneous female characters calling each other by name and talking about, e.g., bicycle repair, cat pajamas, and post-modernism; what’s needed are more women in the industry and more movies with female protagonists. Let’s not restrict their conversational content.

The men who currently decide which movies get made. And who judge ’80s computer chess tourneys.

Neither Crystal Fairy nor Frances Ha were directed by women, though the star of Frances Ha, Greta Gerwig, co-wrote it with director Noah Baumbach, known for his small, character-based movies such as The Squid And The Whale and Margo At The Wedding, and for co-writing one of Wes Anderson’s more twee and exasperating (which is saying a lot) movies, The Life Aquatic. 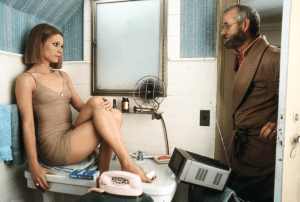 Speaking of whom (Anderson), I just watched The Royal Tennenbaums for the first time in ages, and the thing about it is that it still doesn’t do much for me. It’s not so much that it’s bad—it’s better than most of what’s come after (“most” because I admit I have a weirdly soft and lumpy spot for The Fantastic Mr. Fox, which I can’t presently explain (something do to with a youthful Roald Dahl infatuation? (maybe, but I loved Sendak too, and sweet Xenu above, have you seen Spike Jonze‘s Where The Wild Things Are? My inner child is crying tears of blood at the mere mention of it))—but the thing about Tenenbaums is that it solidified the format for all of the Anderson movies to follow, where every character is essentially another wackified version of Max from Rushmore, Anderson’s masterpiece, in which, unlike the movies to follow, the characters around Max are more or less normal. Only Max is fully Andersonish. In part—a big part—that’s why Rushmore works so well. 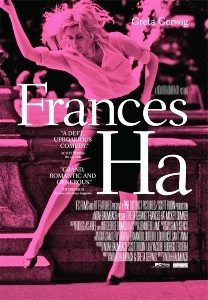 Another movie that doesn’t work as well as Rushmore is Frances Ha, despite the excellent performance by Greta Gerwig at its center. She plays a late 20s woman in NYC, a dancer whose dancing is going nowhere, who’s all adorably nutty in the way we like our adorable nutty NYC women to be. Realistically so, to be sure. We’ve all known a Frances. She’s endearingly loopy for quite a while before she winds up at a dinner with a group of rather more sane and accomplished acquantances. And suddeny her loopiness comes off as childish and dumb. Until later, after dinner, when she describes the kind of love she dreams of falling into, which description, though a bit of a cliché, is delivered in a manner loopily poetic, thus disarming her listeners.

So this Frances has some depth. Only her story, by the end, is awfully pat. She charges a weekend trip to Paris on her credit card, has a terrible time, comes home to find out the obvious: she’s not being asked to join the dance company where she’s been studying. But they’ve got a swell job in the office for her, and she can still teach dance to kids, and she’s also a choreographer, and everyone in the movie comes to see the big performance at the end, and you know what? I think everything’s going to work out fine. 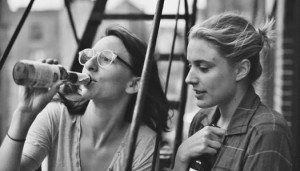 Frances and her best buddy

Which it’s fine for things to work out fine, but in the case of Frances Ha, I don’t quite get what the filmmakers want to say. I guess they’re saying that even if things seem ever so slightly lame in your late ‘20s, even if you only get to go to Paris for one weekend, and even if the jobs that land in your lap aren’t precisely what you’ve always wanted, your creative dreams will blossom off-screen and all your friends and detractors will love you. Isn’t that swell? Growing up is only one wacky adventure away!

It’s nicely shot. The black & white, no doubt inspired by the look Gordon Willis gave NYC in Woody Allen’s Manhattan, looks a million miles better than that featured in Computer Chess, and it’s edited with real style and momentum. 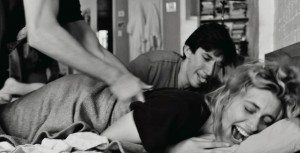 Frances and her charming male roommates

Computer Chess didn’t stick with me at all. I barely remember a thing about it, and I watched it a week ago. There’s definitely a problem with one of the chess programs, and there’s this programmer who never sleeps, and in the same hotel there’s a group of swingers hanging out practicing a sort of new-agey group healing and one couple comes on to the nerd guy, which is kind of funny. He runs away. As for the girl, I’m not sure much happens with her. There’s also these two weird guys in the hotel who do a lot of drugs and talk philosophically about I can’t remember what. 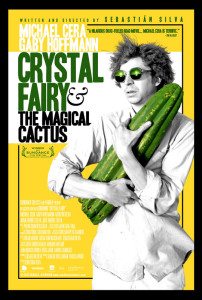 Crystal Fairy, or more exactly, Crystal Fairy & The Magical Cactus and 2012, is all about drugs, specifically the mescaline one can extract from the skin of a certain cactus. Michael Cera plays Jaime, the most irritating guy on the face of the Earth. He’s an American traveling in Chile with only one goal: to find that cactus and trip out. His Chilean friend arranges a road-trip out to the coast with his two brothers and Jaime. Along the way, they plan to stop in a town where the cacti grow. Only Jaime, in his irritating way, at a party the night before they leave, drunkenly invites along this wacky American girl, Crystal Fairy.

As her name suggests, she’s all dreamy and ridiculous in what at first is a pretty stereotypically hippie way, but as the movie progresses she becomes a deeper, more complex character. Jaime, meanwhile, you want to punch. He has one concern: himself, and how he’s going to that self high. 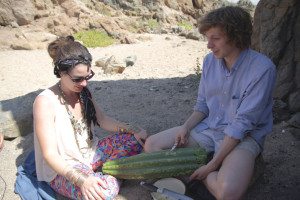 Cera introduces his cactus to Hoffmann

He steals a chunk of cactus from a nice lady’s yard and eventually the group makes it to the beach, skins their stolen cactus, and boils it up to produce the hallucinogenic drug. Then they trip out.

That’s pretty much the whole movie. Through the experience, Jaime learns something: to care about someone other than himself. It’s not a blatant thing. It’s handled subtley. Jaime’s still the same pain in the ass at the end, but it’s like you can see a ray of humane light poking through his thick, annoying skull. It’s less that he’s been changed and more that his experience knowing Crystal has begun a process within him you can only hope results in his becoming less of an ass. 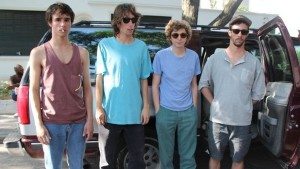 Gaby Hoffmann does a wonderful job as Crystal. Like Frances, Crystal is a woman we’ve all known; her name says it all. And Jaime, he’s a guy we’ve all known, the absolute last guy you’d ever want to take a hallucinogenic trip with. He drives everyone completely insane with his endless selfish whining. I guess Cera has grown tired of playing lovable. Between this and This Is The End, he’s really exploring his annoying side. 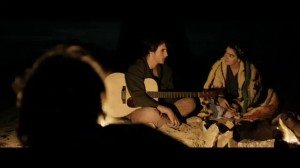 Playing guitar around the fire

Sebastián Silva wrote and directed Crystal Fairy, though the script was more of an outline, with the dialogue improvised along the way. Which sort of thing doesn’t always work. This time it does.

Of these three movies, Crystal Fairy is the one I’d recommend. It’s one of those deceptively simple movies where almost nothing happens, yet feels satisfying when it’s over.

Also satisfying? The Scientology book. An L. Ron Hubbard biopic, now there’s a movie waiting to happen. And I don’t mean a movie obliquely referencing him, i.e. The Master. I mean one that minces no words, that tells it like it’s told in this book. Maybe it could star John Travolta.