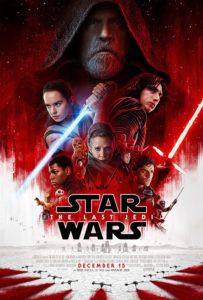 I didn’t read the second half of the opening crawl of Star Wars: The Last Jedi. I was too gobsmacked by the significant grammatical screw-up in the first half (in short, a “band” is a singular noun, of which fact verbs must take heed). Is this a minor problem with the movie? Oh god yes. This movie is nothing but problems. It is, however, a fitting omen. When they can’t even bother to copy-edit the opening crawl, what can we expect from story and character?

The Last Jedi might be worse than The Force Awakens. At this point we’re comparing train wrecks, so it’s hard to tell. They’re both trains, they’re both off the tracks, they’re both on fire, and broken bodies are hanging out the windows of each—who’s to say which one is “worse”? Opinions will differ.

What one must say is that, despite the general nerdgasm of love each of these movies is greeted with, The Last Jedi is a failure of character, of story, and of screenwriting in general. Lucas had us in fits when he tried to explain away the boredom of his prequels by saying, “Relax—they’re kids’ movies!” Yet never has a major Hollywood production not specifically aimed at the under five crowd been more suited to them.

I’ve spent a lot of in-theater hours shaking my head at expositional dialogue. Characters repeating in words exactly what’s on-screen, as though without being told what I’m watching I’d lose the thread and wander aimlessly out to the street to be, in my addlement, run over by a bus.

The Last Jedi doubles down on exposition in literal fashion. Not only is most of the dialogue exposition, many of the lines are re-worded and repeated by different characters. One assumes this is for the benefit of foreign markets. By keeping the dialogue as simple as possible, by having most of it describe what’s already on-screen, and then by repeating it with slight variations in phrasing, no one, no matter how poor a translation they might be listening to, will be confused at any given moment.

Any given moment. This is how movies like The Last Jedi function now. As long as what’s happening right now is clear, what’s happening in the overall story may be ignored. The movie might be nothing but a string of expositional scenes punctuated by action set-pieces. But within scenes, the goals of the characters are laid out—multiple times—and acted upon as simply and directly as possible. Go to the bathroom, buy some popcorn, text and tweet to your heart’s content, watch it on your phone, it doesn’t matter. Every scene begins with someone explaining everything you need to know to follow that scene. 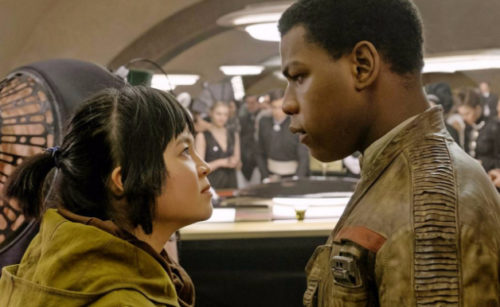 So begins the b-story nobody wanted.

It’s so blatant it’s comical. Finn and Rose meet up and concoct a plan to disable the First Order’s tracking device. Sounds complicated! What’s a tracking device? Does it track you? What’s “to disable”? I’m already lost. They trade a few lines describing this profoundly complex idea and then—bam! Cut to a shot of Poe asking them to say it again, but more simply. Which they do.

I’d love to imagine this is a purposeful gag, a jab by writer/director Rian Johnson at studio executives’ script notes. “Could they repeat their plan, but, you know, more, like, simplified?”

The funniest example is at the end, when Luke faces down Kylo Ren. It’s a big scene, by gosh. Here it is, we think, the final showdown! They’re about to get into it when—we cut to Poe and the other rebels. Poe says, and I’m barely paraphrasing here, “Luke Skywalker is facing down Kylo Ren—all by himself!” Cut back to the fight.

Filmmaking is about choices. The choice here is to cut away from your showdown to have another character announce what is obvious to him, to every other character in the movie, and to everyone watching the movie. Why? Who is this line for? 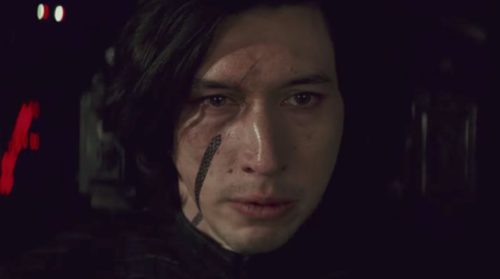 The saddest villian in the universe

What I disliked most about The Last Jedi is how it treats the audience like idiots. Or, to be kinder, like five year olds. Financially, I see where this makes sense to Disney. Entertainment-wise, it hurts to watch. To be thought this stupid. Are we?

Then there’s the humor. It’s depressing. Every gag is made at the expense of either the movie we’re watching or The Force Awakens. This is the current rage in movie humor, courtesy of Marvel, where characters crack jokes that make clear their knowing superiority to the movie they’re in. It’s a way of stepping outside the confines of the story and joining the audience in mocking the silliness of it all.

The net effect is to rob the movie of any real emotion. If no one in the movie takes it seriously, why should we? The Last Jedi lays it on thick in the opening sequence. General Hux and Poe play out a scene best left in whatever children’s sitcom they stole it from. I felt embarrassed for the actors watching it, but this is where we are now. Every real emotion is to be laughed at, nothing matters, it’s all just Twitter-fodder anyway. And when there’s a scene requiring something real? It’s too late. As silly as, for example, the original Star Wars is, as much as we might laugh at its goofiness, none of its characters think it’s a joke. This is why we in the audience can both laugh at it and connect with it emotionally. By making jokes that reference the movie from the audience’s perspective the filmmakers score easy laughs. It’s a way to make an easy connection, with a wink and a nudge. But it’s not an emotional connection. Ultimately it does the opposite of what’s intended–it pushes us away from the movie. It kills any real connection we might have made with it. 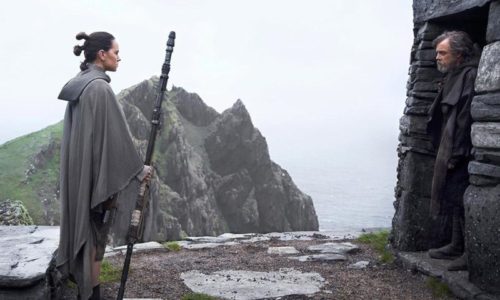 That exciting scene where the thing happens

Worse yet are the flat characters. Who is Rey? The movie has nothing to say about her. Apparently she wants to learn from Luke because the audience thinks he’s her father. Their scenes together are meant to mirror Luke’s training with Yoda, yet there’s no emotion driving it. Rey is an emotional blank and there’s no actual training. These scenes exist outside the movie as reminders of scenes in a previous movie we liked. They’re indicative of scenes without being scenes themselves. It’s all emptiness.

Finn is treated even worse. Who is he? What does he want? To help? He’s a nice guy who wants to help. And…well, no, there is no and.

The story of The Last Jedi is so thin it’s hard to know what to think. “Kill the old” is the theme, which fans of the movie are reading as an indictment of all the Star Warsing that came before and an embracing of the new. Which is odd, since nothing that happens in The Last Jedi didn’t happen in a previous outing. Luke’s fate is the most ridiculous example. He goes out in precisely the same way as Obi-Wan. What’s worse is how the filmmakers play it as though they tricked us—Luke isn’t even there! He’s not letting Kylo kill him like Vader killed Ben! He’s sitting on a rock a million miles away! Only then—he dies. So, let me see here, he fought the bad guy as a distraction to let the good guys get away, even though in doing so he sacrifices himself. Got it. Totally new idea.

Only wait, why did Luke do what he did? Poe, a little help here? “Luke is fighting Kylo for a reason—what is it? WHAT IS IT? Ah! I’ve got it! He’s doing it as a distraction. Everyone’s distracted! We should run away now. Run away!” Thank you, Poe.

Because there’s no pacing to the movie, there’s no sense of when it might end. When you spend twenty minutes of a movie thinking the scene you’re watching has to be the finale, and then it isn’t, there is a major problem with the writing. There’s no sense of movement, no sense of arriving at a place you’ve set out to reach. Things happen, at one pace, steadily, from beginning to end. With nothing at stake that we’re aware of, what’s to hope for? What’s to fear? What means losing? What means winning?

When Luke abandons Yoda in Empire, it’s a huge moment. He’s throwing away his training, he’s going too early, we’re right there with Yoda, not wanting Luke to give up. And at the same time we’re with Luke. We want him to go. His friends need him. Only a little green swamp-monster would let Vader kill them. We care about these characters. Their choices matter to us. We want what they want and fear what they fear.

As the same scene plays in the new movie, when Rey leaves to meet up with Kylo, what’s she abandoning? Her training? There is no training. Her scenes on the island are perfunctory and exist for no other reason than to keep her apart from Kylo, with whom she has telepathic chats. There’s nothing happening between her and Luke. It doesn’t matter if she leaves. She leaves to fulfill the needs of the plot. We have no reason to be concerned for her because we don’t know what matters to her. Fears and desires drive people. She has neither.

I used to play a story-telling game in high school with friends. One person would write an opening paragraph, then pass it to the next person, who’d continue it with a second paragraph, and so on. In the early days, being friends with a bunch of wags, we’d write a lot of continuing paragraphs starting with, for example, “But they all died. Meanwhile, a frog named Mongo…” or “Then Bob woke up and realized it was all a dream. He took his frog Mongo out for a walk…” and etc. Erasing what came before and starting anew because we thought it was good for a cheap laugh.

And it was good for a cheap laugh. It was lousy for the story. Soon we learned how to take what was given us and go with it. The stories turned out much better and much funnier.

The Last Jedi is a frog named Mongo.

The Force Awakens was a series of tenuously connected scenes designed to evoke nostalgia for Star Wars by semi-remaking it. There was no need to think about what might come next. The Last Jedi goes to much trouble not only to forget what came before it, but to actively ridicule it, to, you might say, toss it over its shoulder for a cheap laugh. By the end, every thread left hanging in The Force Awakens is laughed off, ignored, erased, or just flat-out killed.

In the next chapter, the antagonist is who? Kylo? The bad guy who from his first scene has been played as a conflicted good-guy-to-be? He’s all we’re left with. Hux is a sit-com dad, and Snoke is dead.

Trilogies work best when they’re conceived as three smaller stories making up a larger one. When chapter one is made without concern for chapter two, when chapter two exists as nothing but a rebuke of chapter one, what’s left for chapter three? Is it even part of a trilogy anymore? Or is it just another stepping stone leading nowhere? 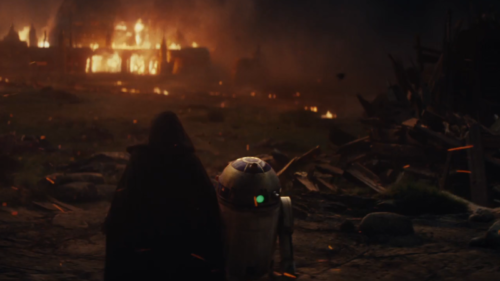 Can’t believe they stole the end of The Sacrifice.

2 responses on “Star Wars: The Last Jedi Is A Frog Named Mongo”