I’m not going to pretend to understand the physics, chemistry, biology, endocrinology, geomorphology, horology, conchology, myrmecology, selenology, or teratology of the impossibility of sitting through the entirety of the 2007 shoot ‘em up flick Shoot ‘em Up. I am only here to state that it is true. I defy anyone to sit through this movie in one go. It cannot be done. Even if you say you’ve done it, I must humbly refuse to believe you. Maybe you watched the beginning and ending on an airplane between a long nap. Maybe you watched it in seven minute, non-sequential increments on TV over a two-year period of late-night, post-party, half-drunken cable-flippings. Maybe you’re confusing having seen it in its entirety with that time you watched a wall of wet off-white paint drying on a cool winter’s afternoon.

Maybe you are a liar. 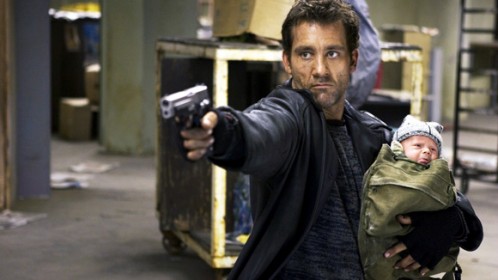 Truth be told, I don’t think anyone has ever watched Shoot ‘em Up from beginning to end, and that includes its writer/director, Michael Davis, who claims his inspiration came from the hospital scene in John Woo’s Hard-Boiled where Chow Yun-fat shoots dead 97,000 evil-doers while saving just as many new-born babies. Hell of a sequence. Shoot ‘em Up offers nothing comparable. At least not in the hour of it I forced myself, eyes mechanically held open to the strains of Beethoven’s 9th, to wade through. I only made it that far by convincing myself anyone could sit through an 86 minute modern action flick. I believed that lie until I could believe it no longer.

What happened after that first hour I would never know if not for the internet. Something to do with baby harvesting and gun control. I mean the movie, not the internet. Although I guess the internet, if you stand back and really take a good, hard look at it, does have rather a lot to do with babies and guns.

But I digress. I have to digress. I can’t discuss Shoot ‘em Up’s story for more than a minute or so before my eyes start to bleed. I’ll type quickly.

The story begins with Smith (Clive Owen) watching a pregnant woman run past him down the street chased by a man with a gun into a warehouse. Smith follows, kills the man, kills another 50-odd men with guns who show up at that very moment, assists with the birth and, when the woman is shot dead by one of another 50-odd men with guns led by mustache-twirling evil-doer Hertz (Paul Giamatti, who eats the most scenery per second of screen-time since Elizabeth Berkley in Showgirls), takes off with the baby. 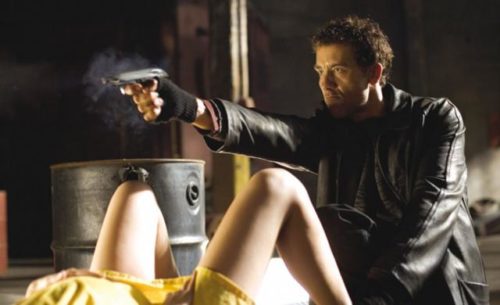 Birth and a gunfight. The laughs write themselves!

Smith brings the baby to the most sensible place there is: a whorehouse, to a whore (Monica Bellucci) known for pleasing diaper-wearing breast-milk fetishists. Who better to mother a newborn? Shockingly, the whore declines.

Cut to Hertz, who, using powers of deduction unknown to humans, says to his henchmen, “Find me every lactating whore in the city!” Because, again, where else would a mystery gunman take a newborn?

Cut to the whore in her room, and Hertz busting in on her. Mind you, this isn’t some kind of movie-edit where a week has passed us by. This is five minutes since Smith left her, and three minutes since Hertz demanded a round-up of Chicago’s every milky-titted trollop.

But whatever. To hell with logic. Such a blatant lack of it is comedy! Or it is when it’s funny. When it’s in Shoot ‘em Up, it’s whatever it is that’s the opposite of comedy. Like testicular cancer or being thrown into a nest of army ants with your pants down. 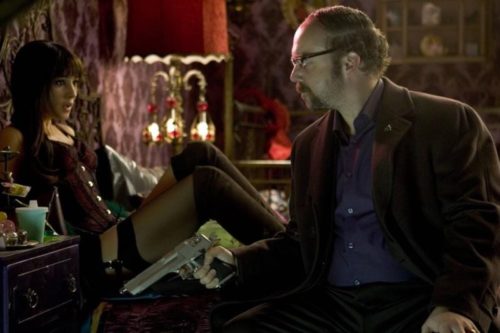 Not the milk bottles. Shoot anything but the bottles!

Also, I think, supposed to be comical? Smith eats a lot of carrots, so bring on the Bugs Bunny insinuations…and laugh? Is that funny? I guess it could be. In another movie. In any other movie. When he’s not eating carrots, Smith jabs them through bad-guy heads. Lethal carroting. When I put it like that, I almost want to watch this thing. (I am not going to watch this thing).

Next up is a lot more running and shooting, none of it filmed with any panache whatsoever, unless you’re a fan of mid-aughts blue/orange, high-contrast, ugly digital cinematography and generically spastic editing.

Seconds after whatever it was that happened last, Smith and Hertz are in a gun factory and, again in mere seconds, Smith rigs up some fifty automatic rifles with strings and duct tape and, like he was puppet-master John Malkovich himself, shoots another 50-odd men with guns.

Is this funny or clever or exciting? It is not.

But what I kept asking myself was, why is this not funny or clever or exciting? It’s not like there’s any shortage of brief, loud, shoot ‘em up action flicks that consist of little more than running and shooting. Liam Neeson makes one a year. At the very least, these movies are watchable. That’s why they exist. To be watched when you don’t want for even a second to think. You’re there for the running and shooting. You don’t turn them off after 45 minutes complaining of flaws in internal logic. You expect an absence of internal logic. You want that absence. You want to laugh at the absurdity.

So why is it physically impossible not to turn off Shoot ‘em Up? What about its running and shooting renders it unwatchable?

It might be this. It might be that, because the absurdity of the movie is so very intentional, because it’s trying so very hard to achieve what the best trash succeeds at naturally, it turns into a satire, a joke, a knowing poke in the ribs. Which might well be enjoyable. If it were five minutes on a sketch comedy show. A whole movie? It’s unbearable.

There’s a scene where Smith and the whore have sweaty naked sex, only to be interrupted by 50-odd men with guns bursting in on them. A gunfight follows, Smith standing, the whore in his arms, presumably still screwing her as he murders his enemies. One can see how, on paper, this sounds like it could be comical. In this movie, one can see how it isn’t.

Seems a shame to be yawning at this scene, but here we are

Then again, I could be wrong. Maybe this isn’t the problem. This sort of knowing over-the-topness worked well enough in Crank. Why not here? Maybe something deeper and more mysterious is going on. Problem is, I have the sinking feeling the only way to find out for sure would be to watch it—any of it—again. I am not going to watch even one more minute of Shoot ‘em Up.

My compatriot at Stand By For Mind Control, the Evil Genius, tried on two occasions to watch Shoot ‘em Up. Both times, he failed. He only made it as far as twenty minutes. And that was the second time, when he was fully aware of what to expect and what kind of physical stamina would be required of him. And yet—twenty minutes. An hour for me. Science demands an answer to what is going on here. Alas, I am not the scientist for the job.

Will one among you dare to test your mettle against this killer of film-viewers? If so, please report your findings. But let me be clear: I am in no way asking you to do this. Stand By For Mind Control will not be held liable for any physical injury up to and including death by boredom/incredulity/internal hemorrhaging.